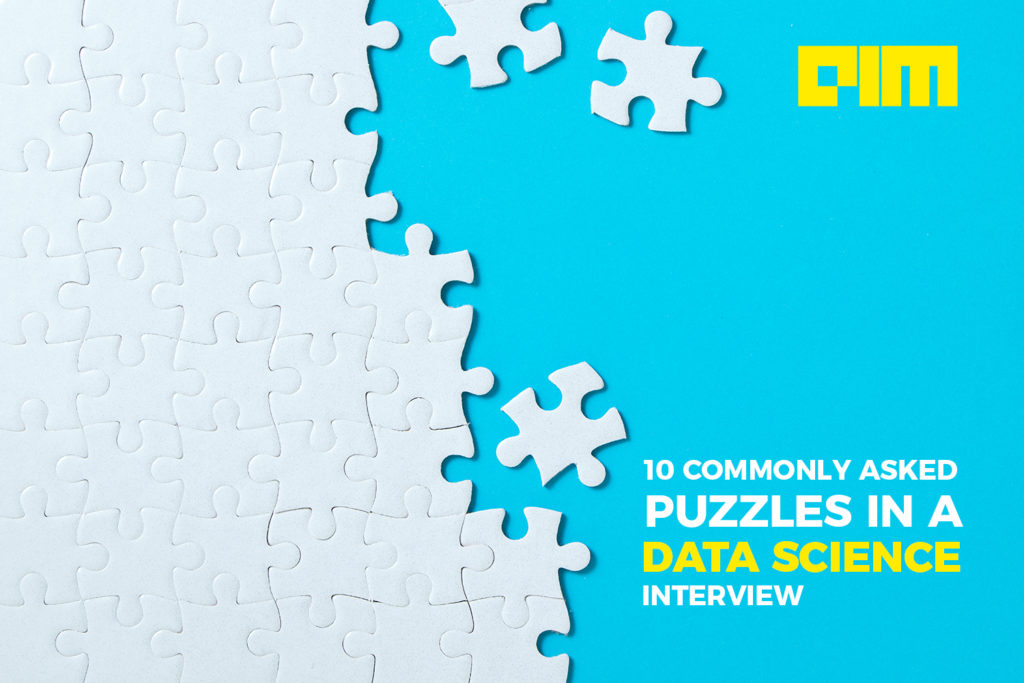 Data science interviews usually consist of questions around the core subject, business case studies, guess estimates and puzzles. Puzzles are a favourite kind of questions among the interviewers especially if the candidate is a fresher and the hiring is being done at a beginner or entry-level. It is to test the problem-solving and out of the box thinking that is a must-have for analytics and data science jobs.

Puzzles are a way to test logical reasoning and lateral thinking of a candidate. In this article, we bring 10 frequently asked puzzles in a data science interview ranging across technical, straight-forward and some brainstorming questions. While the interviewers expect the right answer from you, more often than not they are testing your approach to solving problems and probably your patience. These questions have been compiled from the various discussion portals and from interviewees who had appeared for analytics and data science interviews.

1. Four people A, B, C, D need to cross a bridge at night, and they have only one torch. The bridge is too dangerous to cross without a torch and is strong enough to support a maximum of two people at a time. They take 1, 2, 5 and 8 minutes respectively. What is the shortest time needed for all four of them to cross the bridge?

2. There are 100 black socks and 100 white socks mixed up in a drawer. If you have to pick socks blindly from the drawer, how many socks do you need to take out to be sure that you have a matching pair of socks?

3. There are 9 balls which weigh the same except for one, which is heavier than the others. What is the minimum number of weighings should you perform to find the ball with higher weight?

Therefore, we would need to take minimum 2 weighings to get the right answer.

5. There are two sand timers which show 4 minutes and 7 minutes respectively. What would be the best approach to get a time of 9 minutes using both the sand timers, at one time or one after another or in any other combination?

6. There are four men A, B, C and D buried up to their necks in the ground in a straight line. Between A & B there is an opaque wall. They cannot move and can only look forward such that A and B can only see their respective sides of the wall, C can see B, and D can see B and C. They are all aware that each of them is wearing a hat, and that two of them are wearing a black hats while the other two are wearing white hats. They don’t know what color they are wearing. In order to avoid being executed, one of them must call out to the executioner the color of their hat. If they get it wrong, everyone will be shot. After 60 seconds, one of them calls out. Which one of them calls out? How can he be certain he knows the color of his hat? There’s no outside influence and no other way of communicating.

In the given scenario, A or B cannot answer since they are facing the wall and cannot determine anyone’s hat colour. D can see C and B but cannot determine his own hat colour. This leaves only C with the chances of answering and he calls out that he is wearing a black hat. He is 100% certain as, if D would have seen both B & C wearing white or black hats, he would have answered. But since D is silent, C knows that he must be wearing a black hat as he can see that B is wearing a white hat.

Fairly tricky riddle, this one has a simple approach. Take one rope and burn it at both ends. At the same time, burn only one end of the other rope. The rope which has both ends burning will burn the 2 times the speed of the second one and hence will burn in 30 minutes. At this point, the second rope will have 30 minutes to burn. At this point, burning the other end of the rope will burn at double the speed. So that remaining rope will burn in 15 minutes. Adding up this 30 minutes and 15 minutes gives us 45 minutes.

8. How many times a day do the minute and hour hands of a clock overlap?

This relatively straightforward question, tests your mathematical skills and might require you to go back to time and distance lessons to get the right answer.

Now, according to the concept of relative speed, when two objects say, A & B move in the same direction, then their relative speed is A -B.  Therefore angular relative speed between minute and hour hand is 6 – ½ = 11/2 degrees per minute.

If we consider 12 PM as the reference point where minutes and hours coincide, the angular distance covered between them is 360 degrees.

This means that every 720/11 minutes the minute hand and clock hand coincide.

9. There are 2 jars with 50 red marbles and 50 blue marbles. You need to place all the marbles into the jars in such a way that if you blindly pick one marble out of the jar, there are maximum chances of it being red. While picking, you will first randomly pick a jar and then randomly  pick a marble out of that jar. You can arrange the marbles however you like, but each marble must be in a jar.

Thus, we end up with ~75% chance of picking a red marble.

10. At a party, everyone shook hands with everybody else. There were 66 handshakes. How many people were at the party?

If there are n+1 people.

no. of handshakes = n

So there were 12 people at the party.

You can check more puzzles here.