Programming is an integral part of our IT landscape and we have often observed the shift in the popularity and choice of programming languages. While Java continues to be on top of the stack, Python soars in popularity. This information helps the developer community understand current trends and the language preferred by industry. In our recent study, we noted how Python continues to dominate the market: Python continues to be the tool of choice among data analysts and data scientists and this is reflected in the Indian hiring market as well with 17% jobs listing the language as a core capability.

In this article, we list down 10 interesting facts about programming languages that will help the developer community make more informed choices.

According to the Python Developers Survey 2018 results, 84% of Python users use Python as their main language, on the other hand, 16% of the users use Python as their secondary language. The usage of Python as the main language is up 5 percentage points from 79% in 2017. One interesting fact is that half of all Python users also use JavaScript. Also, 71% of the respondents of the survey install Python from python.org or with OS-provided package managers like APT and Homebrew. 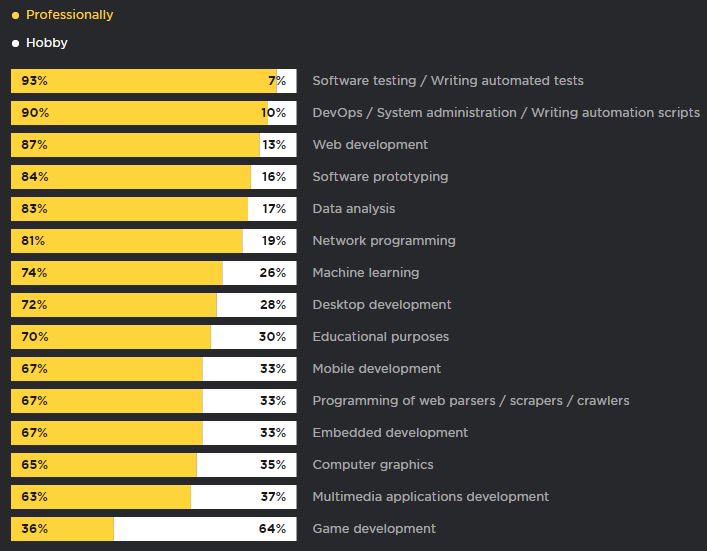 According to the survey, the language Python is mainly used for game development as a hobby, while the other development types such as machine learning, web development, data analysis and network programming are mainly performed as primary activities.

The survey showed that there are 84% of Python 3 main interpreter users and only 16% for Python 2. Python 3 had an increase in users from 75% in 2017. As the use of Python 3 continues to grow rapidly, the use of Python 2 is declining as it is no longer actively developed, also does not get new features, and thus the end of life has been moved to 2020. However, the declaration does not guarantee that bugfix releases will be made on a regular basis, but it should enable volunteers who want to contribute bugfixes for Python 2.7 and it should satisfy vendors who still have to support Python 2 for years to come.

Programmers working on the computer term coding and programming synonymously and use the terms interchangeably. Coding means simply writing codes from one language to another, while programming means to program a machine with a set of instructions. A coder is someone who translates logics into a language which a machine will understand, on the other hand, a programmer deals with much more than just writing codes.

6| Python In Professional Use 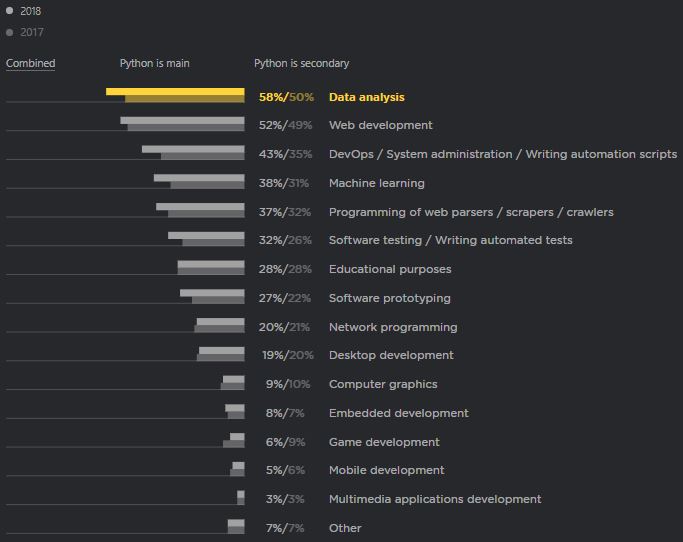 7| PHP Is Not A Real Programming Language

PHP‘s creator Rasmus Lerdorf had no intention to create an entirely new programming language. He had created the language, or interface at the time only for the purpose of managing his personal website. While PHP is recognised today as a recursive backronym for “PHP: Hypertext Preprocessor,” it was originally an acronym for “personal home page,” referring to its use on Lerdorf’s personal website. As the language evolved, so did its meaning.

Scala or the Scalable Language is a hybrid of Object Oriented Programming (OOP) and Functional Programming so, besides having all the OOP features of Java, the language also includes features of functional programming languages like Standard ML, Haskell, etc. Scala has been used by the developers of Netflix, Pinterest, etc. and has become the prominent language for Big data processing.

In the JavaScript language, the definition of Null is the total absence of meaningful value and it is counted as an object in the programming language. On the other hand, NaN or Not-a-Number is actually counted as a number but that does not mean it is equal to anything and in order to confirm that something is NaN, then it must be represented by the function isNaN().

TypeScript, the language that is built on JavaScript has lately shown notable growth.TypeScript 3.4 has been released shortly which has got some important features and updates. It has a faster subsequent build with the — incremental flag, higher order type inference from generic functions, new syntax for ReadonlyArray, etc.