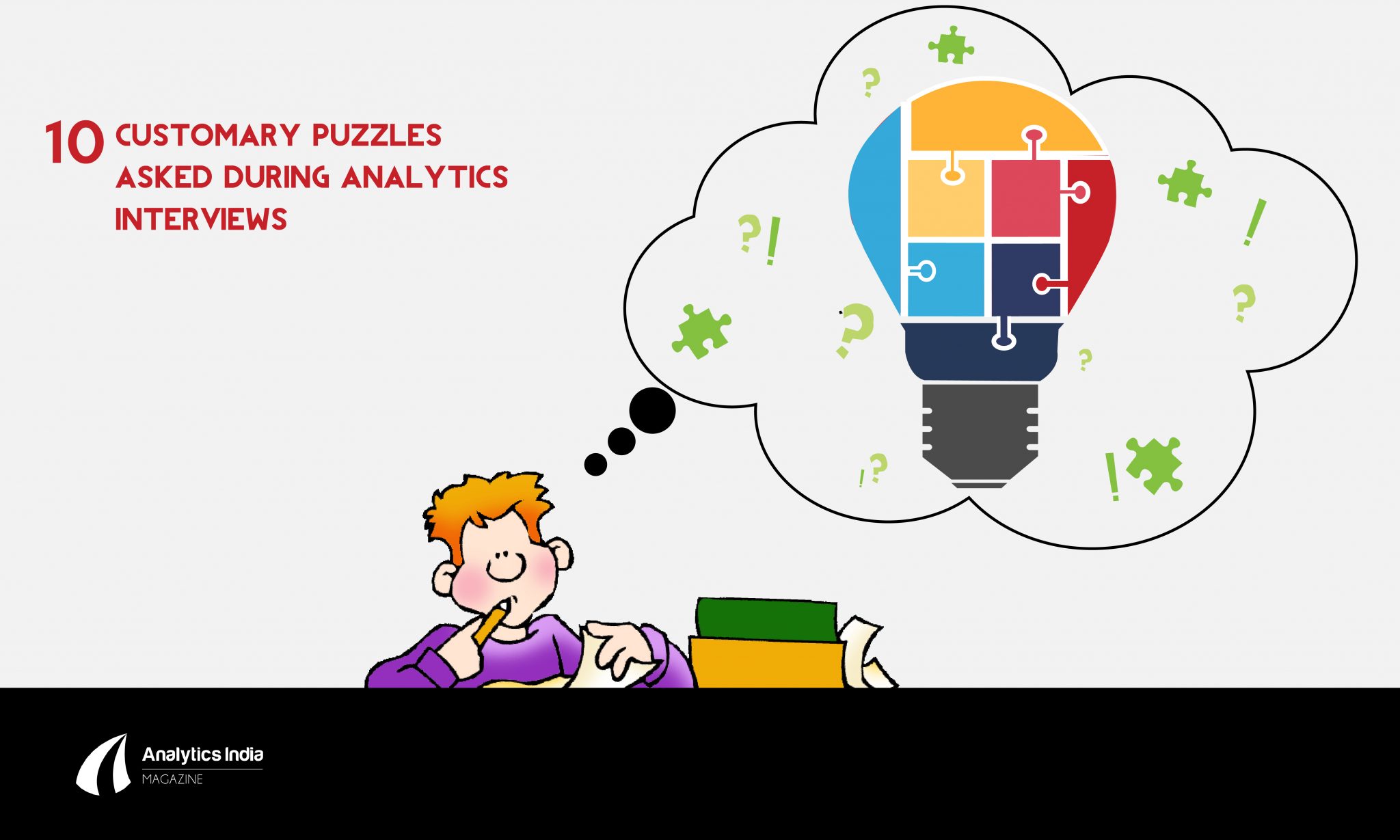 The analytics industry predominantly relies on professionals and analysts who not only excel in extensive use of statistics and Data handling tools but also exhibit excellent problem-solving skills. However, a fresher entering the domain doesn’t necessarily have to know all these skills in advance. So, most of these interviews entail puzzles, logical reasoning problems, and questions that help in testing a candidate’s lateral thinking. This assessment enables the interviewer to assert the candidate’s logical reasoning problems and questions to test lateral thinking, which is an important part of most analytics job interviews.

Most of the puzzles asked during analytics-based interviews can be generalized into 3 sections – technical, straightforward, and the ones unsolvable. It’s advisable for aspiring candidates to practice these puzzle sets in advance, so as to gain more proficiency. The most ideal approach to solving these puzzles is to focus on the data provided while developing a structured approach. Most importantly, you must be able to explain your approach to the interviewer. Let us glance through some of the most common puzzles that baffle candidates appearing for analytics interviews.

You can also test yourself on data science interview puzzles at the mock assessment in MachineHack.

1. There are 5 lanes on a race track. One needs to find out the 3 fastest horses among total of 25. Find out the minimum number of races to be conducted in order to determine the fastest three.

This is one of the most common interview puzzles asked by analytics interviewers. This puzzle tests interviewee’s approach to solving the problem. The approach entails conducting 5 races where each race group would involve 5 horses. In the ensuing step, a sixth race is conducted between winners of first 5 races to determine the 3 fastest horses (marked A1, B1, A=and C1). The seventh race is conducted between horses B1, C1, second and third horse from the horse A1’s group (A2, A3), second horse from horse B1’s group (B2). The horses that finish 1st and 2nd in the seventh race, are actually the 2nd and the 3rd fastest horses among all horses.

2. There are 3 mislabeled jars, with apple and oranges in the first and second jar respectively. The third jar contains a mixture of apples and oranges. You can pick as many fruits as required to precisely label each jar. Determine the minimum number of fruits to be picked up in the process of labeling the jars.

This is another tricky puzzle where you must really churn your brain. A noticeable aspect in this puzzles is the fact that there’s a circular misplacement, which implies if apple is wrongly labelled as Apple, Apple can’t be labelled as Orange, i.e., it has to be labeled as A+O. We are acquainted with the fact that everything is wrongly placed, which means A+O jar contains either Apple or Orange (but not both). The candidate picks one fruit from A+O, and let’s assume he gets an apple. He labels the jar as apple, however, jar labelled Apple can’t have A+O. Thus, the third jar left in the process should be labelled A+O. Basically, picking only one fruit helps in correctly labeling the jars.

3. There are 8 batteries, but only 4 of them work. You have to use them for a flashlight which needs only 2 working batteries. To guarantee that the flashlight is turned on, what is the minimum number of battery pairs you need to test?

To solve this problem, the first step involves naming the batteries, for instance, A, B, C, D, E, F, G, and H. In this problem, you can’t compare 2 items directly. If a combination of two batteries fail to turn the light on, it means either one or both the batteries aren’t working. The candidate has to approach the puzzle in a circular manner.

4. 10 coins are placed before you on a table, while you stay blindfolded. The candidate is permitted to touch the coins, however conditions to the puzzle dictates that he can’t really determine which way up they are by feel. 5 coins are placed heads up, while the other 5 are kept tails up, without the interviewee knowing which ones are which. If you’re allowed to flip the coins any number of times, how would you build two piles of coins each with the same number of heads up.

This is another common analytics puzzle revolving around coins. This problem can be solved by initially creating two piles of coin, with 5 randomly selected coins in each pile. Let’s assume the first pile looks like H, H, H, H, T and the other pile can be imagined as T, T, T, T, H. The final bit in solving the puzzle involves flipping all coins in the second pile to finally obtain same number of heads. This common coin puzzles tends to pose confusion in the candidates mind.

5. Two trains, separated by a distance of 80km, are running towards each other on the same track at a speed of 40kmph. A bird takes its flight from train X and flies towards train Y at a constant speed of 100kmph. Once it reaches train Y, it turns and start flying back toward strain X. The bird keeps flying to and forth till both the trains collide. Determine the distance travelled by the bird.

This is another common analytics-based puzzle where the candidate has to use his quick thinking and mathematical skills to find the answer. Ideally the problem should take a minute for solving. The problem can be solved mathematically in the following few steps:

Through this puzzle, the interviewer is testing your approach. Consider yourself rejected if the approach you took involves calculating distance from X to Y, and then Y to X, and so on.

6. A birthday cake has to be equally divided into 8 equal pieces in exactly 3 cuts. Determine the way to make this division possible.

This puzzle is not really difficult to solve if you really put your mind to work. The approach entails slicing the cake horizontally down the centre, followed by making another division vertically through the centre. The two divisions made across horizontal and vertical directions will give you 4 equal pieces of the cake.

In the final step, simply stack the 4 pieces one above the other, and then make the third division, splitting the stack into half. This gives you the 8 equal pieces of cake, along with answer to your puzzle.

7. You pull out 2 balls, one after another, from a bag which has 20 blue and 13 red balls in total. If the balls are of similar colour, then the balls are replaced with a blue ball, however, if the balls are of different colours, then a red ball is used to replace them. Once the balls are taken out of the bag, they are not placed back in the bag, and thus the number of balls keep reducing. Determine the colour of last ball left in the bag.

This puzzle usually seems like a tough one to answer, but solving it once makes one realize that the procedure was actually simple. If the candidate pulls out 2 red balls, he replaces them with a blue ball. On the other hand, if he draws one red and one blue, it is replaced with a red one. This implies that the red ball would always be in odd numbers, whether the candidate removes 2 together, or removes 1 while adding 1. This also indicates that the last ball to stay in the bag would be a red one. The interviewer is merely testing the approach the candidate applies in solving this common analytics puzzle.

This question can be rated of medium difficulty and shouldn’t ideally take more than 2 minutes to answer. The approach here is to initially fill the 5L jug with water and empty the same into the 4L jug. The 5L jug will be left with 1L of water, which is poured into the bucket. Meanwhile, empty the 4L jug.

The above step is repeated, so that the bucket now is filled with 2L of water. Finally, fill the 5L jug with water and empty the same into the bucket. The bucket will now have 7L of water, as you add % L directly to the previously collected 2L of water in the bucket.

9. There are 10 stacks of 10 coins each, where each coin weighs 10gms. However, one of the stacks is defective, and that stack contains coins which weigh 9gms. Determine the minimum number of weights needed to identify the defective stack.

This is another tricky puzzle, asked commonly during analytics-based interviews. To solve this problem, the trick lies in creating a weighted stack for measurement, which will enable the candidate to identify the defective stack in one measurement.

A coin is taken from the first stack, 2 from the second, 3 from the third, and so on. This will give a total of 55 coins in hand. If none of them are defective, they would weigh 550gms together. However, if stack 1 turns defective, the total weight would stand at 549gms; defect in stack 2 would result in a total weight of 548gms; and so on. Therefore, just one measurement can help the candidate identify the faulty stack.

10. There are 3 switches in a room, where one of them is assigned for a bulb in the next room. You can’t see whether the bulb is on or off, until you leave the room. Find the minimum number of times you have to go into the room to identify which switch corresponds to the bulb in the other room.

If the bulb is glowing, the second switch corresponds to the light bulb; however, if the bulb doesn’t glow, but touching it feels warm, the first switch is the one that turns the bulb on. If it’s neither lit, nor warm, then the third switch is the desired switch. So, a person must go only once to the other room to find out the accurate switch.