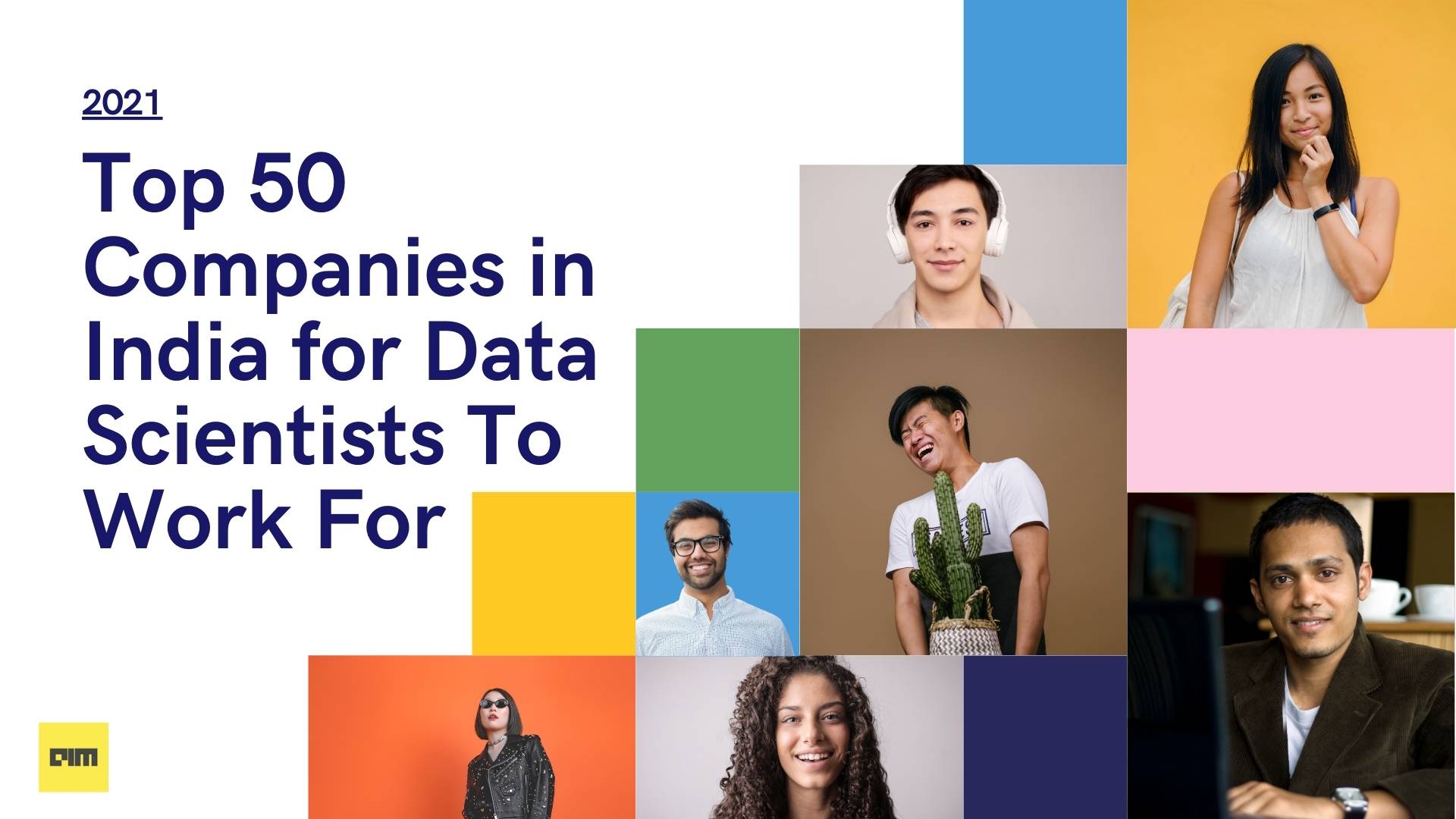 MLOps Vs Data Engineering: A Guide For The Perplexed

This report is the third annual list of the ‘Top 50 Firms in India for Data Scientists To Work For’ published by Analytics India Magazine (AIM). This report aims to rank firms based on how well suited a company’s policies are for their employees. For 2021, AIM has expanded the scope by including a wider set of firms. We surveyed hundreds of employers in India to glean their insights on how they have created an exemplary work environment for data scientists.

We listed five parameters to compute the ranking of these firms — Learning & Support, Productivity & Engagement, Benefits & Well-being, Rewarding Excellence and Diversity & Inclusion. To determine this year’s rankings of AIM’s best companies for data scientists to work for, we derived an overall index. This index was calculated using the average score of five sub-indices (based on the aforementioned parameters). The sub-indices themselves were calculated based on the answers’ scores (of the survey questions) asked by AIM.

Below we discuss the results of the analysis and present the top-ranking companies across the different sub-indices and the overall index. We highlight the various policies or initiatives that these companies undertook, for which they were listed in the top 50.

Lowe’s India scored the highest overall index at 0.55 to register itself as the best firm for data scientists to work for in 2021. Lowe’s had the highest ranking in the Diversity & Inclusion sub-index because of the increased representation of women in their firm and the various initiatives undertaken to ensure that. Wipro stood second with an overall index of 0.54. The firm scored the highest at the Learning & Support sub-index.

The Learning & Support sub-index score was assigned to firms on the basis of the mandatory hours of training, infrastructure for data scientists, external engagements, learning platforms, and mentorship programs.

Wipro scored the highest in the Learning and Support sub-index at 0.69 mainly because of the mandatory training hours and mentorship programs. Wipro’s data science consultants spend the highest number of hours training. Lowe’s India stood second, with a 0.65 score. It had the highest participation in external hackathons and conferences.

eClerx scored 0.55 to stand third. The company provides a wide array of infrastructure for its data scientists. Ugam stood 4th with a score of 0.54 because of the firm’s platforms and mentorship programs. Finally, EY Global Delivery Services LLP scored 0.53 to stand 5th.

The Productivity & Engagement sub-index for a firm was scored based on the companies’ attrition rate, the average tenure of data scientists, growth in the data science team, absenteeism, 90-day failure rate, and the percentage of internal referrals.

World Wide Technology ranked the highest in the Productivity Engagement sub-index, scoring 0.79 in total. It had the lowest attrition rates last year and the third-highest growth in its data science teams. HDFC Ltd came second with a score of 0.67. The firm performed very well in terms of the data scientists’ average tenure.

Subex ranked third with 0.66 points. The firm recorded the highest growth in its data science team. Pegasystems Worldwide ranked fourth with a score of 0.66. It was the best performer for the internal employee referrals score. Welspun India Limited also saw the highest growth rate in the firm’s data science unit standing 5th with a rating of 0.65.

Companies were scored for the Benefits & Wellbeing sub-index based on three parameters – health insurance, number of paid leaves, and flexi-benefits.

AB-InBev topped the Benefits & Wellbeing sub-index with a score of 0.84 since it provides its employees with the third-highest number of paid leaves. Fractal Analytics ranks second with a score of 0.81. Fractal ranked the highest for its flexi-benefits.

HDFC Ltd ranked third with a score of 0.73. The company provides the highest number of paid leaves to its employees. HDFC Bank Ltd provides the second-highest annual paid leaves for its employees to stand fourth in with 0.72 points. TheMathCompany ranked fifth in this sub-index, scoring 0.69.

The Rewarding Excellence sub-index was scored on the basis of the average median hike, employee feedback frameworks, and team building activities.

The Diversity & Inclusion considered parameters including female-to-male ratio, percentage of women in senior positions, and the various diversity-related initiatives that the firm undertook last year.

Lowe’s India topped the Diversity & Inclusion index with a score of 0.59.  The company has the highest female-to-male ratio and undertook multiple diversity-related initiatives. EY Global Delivery Services LLP scored 0.49 in the Diversity & Inclusion sub-index to stand second in the category. EY had the highest percentage of women in leadership roles.

Wipro Limited stood third with a score of 0.40, ranking highest for the various diversity-related initiatives. Aditya Birla GDNA Cell had the third-highest female-to-male ratio, to stand fourth in the Diversity & Inclusion sub-index with a score of 0.39. Fifth in the sub-index stood Fractal Analytics with a score of 0.39. The firm has started a ‘Gender kicker’ for pay parity where all women employees were given an additional compensation kicker in the FY21 increment cycle.

This report highlighted top data science companies that have made a significant effort to keep their employees happy and helped create an environment that is conducive to the employees’ career growth and overall well-being. All the companies in the top 50 made a considerable effort. Some did better than others.

It is important to note that there is no single solution to all the problems that employees face or a single answer to what could make a data science company the best place to work at. But there are certain measures that firms can take that can make things as easy for the employees as possible.

More than the rankings, the aim of the ‘Best Data Science Companies To Work For’ report was to highlight some of these measures or initiatives taken by different enterprises/data science companies so that other firms could take inspiration from them and implement similar strategies customised to their own firms.

The nominations for 2022 are now open. To nominate your organization, please fill in the details here.

If your organization is looking for data science staffing services or employer branding, reach out to us at [email protected]

MLOps Vs Data Engineering: A Guide For The Perplexed