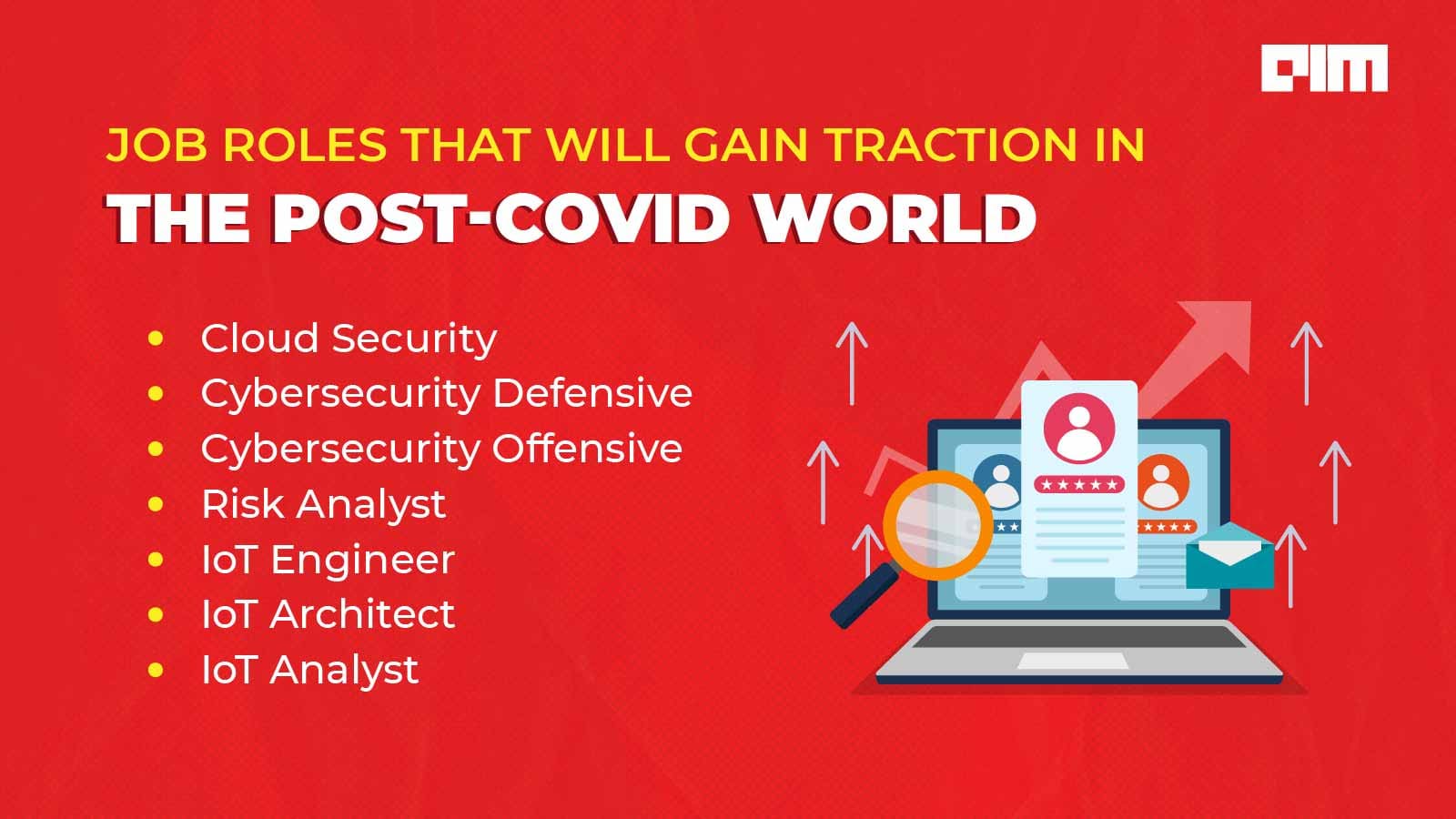 COVID is indeed changing the economic landscape with its disruptive nature, but has the impact been entirely negative? While pandemic has been massively impacting businesses across industries, creating an economic recession of all time, some exciting job roles with advanced skill sets have emerged out of this crisis. Not only these job roles are opening up opportunities for businesses and professionals around the world but are also predicted to gain massive traction in the post-COVID world.

In fact, a study done by Analytics India Magazine in collaboration with Jigsaw Academy has revealed seven such job roles that are going to be unaffected by the market and economic disruptions. According to the study, these job roles have been identified and listed based on their rising demand across all industries, changing environment due to apparent reasons, and the dramatic shift to digital and on-cloud services.

At the beginning of the year, several studies had highlighted artificial intelligence, data science and analytics to be the preferred domains for the rising demand, however with the lockdown in place, following job roles are considered to be in-demand and relevant to the current environment. Here is the list:

Also Read: Are Jobs In Analytics Looking Up?

With the lockdown in place, more businesses are shifting their interest towards digitisation and on-cloud services, which led to a massive rise in cyber-attacks, including hacking, identity theft, phishing attacks as well as malware. This has brought in the requirement for more professionals in the cloud security and cybersecurity domain.

A lot of this could be attributed to the changing dynamics of the business operations and customer transactions amid this uncertain time. While the demand for cloud security over the next five years is expected to rise by 13%, the cybersecurity defensive role to secure networks is also projected to rise at a rate of 11.8%.

Thirdly comes the cybersecurity offensive job role, which hires professionals to track malicious IP addresses and omit their services and servers that can produce illegal activities. This is also gaining significant reputation with a growth of 10.3% annually. Following that comes the risk analyst job role, which not only helps in managing the security angle of the company but also assists in handling the risk of end-to-end operations, data science — which will rise at 10.1%.

With more companies shifting their critical business data to the cloud, the role of cloud security will be of primary importance. A cloud security professional will focus on providing enhanced security for the organisation’s cloud-based platforms and plays a critical role in protecting their data.

With the increasing number of digital and online transactions being carried out during lockdown, it became critical for organisations to secure their networks, and that’s where the cybersecurity defensive job role has emerged. This job role is second in preference following cloud security.

While cybersecurity defensive uses a reactive approach, in cybersecurity offensive job roles, professionals proactively deploy security measures to identify malicious activities and respond to these servers and attackers by shutting down their operations.

A risk analyst, on the other hand, is a professional that analyses the overall security strategy of the company. Not only it assesses the security strategy already in place, but also advances the disaster recovery plans but also predicts the adverse events of the future.

Also Read: How To Avoid Cyberattacks While Working From Home

Although there has been a slight contraction of jobs in the IoT sector, it is expected to gain traction in the post-COVID world, with more applications in machinery, plants, industrial devices, hi-tech engineering, and logistics services. Consequently, with more and more machine-to-machine communication happening in businesses, it becomes critical for them to real-time analyse the data generated. And that’s where the role of IoT analytics will also gain traction.

As the industry develops, going forwards, IoT is predicted to have significant job opportunities with higher experience and salary levels. According to the study, following the risk analyst, the role of IoT engineer, IoT architect, and IoT analysts will grow at a rate of 9.6%, 9.6%, and 8.1% respectively.

Also Read: How AI Can Transform Recruiting In A Post-Recession World

The role of IoT engineer, also known as IoT developers, involves developing IoT-based platforms and software and designing efficient systems that can integrate a massive amount of data generated. Not only do they develop and manage IoT devices but also assist in developing standards for production and designing. The role involves addressing several areas, including security, networking, engineering, cloud computing, as well as hardware designing.

As the name suggests, an IoT architect takes the massive amount of data generated and makes a blueprint for leveraging the same for solving business problems. Their primary role is to transform an idea into functional code. Starting from inception of the concept to deployment of the solution, an IoT architect is always involved.

Lastly, similar to a data analyst, an IoT analyst also analyses the massive amount of data generated from IoT devices and identifies trends and patterns that can be utilised to make better-informed business decisions. With their strong critical thinking approach and analytical skills to interpret data, IoT analysts can bring meaningful discussions to the table.