PARAM Siddhi-AI is a high-performance computing-artificial intelligence (HPC-AI) and by far the fastest supercomputer developed in India. 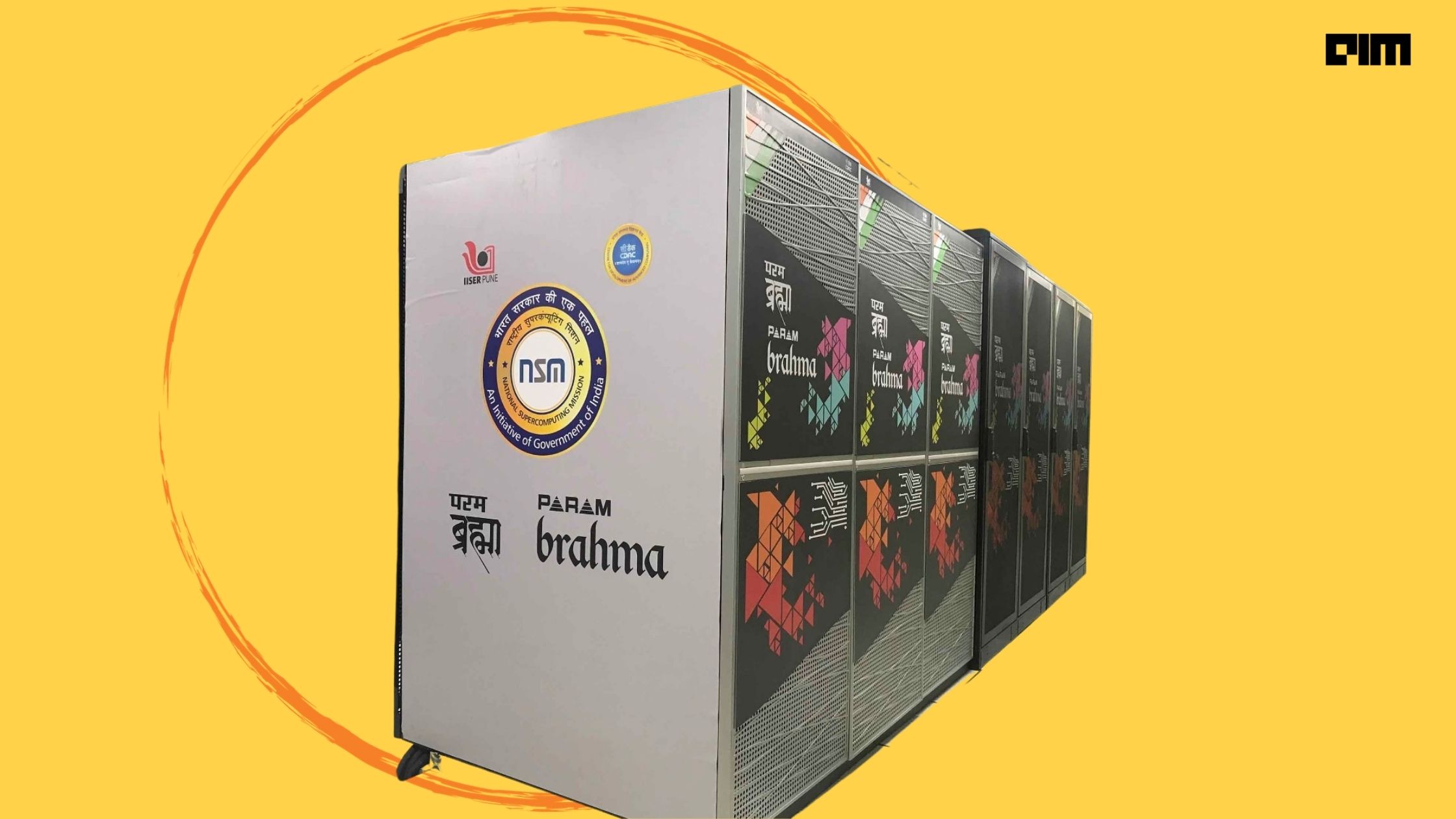 Supercomputing in India began in 1980 when the Indian government set up an indigenous development programme as there were several issues to procure supercomputers from abroad. The National Aerospace Laboratories started the project “Flosolver MK1“, a parallel processing system operating in December 1986. Following this, multiple projects were commissioned from different organisations, including C-DAC, C-DOT, NAL, BARC, and ANURAG. C-DOT created “CHIPPS”, the C-DOT High-Performance Parallel Processing System, and BARC created the Anupam series of supercomputers. ANURAG created the PACE series of supercomputers.

Although the C-DAC mission released the “PARAM” series of the supercomputer, it was only in 2015 that the launch of the National Super Computing Mission boosted the Indian supercomputers. NSM announced a seven-year programme worth Rs 4,500 crore to install 73 indigenous supercomputers by 2022. As of November 2020, PARAM Siddhi-AI is the fastest supercomputer in India and 63rd in the TOP500 list.

In November 1987, the Centre for Development of Advanced Computing (C-DAC) was allotted a three-year budget of Rs 375 million to create 1000Mflops (1Gflops) supercomputers. The “PARAM” (short form for Parallel Machine) series of supercomputers was unveiled in three C-DAC missions.

The PARAM 8000 was the first machine built from scratch; this 64-node machine was unveiled in August 1991. Each node used Inmos T800/T805 transputers; this 256-node machine had a theoretical performance of 1Gflops; however, in practice, it has just around 100-200Mflops.

PARAM 8000 was created on a distributed memory MIMD architecture with a reconfigurable interconnection network.

The PARAM 9000 was first demonstrated in 1994, designed to merge cluster processing and massively parallel processing computing workloads. This system used 32–40 processors and scaled up to 200 CPUs by using the Clos network topology. The PARAM 9000/SS was the SuperSPARC II processor variant; the PARAM 9000/US used the UltraSPARC processor, and the PARAM 9000/AA used the DEC Alpha.

The PARAM 10000 was unveiled in 1998. This supercomputer had independent nodes, each based on the Sun Enterprise 250 server; each server contained two 400 Mhz UltraSPARC II processors. The maximum speed of this system was 6.4 Gflops. This would contain 160 CPUs and be capable of 100 Gflops, easily scalable to the Tflop range.

PARAM Padma was introduced in December 2002. The first Indian supercomputer to enter the Top500 list of supercomputers in the world, it ranked 171 in June 2003. PARAM Padma had a peak speed of 1024 Gflops (about 1 Tflops). The machine used IBM POWER4 processors.

PARAM Yuva was unveiled in November 2008 and was ranked 69 in the Top500 list of supercomputers in the world. This supercomputer has a maximum sustainable speed (Rmax) of 38.1 Tflops and a maximum speed (Rpeak) of 54 Tflops. It had a storage capacity of 25 TB up to 200 TB and used PARAMNet-3 as its primary interconnect.

PARAM Yuva II was unveiled in February 2013. It was created in three months at the cost of ₹160 million. It performed at the peak of 524 Tflops, about ten times faster than the present facility, and will consume 35 per cent less energy than the existing facility. According to CDAC, the supercomputer can deliver a sustained performance of 360.8 Tflops on the community standard LINPACK benchmark. This Indian supercomputer was to achieve more than 500 Teraflops.

PARAM-ISHAN was unveiled in September 2016 as a 250 Teraflops capacity hybrid HPC at IIT Guwahati. It has 162 compute nodes with 300TB of storage based on a lustre parallel file system.

This supercomputer had a computational power of 850 Teraflops with 1 PetaByte storage capacity. It was built in India under the National Supercomputing Mission, co-funded by the Ministry of Electronics and Information Technology and the Department of Science and Technology, where C-DAC and IISc steered this mission. ‘PARAM Brahma‘ is supported by a unique cooling system called direct contact liquid available in India. This cooling system effectively uses the thermal conductivity of liquids, namely water, in maintaining the system’s temperature during operations. As of 2020, this supercomputer is available at IISER Pune.

PARAM Siddhi-AI is a high-performance computing-artificial intelligence (HPC-AI) and by far the fastest supercomputer developed in India with an Rpeak of 5.267 Pflops and 4.6 Pflops Rmax (Sustained). The AI helps research in advanced materials, computational chemistry and astrophysics, health care system, flood forecasting and Covid-19 application through faster simulations, medical imaging and genome sequencing. In November 2020, PARAM Siddhi-AI ranked 63 among the most powerful supercomputers in the world. This supercomputer is built on the NVIDIA DGX SuperPOD reference architecture networking and C-DAC’s indigenously developed HPC-AI engine, software frameworks and cloud platform.

Supercomputers under the National Supercomputing Mission

PARAM Sanganak was set up at IIT Kanpur under the build approach under the NSM with a peak computing power of 1.3 Petaflops.

PARAM Pravega is a supercomputer installed under NSM at the Indian Institute of Science in January 2022. It runs on CentOS 7.x, has 4 petabytes of storage and a peak computing power of 3.3 Petaflops. Param Pravega is a part of the High-Performance Computing class of systems, is a mix of heterogeneous nodes, with Intel Xeon Cascade Lake processors for the CPU nodes and NVIDIA Tesla V100 cards on the GPU nodes. This machine hosts an array of program development tools, utilities, and libraries for developing and executing High-Performance Computing (HPC) applications.

The IISC Bengaluru already has a cutting-edge supercomputing facility established several years ago. In 2015, the Institute procured and installed SahasraT, which was the fastest supercomputer in the country.