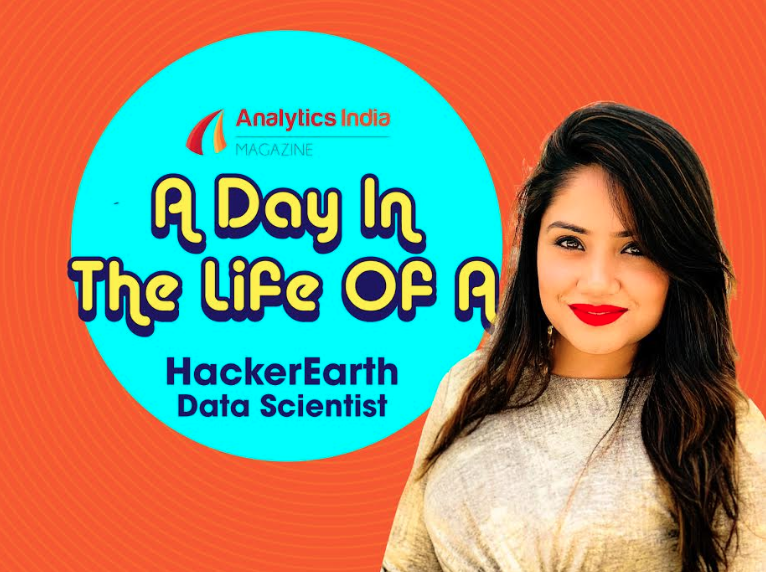 In our column ‘A Day In The Life Of’, we are trying to step into the shoes of the awesome techies from various organisations who are working in Emerging Tech areas like big data, data analytics, artificial intelligence and the internet of things, among others.

This week Analytics India Magazine decided to talk to Mitali Sodhi, a Senior Data Scientist at HackerEarth, about her ambitions in the company, and how she wants to be a leader in the emerging tech community.

Sodhi begins her day early in the morning with a brisk run, to keep the creative juices flowing and then begins her work with a positive attitude, which is very important to her. Balancing her work and personal life meticulously, Sodhi plans her days to accommodate both.

“During weekdays, most of my time is spent in the office or office-related work. I usually push my family time during the weekends. This includes catching up with my family and friends or finishing up some household work,” she says.

Describing her social life as a combination of “active and boring”, Sodhi says, “There are certain weekends when I get to spend time with friends or attend parties or go shopping. But there are also weekends when I just unwind at home and spend the entire time reading books.”

When asked about her work, Sodhi says that her work at HackerEarth comprises of building machine learning-based features for the company’s flagship products, Recruit and Sprint. “I also manage the Data Science team and take care of the hiring of new talent,” she adds. She is currently working on optimising the process for Content Generation and Content Discover for Recruit.

When asked about what is the favourite part of her work day, Sodhi says, “I have the most fun when I am developing solutions, coding and finalising the architecture for the projects that I am working on.” But when asked about the most boring and tiring part of her workday, she unsurprisingly says, “Being stuck in Bangalore traffic.”

Many Data Scientists after a while feel like they’ve been trapped in a rote routine. But Sodhi makes sure that it doesn’t happen to her. At her current place of employment Sodhi believes that through careful sprint and roadmap planning, she is making sure that her talents and strengths are put to best use in the company.

However, she feels like she has more to offer her company. “With time, I would like to put my leadership skills to action in order to build an excellent data science division in HackerEarth which will strengthen the company’s product offerings,” Sodhi says confidently.

When asked about her plans for the future, she says, “My five-year plan is to move into a strategic and decision making role as part of HackerEarth’s leadership team. My short-term goal is to build a strong data science team here.”

How Machine Learning Models Can Help In Getting A Better Harvest

Here’s How OPSEC Can Help Protect Your Data From Hackers

A Day In The Life Of: A Self-Taught Data Analyst Who Now Builds Machine Learning Models

A Day In The Life Of: A 17-Year Old Student Entrepreneur Who Built JARVIS Inspired Personal Assistant

A Day In The Life Of: A Machine Learning Engineer Who Wants To Keep The Planet Clean & Green