A data science candidate should have a solid background in statistics, optimisation, mathematics and coding. 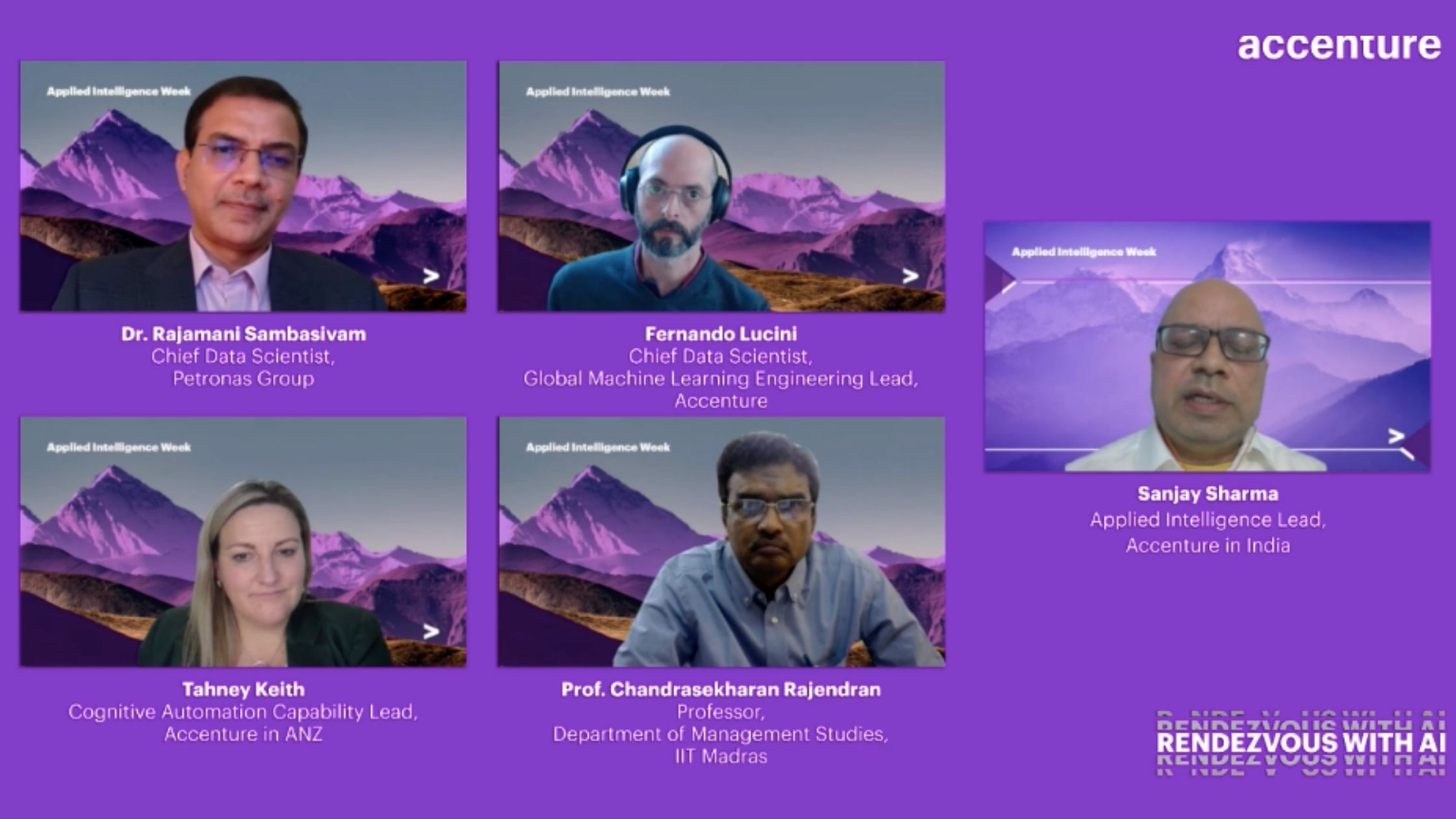 At the Applied Intelligence Week held last month, Accenture leaders and renowned data scientists threw light on the possibilities and opportunities in artificial intelligence and data science for a better tomorrow.

“If you look at the next five years, AI is coming up in a big way across multiple industries. An ideal candidate should know the algorithms, mathematics, code and technical skills. Surely, these are a must. But, in addition to this, candidates should work on their problem-solving skills, develop innovative solutions, and out-of-the-box thinking,” said Sambasivam.

Accenture’s chief data scientist Lucini said an ideal candidate must have a great balance between mathematics and the principles behind the tools.

Rajendran, professor at IIT Madras, said if a candidate has solid knowledge in their domain, data science can be a great value add.

Besides this, Rajendran also made a case f0r a candidate’s ability to articulate a business problem better, alongside continually updating their knowledge and differentiating themselves by participating in international level competitions and hackathons. “This should be the benchmark to know where you stand vis-a-vis best in the field, or in the world,” he added.

Further, Rajendran said a candidate should have a solid background in statistics, optimisation (both discrete and continuous optimisation), mathematics (linear algebra), and coding.

“Being good in AI, machine learning and developing statistical models is one thing, but being able to understand complex business problems is another. Merging these two is where it matters the most. That is a whole different side of the coin,” said Keith, cognitive automaton capability lead at Accenture.

According to Keith, the ideal data scientist should be able to translate real-world problems into data science problems they can solve. They should also be able to convert the output of data solutions and communicate this back as insights or actions in a way that is consumable to the business and non-data scientists, he added.

Overall, the industry leaders are looking at attributes, core skills, domain expertise, candidates’ ability to learn and scale. Companies are not looking at hiring data scientists based on one skill (be it coding, mathematics, or statistics), but a combination of different skills.

Sambasivam believes AI in manufacturing is a slightly different ball game. Since manufacturing has been there for more than a century now, there are many subject matter experts in the field (be it physics, thermodynamics, fluid mechanics, etc.). “Therefore, when a data scientist gets into applying AI into the manufacturing, the first and foremost requirement is the explainability of the results and parameters,” added Sambasivam.

He said data scientists need to work on the explainability part, keeping safety concerns in mind.

Today, most manufacturers have incorporated level 2 automation into their processes. The ability to control the process becomes very narrow, and when AI is introduced to improve it further, the accuracy is significantly higher. “Sometimes, the features that we want to build from the data may have to be non-linear in nature. So we have to work on that, and understand the process,” said Sambasivam.

“Understanding physics, chemistry, thermodynamics, and process dynamics are some of the key requirements for any data scientist who wants to work in manufacturing,” he added.

“Data science  is industry-specific. It is a profession, and not a skill,” said Lucini.

Lucini believes that enough data scientists are pushing the industry today, and enough scientists are coming out of great universities in India and elsewhere.

“Data scientists working anywhere need to have a similar set of skills in terms of rigour, correctness, breadth, depth of theory, practice and domain knowledge. Since you are working with different people from around the world, you are getting exposure to different skill sets, strengths and weaknesses,” said Keith.

Keith said data scientists learn on the job and are supported by peers and seniors. “Mentoring is just a really big part of how we develop our data scientists as well. It is really exciting to have had the opportunity with an extension to move around and leverage skill sets,” she added.

Addressing the supply side

In 2003, the government of India started the National Programme on Technology Enhanced Learning, NPTEL, in collaboration with premier institutions like IIT and IISc. NPTEL is an online curriculum development programme in science and engineering at university and research levels.

“Many students have joined these courses free of cost throughout the country. In total, 1,000+ courses have been offered by different institutions in the country, and more than 4000 colleges are the beneficiaries of this programme,” said Rajendran.

He further said the students get to see the applications of data science early on and would be able to apply to the parent discipline.