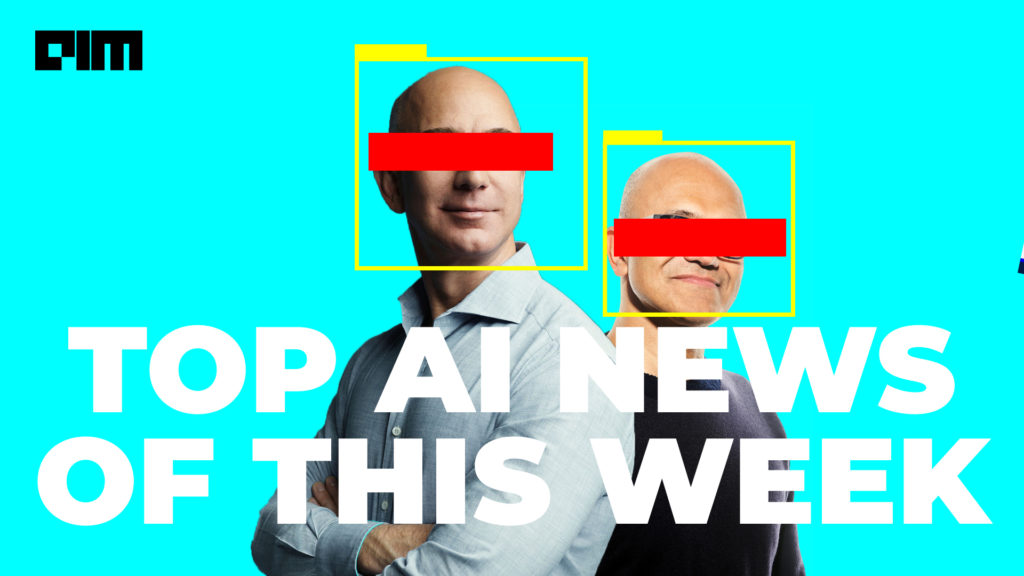 This has been quite an eventful week for the tech giants as they took a stance against the ongoing events in the US and have made efforts to bring in new regulations for the use of facial recognition technology. Apart from this, there are other hits and misses of AI. Let’s take a look at all the top AI news of the week:

It all started with IBM CEO Arvind Krishna when he announced the company was getting out of the facial recognition business and called for reforms to advance racial justice and combat systemic racism.

“IBM firmly opposes and will not condone uses of any technology, including facial recognition technology offered by other vendors, for mass surveillance, racial profiling, violations of basic human rights and freedoms,” Krishna wrote in the letter delivered to the members of Congress late Monday.

IBM’s withdrawal was followed by Amazon’s announcement of implementing a one-year moratorium on police use of its technology Rekognition. “We’ve advocated that governments should put in place stronger regulations to govern the ethical use of facial recognition technology,” wrote Amazon in their press release.

The backlash against the use of facial recognition technology has been around for a while, and few places in the US even passed laws to restrict the use of facial recognition. However, the ongoing events in the US forced tech companies to take a stance. By holding back on their own technology, the companies believe that it would buy enough time for Congress to pass new laws.

The efforts of OpenAI have started to come to fruition as it has announced that the public can access its innovations with new API, which has been launched this week.

OpenAI stated that the users can now apply its API to any language task — semantic search, summarization, sentiment analysis, content generation, translation, and more — with only a few examples. The company stated that they will be offering free access to the API for the next two months of their private beta.

Along with this beta API, OpenAI is also starting an academic access program to let researchers build and experiment with the API with free access.

Wipro And IBM Collaborate To Accelerate Cloud Journey In Bengaluru

Wipro and IBM announced this week that their Novus Lounge, located at Wipro’s Kodathi campus in Bengaluru will be offering a comprehensive suite of solutions leveraging Cloud, AI, machine learning and IoT to help developers and start-ups. Customers can now access to IBM and Red Hat solutions remotely to scale their technology. Additionally, Wipro will leverage IBM Cloud offerings alongside its own technology to develop solutions for clients in Banking and Financial Services, Energy and Utilities, Retail, Manufacturing and Healthcare space.

Last week, Microsoft’s News service MSN laid-off contract-based news curators and replaced them with AI, sparking a debate on the fate of jobs in the face of automation. However, the decision of using AI backfired when one of the AI curated articles misrepresented an interviewee. As appeared first on The Guardian, it was reported that the early use of AI news reporter resulted in a story about the singer Jade Thirlwall’s personal reflections on racism being illustrated with a picture of her fellow band member Leigh-Anne Pinnock.

“@MSN If you’re going to copy and paste articles from other accurate media outlets, you might want to make sure you’re using an image of the correct mixed-race member of the group,” wrote Thirlwall on social media.

The AI curator even reported its own misfiring, setting a new precedent for self-criticism in the news circles. Adding to the irony, the article, however, was removed from the feed manually!

Launched last year in December, the DeepFake detection competition drew more than 2,000 participants who submitted more than 35,000 models. Facebook has now shared the results of its competition. The top-performing model achieved 82.56 percent average precision on a public dataset. Whereas, on a blackbox dataset, the ranking of top-performing models changed significantly. The highest-performing entrant model achieved an average precision of 65.18 percent against the black box data set.

The objective of this challenge was to increase the awareness of the impacts of fake imagery and to encourage the developers to create tools that can help prevent people from being deceived by the images and videos they see online.

Flipkart has rolled out a new AI-powered voice assistant feature called Supermart to make it easier for consumers to shop. Now customers can explore deals and offers, filter results, add multiple items to carts, receive contextual suggestions and check out using conversational voice commands. This new feature has already been rolled out for Android users. Supermart supports Hindi and English and is expected to support more Indian languages in future.