When we approach something that we don’t fully understand, it is better to be safe than sorry! In that spirit, a “safety net” . . .

So, what are we scared of when it comes to Artificial Intelligence? We do not truly know what Intelligence is; we do not know how it will evolve –will our so-called “intelligent designs” lead us to catastrophic unintended consequences? This is what we are afraid of in 2017 . . .

A good way to proceed – the best way I have found –is to borrow Daniel Dunnett’s formulation of how intelligent design emerged. The reference here is to his new book, “From Bacteria to Bach and Back: The Evolution of Minds”. Dunnett is the preeminent philosopher-scientist of our time. The book is dense but here is a terse summary.

There are different timescales for each of these two evolutions – first, the biological evolution, then the cultural evolution got layered on in some species, language developed in humans and lateralized the brain (unique to humans which gave more room for specialization); Comprehension arose during this time and it enables humans to execute “intelligent design” (how Comprehension arose in a second . . .). There . . . the whole history of the Earth! 😊

One factor that is common to life from bacteria to Bach is Competence. Even an amoeba has enough competence to get energy, reproduce, move about in its environment. All living forms display “Competence without Comprehension”. This is how I define Machine Learning also . . .

We don’t have to comprehend the competencies that allow us to function – digesting a meal or grasping a doorknob; a calculator can do addition without comprehending Arithmetic. How did Comprehension come about in humans? This is intricately related to language development, memes, and cultural evolution. Just like natural selection in biological evolution, memes and “bottom-up” purposeless cultural variations yielded some golden nuggets during cultural evolution – such as the ability to describe things that are not in front of us; language allowed humans to transcend time and space and opened up the window for myth-making, religion, exploring the mind-scape, etc.

(While not directly relevant to our AI topic, Dunnett proposes “consciousness” as a personal summary digest of the goings-on in our brain; it is so vast that we need a “User Interface” to interact with it effectively . . . much like a desktop and icons help us interact with the complicated computer internals).

The language also enables us to turn our attention to our own thoughts and develop them deliberately in the kind of top-down creativity characteristic of science, art, technology, and institutional design – what we sometimes call “intelligence”. Such intelligent design is the hallmark of Comprehension.

Intelligence is a loaded word but here we consider it as “Comprehension”. As Dunnett argues, the rise of Comprehension requires cultural evolution by memes that mutate, spread and reproduce purposelessly; I would add that this meme activity also modified the “wet-ware” so that Comprehension was accelerated by lateralization and specialization of brain regions. Can ALL this be wrought in software and silicon?

Now that humans have evolved the capacity for “intelligent design”, most of the evolutionary steps in Comprehension can be short-circuited. However, at least today, Internet memes do not have the ability to influence software directly – much less affect the underlying electronics! However, bots that communicate directly, learn and modify themselves and neuromorphic computing hardware elements such as memistors that can be modified by software take us to the edge of a slippery slope.

If these bots acquire the ability, just like humans did, to perform “intelligent design”, anything is possible! If their designs are not under human control, the safety net I mentioned at the outset may have to become operational.

I believe that we are far from such a juncture. I remember a hallway conversation I had with Dunnett almost 30 years ago; he said to me, “Such an Artificial Intelligence will be as large in size as the solar system and consume the energy produced by many Suns!”.

Today’s “deep learning” experts will claim that the Deep Neural Network does all the things that are described in the last few paragraphs! Cat pictures are the memes, they spread in the neural network and weight adaptation is the analog of wet-ware modification . . . but then, there is no Comprehension! Remember, the hallmark of Comprehension is intelligent design (sorry, “generalization” does not count as intelligent design!). Startups with neuromorphic chips (which mimic the human connectome) also do not go beyond Competence – that is “Machine Learning” (which is amazingly useful but it is just not “intelligence”!).

Software bots that communicate in a specific domain, learn and modify themselves.

It is possible that the underlying hardware is (memistor-type) analog rather than digital.

General-purpose “intelligence” solution may not be practical – may need the energy of a few Suns, etc.

I expect the solutions created by these “AC” bots to be superior to the so-called “AI” solutions of 2017. 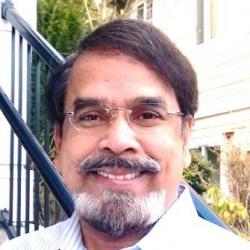 Dr. PG Madhavan is the Founder of Syzen Analytics, Inc. He developed his expertise in Analytics as an EECS Professor, Computational Neuroscience researcher, Bell Labs MTS, Microsoft Architect and startup CEO. PG has been involved in four startups with two as Founder. PG has 12 issued US patents and over 100 publications & platform presentations to Sales, Marketing, Product, Industry Standards and Research groups.

Data Science Provides Huge Job Opportunities. Here’s How You Can Capture Them