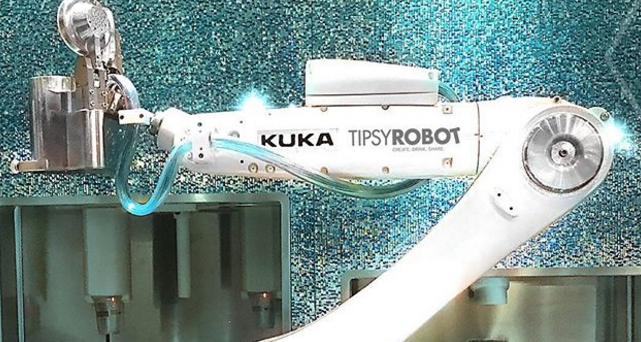 India Is Winning The Global AI Race. Here’s how. He may not flirt, he may not have trademark moves that define a seasoned bartender, but the AI-powered robot bartender can whisk a mean drink. These swanky robots have made their way to a swanky bar at the Las Vegas Strip, U.S., and are pouring drinks out, oblivious of the curious, interested glances of the patrons.

The restaurant titled Tipsy Robot has been generating a lot of curiosity for its neo-chic interiors and of course, the swanky robot bartenders.

Rino Armeni, owner of the Tipsy Robot, says that his bartenders will not replace humans. “No, no, no. It’s entertainment — like the Bellagio fountains,” he told a daily.

While the robots may be efficient with pouring, mixing drinks, even coming up with newer, tastier versions of cocktails, they lack the human touch, said the customers.

Many believe that the robotic bartenders are an indication that the artificial intelligence is penetrating the food and beverages industry. To err is human, and therefore these robot bartenders who don’t go out for lunches, smoking breaks and even vacations, have inspired the business owners already.

A handful of other establishments in the U.S. have embraced intelligent automation, if not AI and robotics directly. Venues such as LI Pour House Bar and Grill in Long Island have embraced automation by allowing customers to pull their own pints and pay via a computer terminal.

Anthony Pallino the owner of the establishment said that there was a need to economise when the minimum wage in the U.S. was rising. “If you needed five or six servers on a normal night, now you need four. Every year, thousands of dollars will be saved with each electronic server,” he said.

Already, reports suggest that 77 percent of millennials living in U.K./U.S. would want to use AI to obtain better assistance in planning and cooking healthy meals.

India Is Winning The Global AI Race. Here’s how.