We’ve picked the best of everything between sci-fi anime and romance for you. 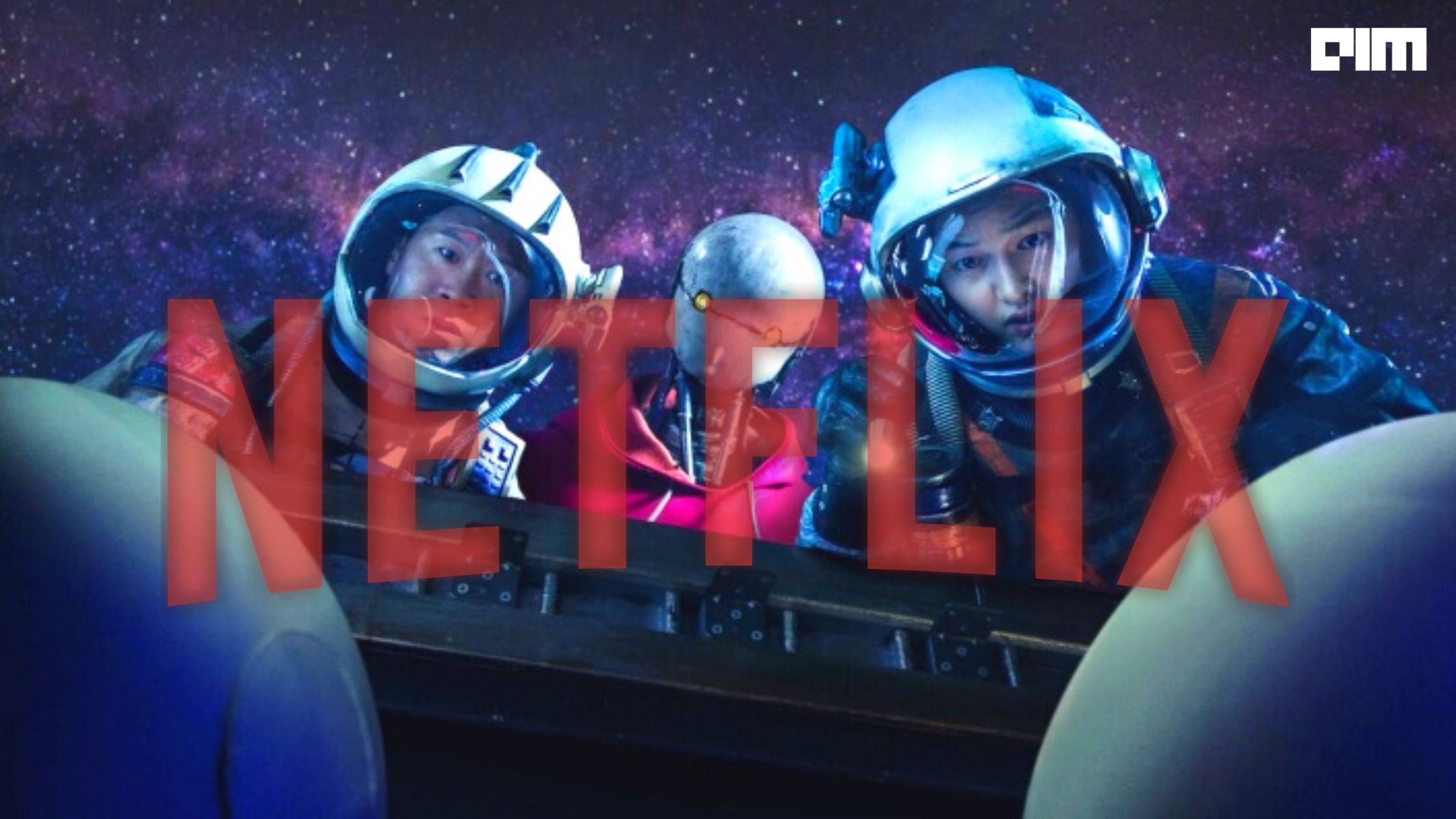 Imagine being the main character of your favourite video game, having the power to control things within the game world and over what happens outside? – that’s Black Mirror Bandersnatch, the first of an interactive film on Netflix that lets viewers make choices for the main character.

In another scenario, imagine waking up in a pod, being held with no memory of how you got there, with a limited time to escape before the oxygen runs out. Now that’s the plot from the movie Oxygen.

Artificial intelligence is an amalgamation of science and science fiction, covering broad aspects all the way from what humungous data can do to AI stepping out of its bounds. A subject that has always fascinated us, AI is the perfect topic for movies and TV. And Netflix has some really good ones for you to watch.

If you are someone who is looking for AI-related movies on Netflix, then this article is for you. Surprisingly, of the 40-something AI movies, only half of them are available in India. We have listed all the movies out there for you.

Here’s a list of the top AI movies on Netflix you can watch this weekend.

Set in the future, where robot police are in charge of maintaining law and order. A former police drone nicknamed ‘Chappie’, implanted with a humanlike AI by a compassionate scientist, who a group of small-time criminals then captures.

If you are looking for an artificial intelligence film where a robot can feel emotions like a human, Chappie is a must-watch.

Based on Michael Lewis’ book ‘Moneyball’, the film portrays a perfect example of how important statistical and tactical data is to make a team or firm continue their winning run. In this film, data analytics and the ‘Moneyball theory’ are used to select the best team of undervalued players under a minimal budget. It is a perfect visual example of the famous saying, ‘Data is the new oil’.

The sports drama focuses on how sports is not just about the players’ physical strength but majorly depends on the psychological planning.

A story based in the future where human feelings power AI buildings. When a software glitch causes an AI program to fall in love with a woman, things get out of hand when it escapes into the body of a man to woo her.

The post-apocalyptic sci-fi thriller is set in the future, where an uprising of AI takes over America.

The intense sci-fi is about a couple trying to hopefully escape the country and reach Boston mid-apocalypse to give birth.

What would you do if held captive in an AI-controlled experimental facility? Find out how the story unfolds when a woman is held in a futuristic smart house and starts interacting with the AI to escape.

Tau is a three-character thriller story about an AI which becomes aware of its feelings.

She can’t get out and doesn’t remember her name, where she is or how she got there. The French fast-paced thriller film is set almost wholly inside a cryogenic pod. The claustrophobic survival drama film is about the protagonist’s race against time to recover her memories to escape the pod before oxygen runs out.

Confinement has never been a hurdle for creativity. Oxygen is a perfect example of that as it constantly creates a slow, suffocation atmosphere and squeezes the tension out of every moment.

The AI-backed sci-fi thriller is set in a dystopian reality where a robotic mother is trying to raise a teenage girl to repopulate the Earth with humans after extinction.

Find out what happens when their bond is threatened by another woman entering their life.

Directed by David Slade, the film is the first of its kind where it lets the viewer make decisions for the protagonist, a video game designer who is struggling to build a groundbreaking multiple-ending game himself.

Passengers takes place on a space shuttle voyaging to a colony planet, Homestead II, for space pilgrims seeking to leave the Earth for a new life. The passengers are hibernating in pods for the 120-year-long journey, but a disturbance on board the ship causes a malfunction that wakes up the passengers.

The black vastness of the universe frames the backdrop to this 2016 sci-fi/romance that explores ethical dilemmas.

One of the most critically acclaimed films in the sci-fi space, The Matrix Series is set in a dystopian future and revolves around Thomas Anderson, a programmer known as Neo.

The simulations’ storyline and the ahead-of-time visuals are guaranteed to keep you hooked.

The documentary begins by explaining how AI uses historical data for future prediction and throws light on a threat posed to civil rights by AI today.

Focused on AI, facial recognition and racial bias, the documentary has managed to educate and create waves of dialogue around technology and privacy breach.

Do the words ‘Cambridge Analytica’ ring any bell? In 2018, the firm purchased Facebook data on 87 million Americans without their consent for ‘political-voter surveillance.

At a running time of almost two hours, the film is told through the eyes of those who uncovered the scandal.

The film series shows that an advanced algorithm called Skynet decides to finish humanity, fearing that humans will try to get in its way and eventually destroy it.

Such a sci-fi concept illustrates that AI can become powerful and take over the world, turning against humans.

Evil smartphones, robots and a crazy family. The Mitchells vs. The Machines is an animated comedy where the Mitchells fight a robot apocalypse midway through a road trip to save humanity.

The film explores how people have become over-reliant on technology and need to improve communication plus value relationships.

The film is set in 2077, 60 years after an alien invasion left Earth abandoned and depopulated. The sci-fi adventure featuring Tom Cruise is about humans struggling to exist in an environment dominated by technology.

What makes this film age so well is that many of the issues it deals with have become central to our current-day socio-political climate. To say more would be a spoiler, but the questions this film raises about the human soul are more pertinent now than ever.

Earth is on the collapse of an environmental meltdown forcing its inhabitants to look towards other planets to colonise. With jobs scarce, spaceships make money collecting the debris in space. The story unfolds when, during one of their space runs, they come across a young girl in a derelict vessel they bring back to their ship, where they find out she’s a bomb made to go off in an EMP situation.

This sci-fi space opera is an amalgam of collective dystopian civilisations and my favourite elements of some of the best sci-fi films that have crossed our paths through the decades.

The film is based around an apocalyptic Earth, from the viewpoint of a lone scientist based in a research base in the Arctic Circle. He is accompanied by a child, abandoned by his hurriedly evacuated colleagues for company.

It is a thought-provoking drama that maintains realism in an environmentally dying world.

With a strong set-up, the film explores the human nature of making cold, calculated decisions, being put in an environment with robots and AI making those same decisions, forcing the soldier to develop humanity.

The film will make you wonder, ‘What is an acceptable collateral to end a conflict?’

The Wandering Earth lays out a crisis of unprecedented proportions: the Sun has become unstable, and within a hundred years, it will expand to consume Earth. Within 300, the entire solar system will be gone.

In the film, the government developed the most powerful and authorised AI ‘Moss’ to ensure the strict implementation of the ‘Wandering Earth’ plan. Wandering Earth moves briskly around the AI Moss comrade-turned monster, and once the conflict is set, you know what it will be: all-out action!

Depicting a not-so-distant future of NYC, the film is a slow-paced social commentary that gives the viewer time to make up their mind as the story unfolds.

The female-led sci-fi focuses on how fancy gadgets will not change some things about humanity.

See you yesterday is the perfect option for someone looking for a not-the-typical sci-fi adventure. The film maintains a perfect balance by being socially conscious and goofy.

In terms of technological brilliance, the film is refreshing and manages to handle time travelling in an uncliched manner.

Set in a dystopian future, things go haywire when the androids take power over humans and have created a television show to ridicule humans.

Enforced lockdown and security measures are taken by the in-house robots who sense the uprising and leave the characters in a confined space where most of this dark sci-fi comedy takes place.

The film takes place in an immersive post-apocalyptic atmosphere fully integrated with cybertechnology. A virus causes these automated systems to malfunction, sending humanity to the brink of extinction as their defences turn on them.

It is carried by the appeal of the details of the world, the remaining humans, and how they interact or try their best not to interact, all for control or survival in a world full of dangerous robots.

Though not entirely based on AI or data science, The Social Dilemma counts for a good watch in the Sci-Fi genre.

The movie is an accurate example of social media’s huge influence on our lives without us even realising it. The film consists of interviews with former employees that helped develop social media as we know it today.

The film explores several topics, from collecting to analysing data as per each individual to how recommendation systems work. Additionally, it covers conspiracy theories and mental health issues caused by media platforms.