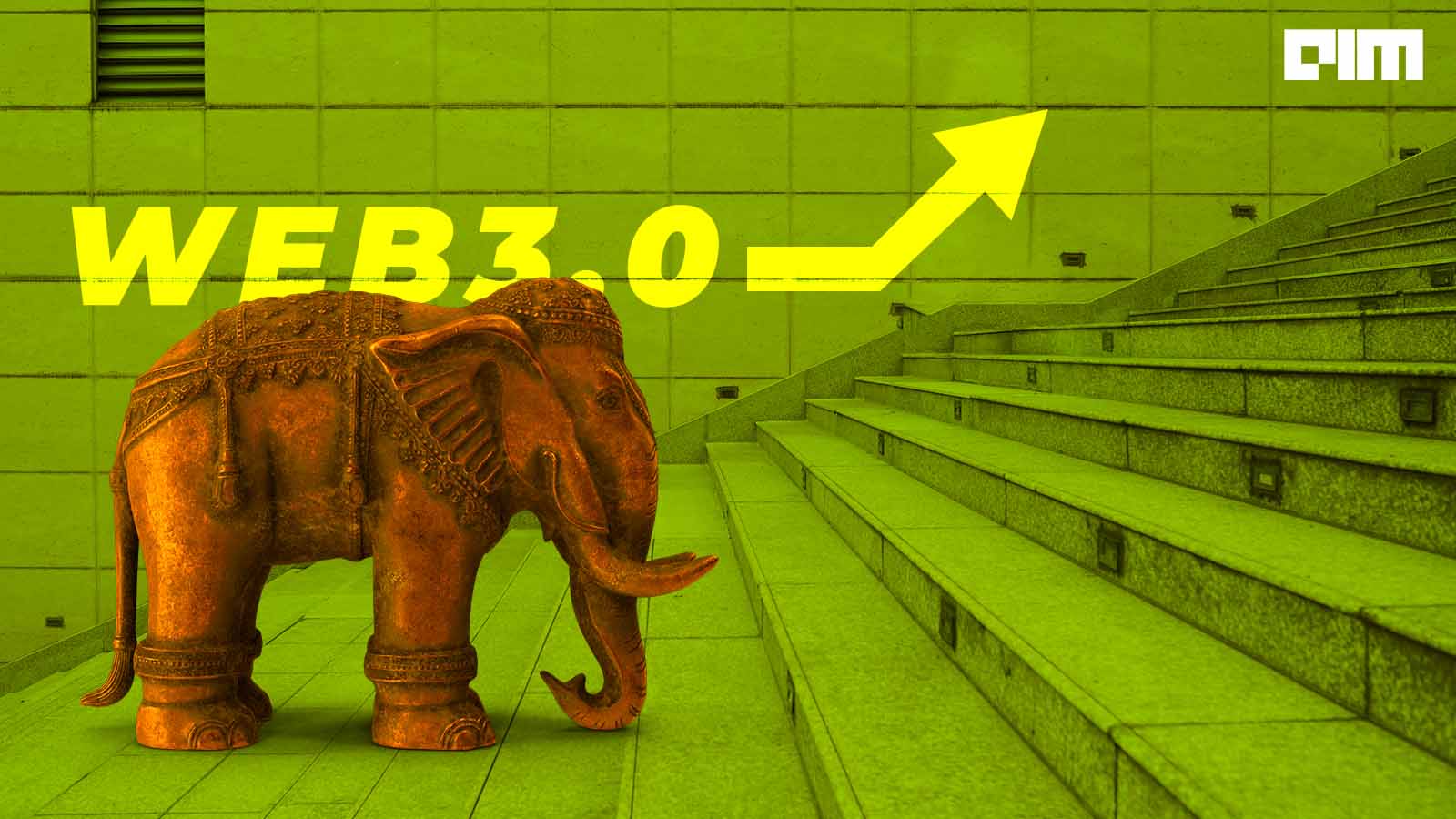 The third generation of the internet, Web3, is a combination of evolving technologies including blockchain, NFTs, digital avatars and more. The defining feature of Web3 is decentralisation. Writer and editor Max Reads explained Web3 as “software built on the blockchain — which is synchronised and held in common across multiple computers, instead of on servers owned by a single company — will be naturally decentralised, by virtue of how the blockchain works.”

Web1 is the brainchild of Tim Berners-Lee. The era of ‘Read-Only Web’, lasted roughly from 1989 to 2005. In comparison to Web1–characterised by static pages–Web2 is more interactive with user-generated content and interoperability. According to Chris Dixon of venture capital firm a16z, Web3 combines the best of both worlds; the decentralised ethos of Web1 with the interaction of Web2.

Technical and realistic barriers in creating a decentralised network notwithstanding, tech enthusiasts, entrepreneurs, and big tech companies are rolling in the Web3 hype. Facebook’s Meta rebranding, coinciding with the ring-fencing of USD 10 billion to build out the metaverse, is a good case in point.

Meanwhile in India, the government announced a 30% tax on cryptocurrencies and other virtual digital assets during the 2022 Union Budget. However, the country lacks a robust policy to support Web3.

With over 749 million internet and 518 million social media users in 2020, India is the world’s second-largest internet population after China. The tipping point was the entry of Reliance Jio Infocomm. The network carrier offered cheap high-speed 4G data services, racking up over 100 million customers in just six months. That said, India was late to the Web2 party.

India fell short of leveraging Web1 and Web2  movements because of a lack of infrastructural facilities, policies and misplaced priorities.

“We lacked focus on semiconductor design and manufacturing,” said Pradeep Mishra, Senior Vice President, Purchasing and Supply Chain at VE Commercials. “India’s focus post-independence was to develop capabilities in manufacturing to address fundamental self-reliance on basic sectors of Steel, Oil & Gas and Mineral development. This helped build indigenous capabilities and generated job opportunities outside the agriculture sector. We also set up premier educational institutions, like IITs and IIMs, to bridge knowledge, technology, research, and skill gaps. In the second wave of Industrialisation, our policy focused on developing auto, IT and IT-enabled industries,” he said. India’s IT initiatives during globalisation led to economic growth from the 90s to 2010, and made the country a “global powerhouse for software development”, he added.

Software development is the backbone of Web3. According to a US-India Strategic Partnership Forum (USISPF) report, Web3 will contribute USD 1.1 trillion to India’s GDP, propelling the digital Indian economy’s value from USD 5 billion in 2021 to USD 262 billion by 2031.

“The current wave is driven by IT-led manufacturing. India is on the cusp of a unique opportunity to expand and enhance our IT capabilities with AI collaboration. Our strong manufacturing ecosystem is becoming the biggest global hub for technology products. This can cover the entire spectrum from research, design, development, manufacturing, and servicing. Opportunity is immense for India to announce its arrival in this space,” said Pradeep.

With China’s iffy stance on Crypto, India has one less rival to contend with to make headway in Web3.

Why India should not miss out on Web3

Biswajit Biswas, Chief Data Scientist, Tata Elxsi, described Web3 as the natural progression of the current state of Web. “The current Web revolutionised people-to-people connect or gave rise to social media and mobile-first technology where sophisticated applications can be built almost overnight. Web3 thought process is AI-first, highly decentralised, hyper-personalised and bringing Meta or VR at its core,” he said.

India missed out on the first-mover advantage in Web1 and Web2. Getting in on the ground floor of Web3 can power India’s ambition to become a tech superpower.

On the other hand, reluctance to embrace blockchain technology can hurt the Digital India mission in more ways than one. “The internet, as we know it today, is transforming faster than we anticipated and in ways that we could never have anticipated. In turn, the impact of this transformation will change how we collaborate and how we engage with each other and with other digital entities,” said Suresh Chintada, CTO, Subex.

Being a developing country, most of India’s population cannot access predominantly English and expensive technology. The decentralised nature of Web3 and the convergence of technologies will hopefully level the playing field.

What do we need?

“There are four key parameters that will enable Web3. These are the availability of massive computing power, very high bandwidth, smart embedded devices, and data & AI/ML technologies. While Web2 was about humans consuming content and communicating with other humans, Web3 demands intelligence in pretty much everything because, along with humans, machines will be able to interpret and consume the massive amounts of data on the web,” said Suresh.

Meanwhile, Biswajit said Web3 products will have implications on hardware and other infrastructures.“For example, both AI and blockchain rely on heavy computing and storage resources, low latency communication with sufficient bandwidth, bringing 5G to the fore, and its ubiquitous deployment is essential. So, Web3 is not a standalone technology. It is, in fact, in the cross current of some of the megatrends like AI, Blockchain, IoT, and 5G, which are heavily dependent on infrastructure and the interconnected ecosystem,” he added.

Suresh dilated on India’s status quo with respect to Web3 adoption. “India is on the cusp of unleashing 5G networks by 2023, which would help address bandwidth requirements and improve access to Web3. We have some ways to go regarding the availability of cheap computing infrastructure, but it will become a reality in the future. Quantum computing was a theory a few years back, but now it’s a reality. We will see that being offered on tap in the years to come,”he added.

In 2021, the India government introduced the National Blockchain Strategy, NSB, a 52-page document and a framework for businesses developing services based on blockchain tech. According to a cabinet note accessed by NDTV, the government plans on bringing in SEBI to regulate crypto as an asset. The ‘assets’ will be on Indian exchanges, and India citizens are not allowed to keep them on foreign exchanges or in private wallets. To enable Web3 in India, we need solid frameworks and favourable policies.

Today, many Indians can not access Web2 facilities given language barriers, unavailability of the network, expensive services and lack of tech knowledge. “The technology is not much productive until it is helping a local farmer who speaks vernacular language by telling him the best techniques to store his grains or the latest fertiliser practices, spotlighting a great opportunity for technology to solve the challenges of feeding the billions of people on our planet,” said Vishal Dhupar, Managing Director, Asia South, NVIDIA. He said it is critical to ensure tech accessibility through policies and infrastructural development.

“Web3, in its evolutionary trajectory, tries to optimise the processing and consumption of data and services at the spatial interaction layer. This technology will accommodate interaction with every possible sensory interface and make experiences real-time and super personalised. No one thought, twenty years back, a smart mobile phone with a dozen arrays of sensors would be affordable under USD 150. We all use AI in our daily life already, almost at no cost. Decentralisation has its advantages. As no organisation or any few large entities can own or control the data or its flow in the Web3 ecosystem, it is more democratised, and by design, it would be inclusive,” said Biswajit.

Suresh is also optimistic about India’s Web3 play.“I believe we have the smarts to make that happen, and perhaps it will take much less time than what we took to put Web2 in people’s hands in India. Web3 will be about data decentralisation, perhaps a more transparent and secure environment due to underlying technologies like digital ledgers, and a promise of a fairer internet with the power to transition from Internet platform giants to individuals,” he said.

The carbon footprint of blockchain is huge. To put things in perspective, one Ethereum transaction equals 74,000 Visa transactions and an average NFT transaction emits 48 kg of CO2. According to Digiconomist, Ethereum’s network usage of 99.6 Terawatt-hours of electricity per year trumps the annual energy consumption of countries like the Philippines or Belgium. Now, major cryptocurrencies are moving to Proof of Stake to reduce CO2 emissions.

India is set to update its 2030 climate targets under the Paris Agreement. To that end, the country should take into account the huge carbon footprints of blockchain technology while forming policies.

Data sovereignty is another major challenge. While Web3 is not limited by geography given its decentralised nature, how will country-specific policies play out? We will have to wait and see.