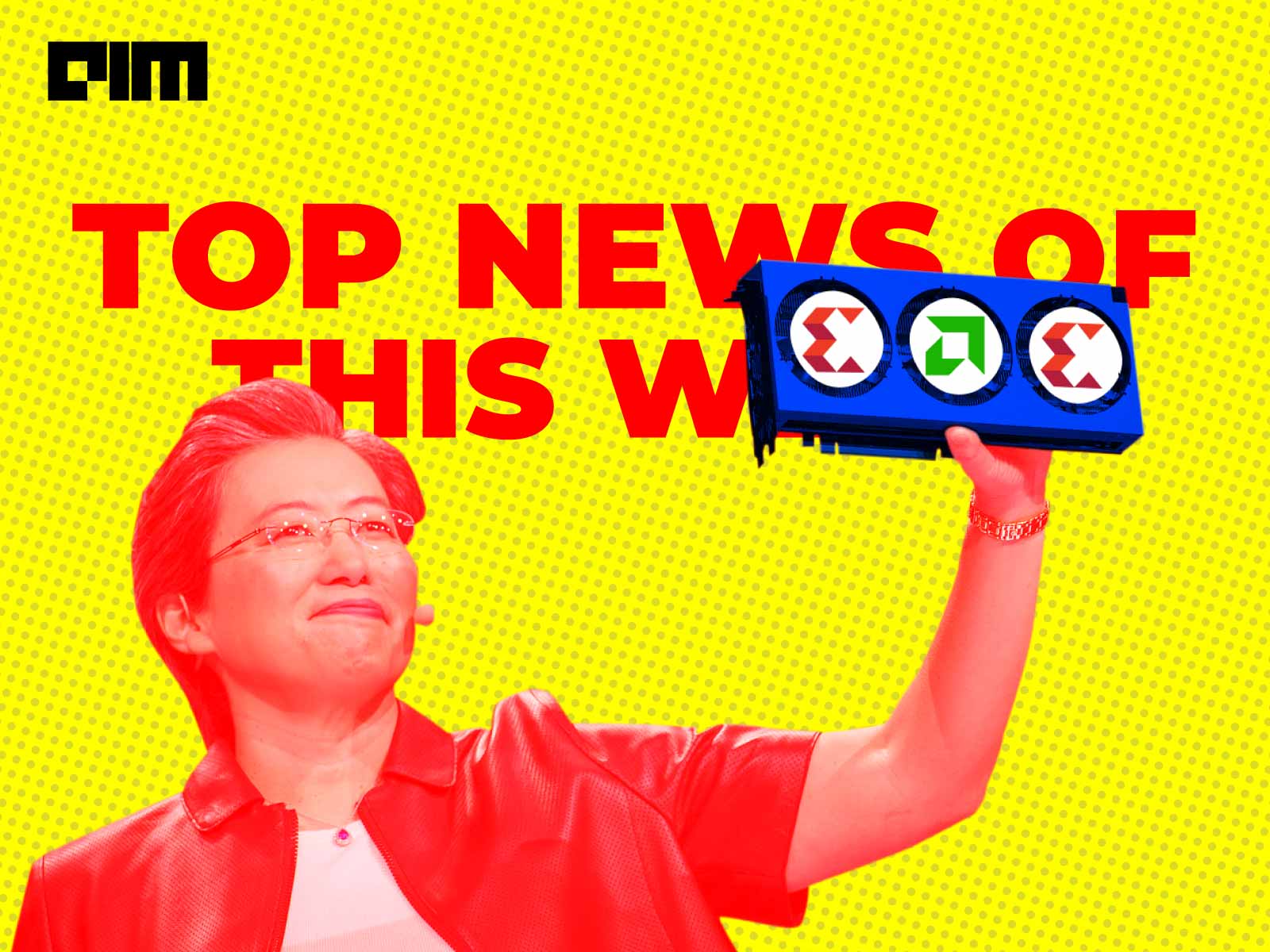 In the last week’s top news, we briefed about the AMD-Xilinx rumor mill. And, it turned out to be true. AMD bagged their rival Xilinx for a hefty $35 billion deal. This marks another tectonic shift within the semiconductor industry followed by NVIDIA’s deal with ARM last month. AMD’s goal of chipping off market share from Intel is no more a secret now. Read more about why AMD bought Xilinx and what is at stake for Intel in this week’s top news brought to you by Analytics India Magazine.

On Wednesday, Microsoft made Clarity, their free-to-use analytics product generally available. Clarity promises to be a good substitute for Google Analytics by providing the tools to make informed decisions about changes to websites using real evidence. Along with heatmaps, session playbacks, Clarity offers a wide range of options for real time insights. Be it 10 visitors per day or 1,000,000, Clarity will handle traffic with no additional cost.

On Tuesday, AMD announced that it would be acquiring Xilinx in an all-stock transaction valued at $35 billion. Advanced Micro Devices(AMD) specialises in making chips for personal computers, especially gaming PCs. Whereas, Xilinx’s highly-flexible programmable silicon, enabled by a suite of advanced software and tools is designed to drive rapid innovation across a variety of industries and technologies. With this purchase, AMD looks to diversify its market share and customer reach, which would definitely send warning signals to its competitors like Intel. Read the full story here.

Putting an end to what has been a lacklustre week, Intel announced that  it will acquire SigOpt, a San Francisco-based provider of a leading platform for the optimization of AI software models at scale. SigOpt’s AI software technologies deliver productivity and performance gains across hardware and software parameters, use cases and workloads in deep learning, machine learning and data analytics. According to the press release, Intel stated that it plans to use SigOpt’s software technologies across Intel’s AI hardware products to help accelerate, amplify and scale Intel’s AI software solution offerings to developers. SigOpt’s software technologies combined with Intel hardware provide competitive advantages and differentiated value for data scientists and developers, and they complement Intel’s existing AI software portfolio. The deal is expected to close this quarter and the transaction terms remain undisclosed.

ML Will Help Turn Your Web Pages Into Videos

With this new tool from Google AI, users can turn their web pages into quick interactive videos. Google’s URL2Video is a research prototype pipeline to automatically convert a web page into a short video, given temporal and visual constraints provided by the content owner. According to the researchers at Google, URL2Video extracts assets (text, images, or videos) and their design styles (including fonts, colors, graphical layouts, and hierarchy) from HTML sources and organizes the visual assets into a sequence of shots, while maintaining a look-and-feel similar to the source page. Given a user-specified aspect ratio and duration, it then renders the repurposed materials into a video that is ideal for product and service advertising. In short, Google wants ML to be your graphic designer.

The quarterly reports are out and the tech giants have crushed the numbers. The financial results announced Thursday revealed how the big four continue to benefit from the increased usage of cloud-computing and digital advertising thanks to the pandemic. Amazon registered a record $96.2 billion revenue this quarter thanks to online sales and AWS. Whereas, Google’s parent company Alphabet Inc., declared that their digital advertising revenue rose nearly 10% to $37.1 billion compared to last year. Apple, Facebook and Twitter have reported positive results.

However, the news of earnings were overshadowed by the ongoing brawl between the United States and the internet companies. Twitter’s CEO Jack Dorsey came under fire for the platform’s shaky policies and dubious stance with regards to freedom of speech. As the lawmakers prepare to tighten the screws, the tech companies are inadvertently finding new ways to get into trouble. Read more about the antitrust lawsuit here.

As reported by Bloomberg first, Apple’s acquisition of Barcelona-based startup Vilynx has come through. Vilynx is an AI startup that primarily works on building tools for computer vision applications. Apple’s Siri can greatly benefit from Vilynx’s innovation. According to reports, Apple intends to turn Barcelons into one of their artificial intelligence research and development centers in Europe.

Microsoft Shares Its ‘Lobe’ For All

An app called Lobe was released by Microsoft this week. This app claims to make machine learning deployment easier than ever before. Lobe uses open-source machine learning architectures and transfer learning to train custom ML models on the user’s own machine and requires no internet connection or logins. Training is automatic and users can start by simply importing images of the things they want Lobe to recognize.

Once training is done, the models can be easily exported to run on industry standard platforms and work in apps, websites or devices. That allows people to create end-to-end machine learning solutions at home or in the workplace, such as creating an alert when a resident raccoon gets their garbage or flagging when an employee in a dangerous situation isn’t wearing a helmet. Lobe is available for download on Windows or Mac computers. Try Lobe here.