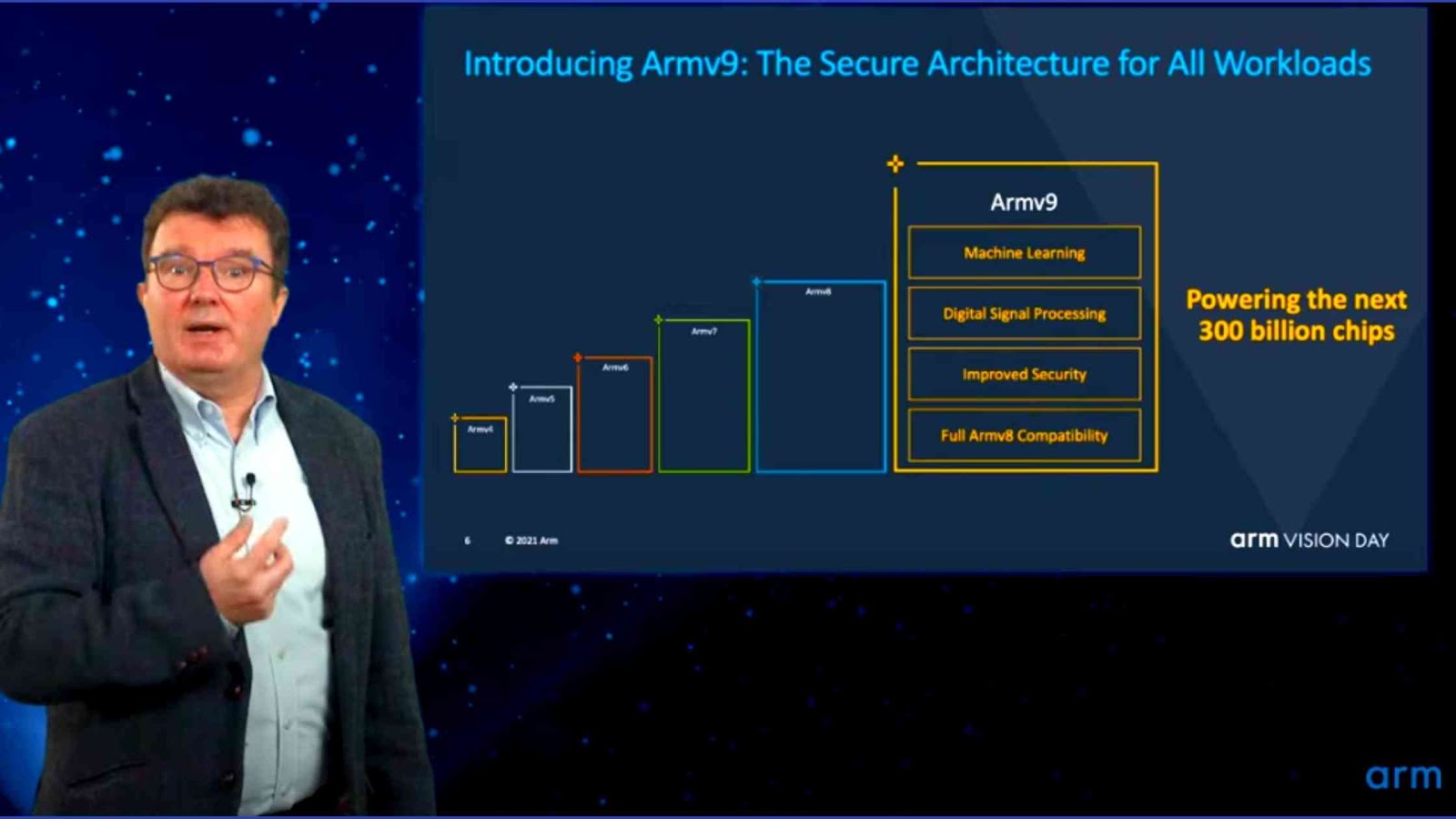 “As we look toward a future that will be defined by AI, we must lay a foundation of leading-edge compute that will be ready to address the unique challenges to come. Armv9 is the answer. It will be at the forefront of the next 300 billion Arm-based chips driven by the demand for pervasive specialized, secure and powerful processing built on the economics, design freedom and accessibility of general-purpose compute,” said Simon Segars, chief executive officer, Arm.

The most significant feature of Armv9 is the Arm Confidential Compute Architecture (CCA). It introduces the concept of dynamically created Realms that can be used by all applications where the data is concealed from the operating system and other apps on the device.

Unlike traditional security models that allow privileged software to see lower-tier applications’ execution, Realms can help shield sensitive data and code from the rest of the device and privileged software by performing computations in a hardware-based secure environment. Think of them as secured containerised execution environments entirely opaque for the OS or hypervisor. Instead of hypervisor, Realms are managed by a Realm manager. These are roughly one-tenth the size of a hypervisor.

Realms could significantly reduce the chain of trust of a given application running on a device since the OS is now transparent to the security issues. Mission-critical applications that require supervisory controls will be able to run on any device. This is highly beneficial and can potentially phase out the need for businesses to use only dedicated devices with authorised software stacks.

Armv9 continues to use the AArch64, which was introduced in v8. In v9, the AArch64 is used as the baseline instruction set. The most important addition to the AArch64 architecture is Scalable Vector Extension version two (SVE2).

The first implementation, Scalable Vector Extensions (SVE), was first introduced in 2016. It was developed following the Neon architecture extension, which has a fixed 128-bit vector length for the instruction set.

SVE2 differs from SVE due to the functional coverage of the instruction set. While SVE was designed for HPC and ML, SVE2 goes beyond and extends the SVE instruction set to enable data-processing domains beyond HPC and ML. The SVE2 instruction set can enhance standard algorithms used in applications such as computer vision, multimedia, genomics, in-memory database, web serving, long-term evolution (LTE) baseband processing and general-purpose software.

SVE2 also adds a vector-width-agnostic version of the Neon instructions in most integer Digital Signal Processing (DSP) and media processing functionality. This helps compilers to vectorise more effectively for these domains.

Arm has boosted the CPU performance at a rate much faster than than the industry average. The ARM spokesperson said the momentum would carry over to the Armv9 generation. Users can expect a CPU performance increase of 30 percent over the next two generations of mobile and infrastructure CPUs.

The Total Compute design principles will be applied across the entire IP portfolio of automotive, client, IoT, and infrastructure. Further, Arm is also developing technologies to increase frequency, bandwidth, and cache size to maximise the performance of Armv9-based CPU.