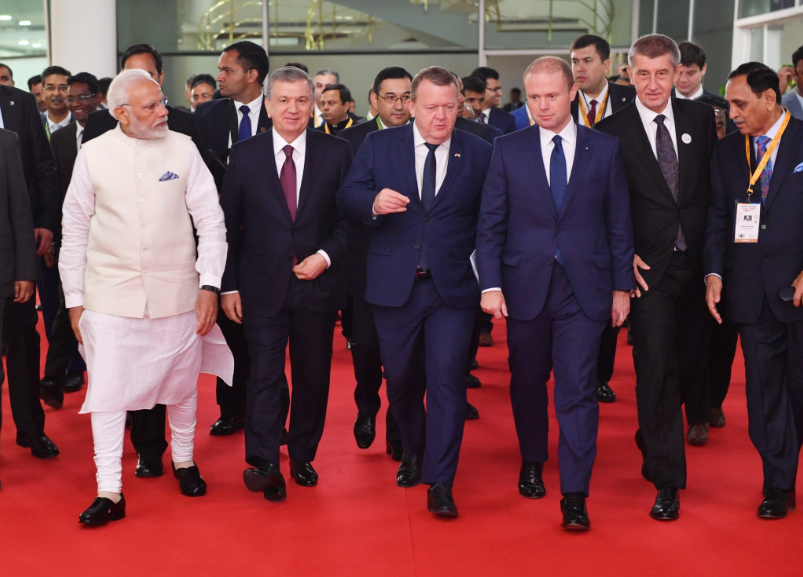 Here Are The Glimpses Of What PM Modi Discussed With The Four World Leader:

According to reports, PM Modi thanked President Mirziyoyev for his support for the First India-Central Asia Dialogue “where important discussions also took place on support to peace and development in Afghanistan”.

India is honoured to host the President of the Republic of Uzbekistan, Mr. Shavkat Mirziyoyev.

We had fruitful talks on the sidelines of the Vibrant Gujarat Summit in Gandhinagar. We discussed various aspects relating to India-Uzbekistan ties. @president_uz pic.twitter.com/Y14sqvBFtt

During the conversation, Shavkat Mirziyoyev said that the dialogue “demonstrated India’s positive impact on the Central Asia region and the joint quest of the participant countries for peace in Afghanistan.” Also, taking India’s energy requirement as one of the priorities,  Novoi Minerals and Metallurgical Company of Uzbekistan signed an agreement with India’s Atomic Energy department regarding a long term supply of Uranium Ore Concentrate.

Lars Løkke Rasmussen is the 2nd Nordic leader after Norway’s Prime Minister Erna Solberg to visit India this month. During the event, PM Modi and Rasmussen discussed the technology cooperation regarding trade, energy, agriculture and other areas, and also about reviving the ties between the two nations.

Had an excellent meeting with PM @larsloekke of Denmark.

Denmark is a valued friend and we discussed deepening cooperation in energy, trade, agriculture and other areas. pic.twitter.com/p3eP0jqUMW

From shipping to renewable energy to environment to agriculture to food processing, around 130 Danish companies have invested in different areas in India.

In conversation with Dr Joseph Muscat, PM Modi discussed verticals like Indian Pharma and IT industry (especially Artificial Intelligence). Furthermore, Dr Muscat invited India to cooperate with Malta on technologies like Artificial Intelligence, Block-chain, and fintech. Malta, which is also unofficially known as the “1st blockchain island” brought in formal legislation on Block-chain technology and sees Indian IT playing a vital role.

Great meeting with PM @JosephMuscat_JM of Malta. Our talks will add tremendous strength to bilateral ties between our nations and benefit the people of our countries. pic.twitter.com/pHwdnNcBCt

From Defense to transportation to manufacturing, PM Modi and Andrej Babis had a wide range of discussions at the summit. The Czech PM has also invited nomination of an Indian scientist for its R&D Council.

Mr. Andrej Babiš, the Prime Minister of the Czech Republic and I held wide-ranging talks in Gandhinagar. His presence at the Vibrant Gujarat Summit is a great gesture. We discussed bilateral cooperation in defence, transportation and manufacturing. pic.twitter.com/ttVYVcc5Ca

Witnessing the grand success of the event, many officials took to Twitter and shared their moments from Vibrant Gujarat.

I have been a regular participant at #VibrantGujarat. Delighted to see it grow, evolve & progress from an investment event to a collaborative partnership summit.Vast participation from leading global CEOs,a range of countries & domestic investors. Tremendous energy & dynamism. pic.twitter.com/fsBG89XFtm

Inauguration of the 9th Edition of the #VibrantGujarat Global Summit by Hon'ble PM Shri @narendramodi Ji at Mahatma Mandir in Gandhinagar. #ShapingANewIndia pic.twitter.com/sy5BNOBdWm

#VibrantGujarat 2019: A resonating and echoing success!

Thank you PM @narendramodi for this visionary concept which has become an integral part of Gujarat's economy and CM @vijayrupanibjp for brilliantly executing it. pic.twitter.com/tJV5yDMNAh