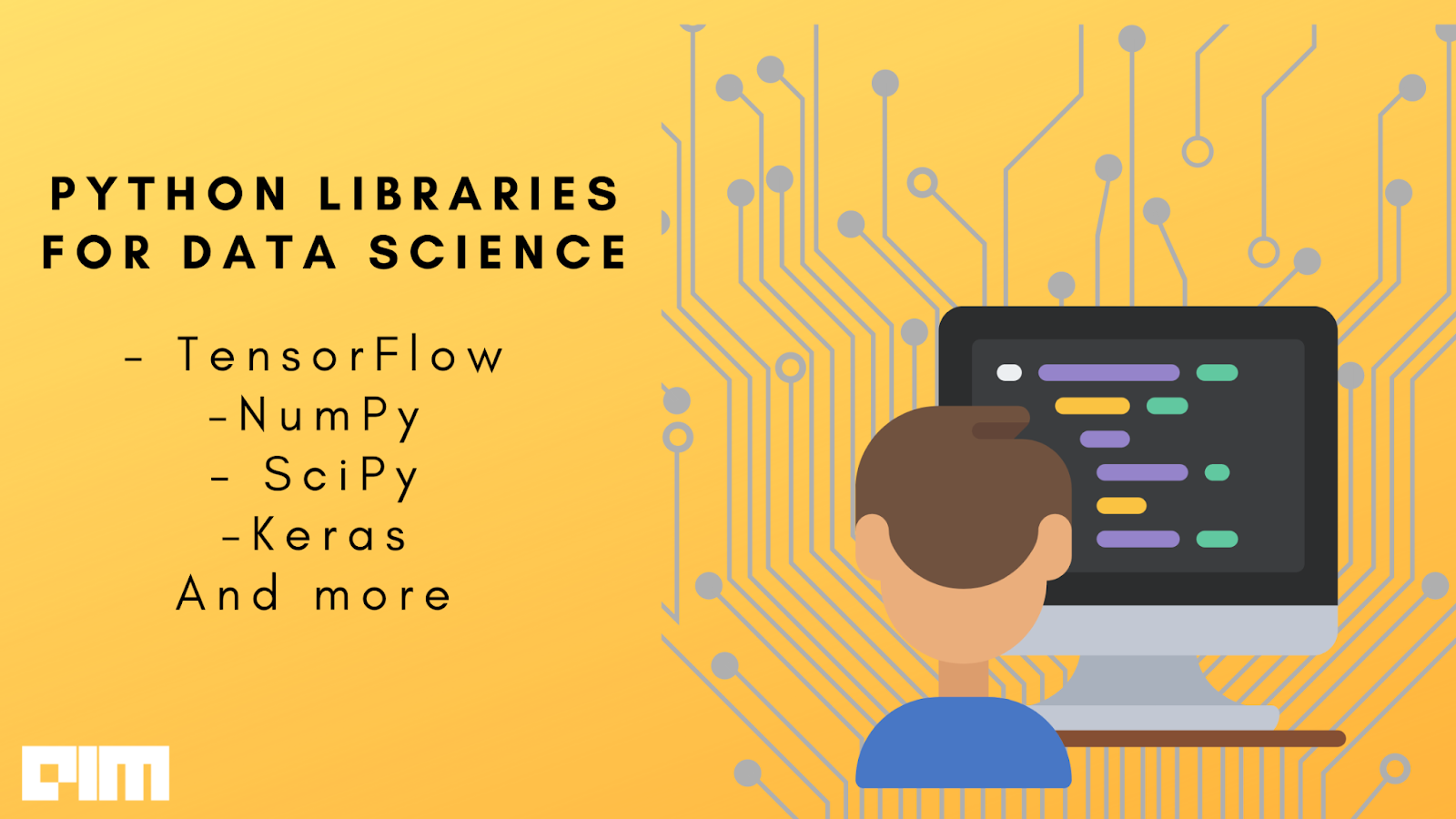 Python is an interpreted, interactive, portable and object-oriented programming language. This open-sourced general-purpose language runs on many Unix variants, including Linux and macOS, and Windows. Python has applications in hacking, computer vision, data visualisation, 3D Machine Learning, robotics, and is a favourite of developers worldwide.

Below, we list the ten most popularly used Python libraries for Data Science:

Developed by Travis Oliphant in 2015, NumPy or Numerical Python is a fundamental library for mathematical and scientific computations. The open-source software has functions of linear algebra, Fourier transform, and matrix computations and is mainly used for applications where speed and resources are important. NumPy aims to provide array objects 50x faster than traditional Python lists.

Data science libraries including SciPy, Matplotlib, Pandas, Scikit-Learn and Statsmodels are built on top of NumPy.

SciPy or Scientific Python is used for complex mathematics, science and engineering problems. It is built on the NumPy extension and allows developers to manipulate and visualise data.

Developed by John Hunter, Matplotlib is one of the most common libraries in the Python community. It is used for creating static, animated and interactive data visualisations. Matplotlib provides endless customisation and charts. It enables developers to use histograms to scatter, customise and configure plots. The open-source library offers an object-oriented API for integrating plots into applications.

Developed by Wes McKinney, Pandas is used for data manipulation and analyses. It provides fast, flexible and expressive data structures and provides features such as handling of missing data, fancy indexing and data alignment.

Pandas provides fast, flexible and expressive data structures that helps developers work with labelled and relational data. It is based on two main data structures– Series, and Frames.

Open-source software library Keras provides an interface for the TensorFlow library and enables fast experimentation with deep neural networks. It was developed by Francois Chollet and was first released in 2015.

Keras offers utilities for compiling models, graph visualisation and dataset analysis. Further, it offers prelabeled datasets that can be imported and loaded directly. It is user-friendly, versatile and suited for creative research.

SciKit-Learn is an effective tool for predictive data analysis.

Statsmodels is part of the Python scientific stack, oriented towards data science, data analysis and statistics. It is built on top of NumPy and SciPy and integrates with Pandas for data handling. Statsmodels allows users to explore data, estimate statistical models and perform statistical tests.

Plotly is a collaborative, web-based analytics and graphing platform. It is one of the most powerful libraries for ML, data science and AI-related operations. Plotly is publication-ready and immersive and is used for data visualisation.

Plotly can easily import data to chart, allowing developers to make slide decks and dashboards with ease. It is used for the development of tools like Dash and Chart Studio.

Seaborn is Python’s most commonly used library for statistical data visualisation, used for heatmaps and visualisations that summarise data and depict distributions. It is based on Matplotlib and can be used on both data frames and arrays.