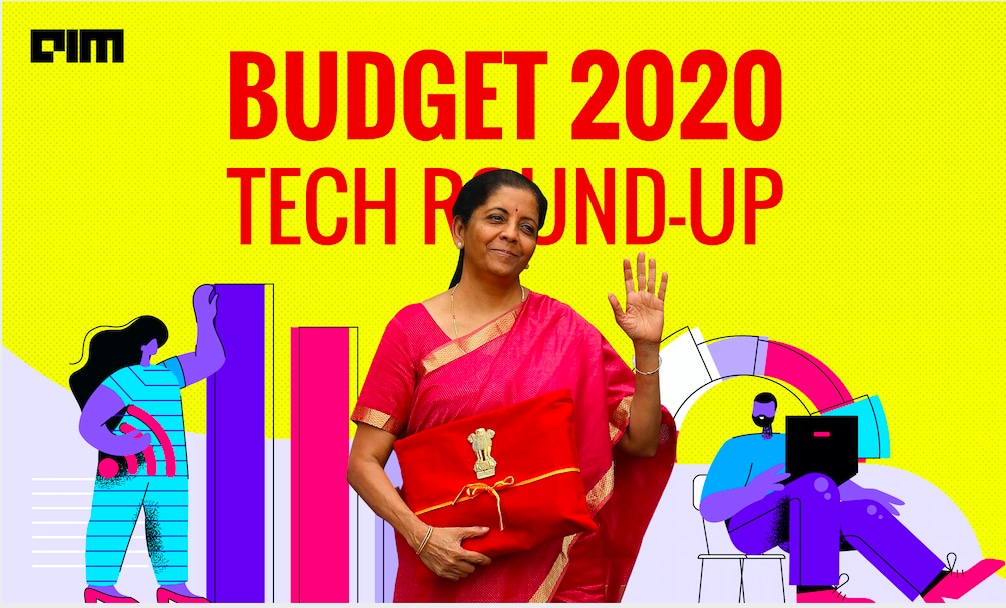 During the budget speech, the finance minister of India said, “It is now a cliche—data is the new oil—and, indeed, analytics, AI, fintech and the internet of things (IoT) are quickly transforming the way we deal with our lives,” Sitharaman stated.

According to analysts, even though there were a few announcements made on deep technologies, the Union Budget had a mixed perspective in terms of technology. But overall, the government had recognised the impact of technology in building the new age economy. Let’s take a deep dive to understand what came out of the Union Budget for the technology industry in terms of deep technologies and what various industry leaders think about it.

Among tech leaders and industry experts, the government’s plan to roll out a policy to assist the private sector, in order to create data centre parks throughout India, has been hailed as a much a welcome move. The emphasis on building a strong IT infrastructure through the creation of ‘Data Parks’ for an effective and integrated digital network can make India a robust digital economy.

The finance minister recognised the impact of technology in building the new age economy. “It is now a cliche—data is the new oil—and, indeed, analytics, fintech and the internet of things (IoT) are quickly transforming the way we deal with our lives,” Sitharaman stated. “To take advantage of this, I propose a policy to assist the private sector in building data centre parks throughout India. It will empower our firms to incorporate data in every step of their value chains skillfully,” she said during the budget speech.

On that note, Suganthi Shivkumar, Managing Director for ASEAN, India, and Korea, Qlik said, “We appreciate the government’s announcement to allocate the necessary funds and resources towards building revolutionary and breakthrough technologies like ML, robotics and AI to further the skills that will help India for the next wave and accelerate the country’s journey towards becoming a digital giant. As the data was equated as the new oil, the government’s plan of building cutting-edge data parks across the country is equally significant.”

Supria Dhanda, Vice President and Country Manager, Western Digital India also shared her thoughts on this. “With the announcement of the Budget 2020, it is motivating to see the initiatives to further advance the technology sector. We look forward to collaborate with the Government and industry to fuel the vision for data-centric innovations. The government’s plan to enable the private sector to build data center parks across the country highlights the huge potential of data. Addressing the need for technology and stressing on the importance of AI, Analytics and IoT will enable the country to embrace the technological advancements required to succeed today. We are happy to see the Government’s efforts to drive a positive change and position India as a technology leader,” said Supria Dhanda.

Speaking on the government’s announcement of establishing a policy for building data centre parks throughout India and spending Rs 6,000 crores for BharatNet, Sandeep Bhambure, Vice President and Managing Director, India & SAARC at Veeam said, “This is a big step towards a successful Digital India initiative and will increase the adoption of technologies such as internet of things, analytics and AI, which in turn will cause an unprecedented amount of data generation.”

According to experts like Sandeep, data management and protection that will come along with data centre parks will play an important role in protecting the citizen’s data from cyberattacks and breaches. Moreover, the execution of intelligent data management platforms will help in creating positive outcomes from the data. On the other hand, creating data centres in India can also be challenging given the costly real estate, huge electricity consumption, and heavy expenses on improving wide area network connectivity.

The proposed policy directly takes on a highly-debated clause in India’s personal data protection bill, which mandates that data collected by foreign companies and tech giants like Facebook, Microsoft and Google from India be stored on Indian network servers. So far, the government’s proposal has been considered unrealistic, given the lack of infrastructure.

“We believe this is in view of the government’s efforts to push data localisation as data will be one of the crucial drivers of the economy. Localised data centres which can be accessed and controlled from a centralised system will significantly improve data privacy and security allowing the free flow of data within borders,” told Venkatraman Swaminathan, Vice President & Country General Manager at Schneider Electric IT Business India.

While the government had previously set up a national portal for AI research and development, in the latest announcement, the government has continued to offer its support for tech advancements. The same is reflected in the finance minister’s promise of releasing a policy for the private sector to establish data centre parks throughout the country.

Atul Rai, Co-Founder & CEO of Staqu said “At Staqu, we are working continuously putting efforts on leveraging AI to meaningfully process data in the form of images, text, speech, etc. We appreciate the government’s emphasis on promoting cutting-edge technologies in India. In the Union Budget 2020 announcement, the finance minister observed that technologies like machine learning, robotics, AI, along with a number of productive age groups (15-65 years) are cross-cutting streams in India, which is a special attribute for our country.”

“Presently, there is no large-scale foreign investment in data centres in the country. There is no policy or framework on how global data centres hubs can be built in India. If the government has a clear cut policy on it, then India could fundamentally become a data centre hub for global enterprises,” according to Vishal Malhotra, a tax partner at Ernst & Young (EY).

Mike Chen, Regional Director, at TCL, also said, “We believe that the finance minister has announced a positive Union Budget 2020. Proposing the scheme to boost the manufacturing of mobile phones, semiconductor packaging and electronic equipment is certainly a welcomed move, and we look forward to completing government policy and utilising the same to start the domestic manufacturing through our panel factory in Tirupati. The finance minister also acknowledged in her budget speech advanced technologies such as IoT, AI, and analytics transforming the world. At TCL, we are dedicated to advancing our ‘AI x IoT’ ecosystem in the country and will move forward to invest in cutting-edge technologies offering the best services to our customers in India.”

“The new economy is based on innovations which disrupt established business models,” Sitharaman said. “Artificial intelligence, IoT, 3D printing, drones, DNA data storage, quantum computing, etc., are re-writing the world economic order. Quantum technology is creating new frontiers in computing, communications, cybersecurity with wide-spread applications. It is expected that many commercial applications would come out from theoretical constructs that are developing in this area,” said Nirmala Sitharaman during the budget speech.

For quantum computing, the finance minister proposed ₹ 8,000Cr for over five years for the National Mission of Quantum Technology and Application. Realistic quantum computers are still a distant dream, but experts believe that it’s a risk that the country, and must ensure self-reliance in the latest computing technologies.

Sitharaman in her budget speech also said that the new economy would be based on innovations that disrupt established business models which use artificial intelligence (AI), internet of things (IoT), 3D printing, drones, DNA data storage, quantum computing and others. The emphasis on artificial intelligence and objectives created set for quantum computing is being deemed as a step to strengthen India’s current position in cutting edge technologies. As AI, ML, analytics, IoT, and robotics making huge inroads in the country, the policy to build data centre parks throughout India will help in boosting the digital infrastructure to a large extent.

Top Machine Learning Projects Launched By Google In 2020 (Till Date)

How AI Helps In Early Detection Of Coronavirus Outbreak

Upcoming AI Conferences To Look Forward To In 2021

India Is Getting Ready For Mass Production Of Semiconductor Chips

Top 8 Upcoming AI Events To Look Out For

10 Exciting Webinars & Workshops In Machine Learning To Look Forward To