Budget 2021: Reactions From The Tech Industry 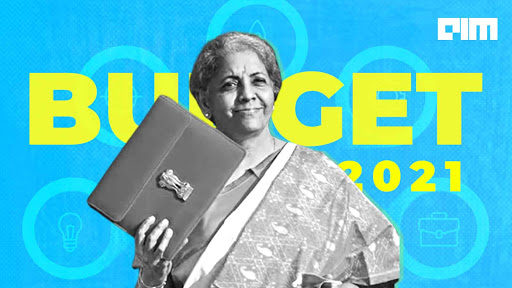 The budget has come at a time when the country is still struggling with the massive economic slowdown precipitated by COVID pandemic. However, despite this downturn, businesses have seen a significant push towards digitisation, including acknowledging the importance of artificial intelligence across industries. As a matter of fact, India is considered one of the fastest-growing digital markets globally.

According to the experts, the technology sector has been quite optimistic about this year’s budget. Companies were expecting the government to create a roadmap to achieve a trillion-dollar economy. With that in mind, the Indian government took several steps to help the tech industry, including setting up a fintech hub at Gift City, encouraging digital payments, using AI in governance, and framing policies for building data parks. Many believe it to be a balanced and far-sighted budget.

“The focus on innovation and R&D as an important pillar is a critical step in increasing the Indian IT sector’s export income. Along with this, the Atmanirbhar Bharat budget also outlines initiatives for the gig economy, digital payments, human capital while also setting up a fintech hub and National Natural Language Translation Missions,” said CP Gurnani, MD & CEO of Tech Mahindra.

Here are some of the detailed industry reactions —

The booming digital payments industry has received a budget execution of ₹1,500 crores, critically earmarked to boost the sector and deploy innovative business solutions. The budget has also proposed developing a fintech hub at Gift City to stabilise the economy. Experts believe the budget showcased commitment to a robust digital future and rebuilding the Indian economy.

Madhusudan Ekambaram, the co-Founder & CEO, of KreditBee, a platform facilitating loan transactions, said: “The government’s decision to boost entrepreneurship and digital payments in India is a testament to its commitment to realise its vision of an economically self-reliant nation.”

He said the COVID-19 pandemic had given a fillip to the adoption of digital payments. “The scheme announced to promote digital payments will help create a robust and dynamic payments ecosystem in India’s emerging digital economy,” said Ekambaram.

Echoing similar thoughts, Ankit Ratan, co-founder and CEO of Signzy, said the push for digital payments and a fintech hub’s announcement shows the government’s seriousness in digitalising banking. “We do hope Indian banks will pick on the sentiment and embrace digitalisation of their processes in collaboration with the flourishing fintech ecosystem,” said Ankit.

The proposal to use AI, ML and data analytics for the Ministry of Corporate Affairs is an encouraging move for the tech ecosystem. “The suggestion to introduce AI-based features in MCA 21 3.0 to address compliance needs of startups is another thoughtful step in creating a conducive business environment for entrepreneurs,” added Ankit.

Sashank Rishyasringa, the co-founder & MD of one of the largest digital lenders in the country, Capital Float, also appreciated the budget. “The proposal to facilitate the development of a world-class fintech hub in Gujarat will be appreciated by fintech locally as well as nationally. Also, the allocation of budget to promote digital modes of payment will be a growth accelerator for the fintech industry,” said Sashank.

However, Rajeev Agrawal, CEO & Founder of Innoviti Payment Solution, believes that, while digital payments have become the norm in urban centres and for high ticket purchases, there is still a lot to be done for small value payments in tier-2/3/4 cities. “Fast offline payments such as tap-and-go, without the need for any network connectivity at the time of the transaction can multiply the adoption rapidly. And, we hope the budget allocation can find its way into this and other such initiatives.”

Encouraging The Use Of AI and ML

In this year’s budget, the finance minister has also proposed artificial intelligence and machine learning for the Ministry of Corporate Affairs. This is expected to make regulatory filings frictionless and introduce AI-based features for MCA-21 version 3.0. Some of the key features include online compliance monitoring and e-adjudication.

Commenting on this, Shibu Paul, the Vice President – International Sales at Array Networks, said, “The government’s proposal to use data analytics, AI and ML for the Ministry of Corporate Affairs’ database is a boost to the digitalisation.”

In agreement, Gaurav Shinh, the founder & CEO of DAAS Labs, said, “The budget has left the data science community quite excited for what is to come. The launch of multiple data analytics, AI, ML-driven models for e-security, e-education, e- consultation, and compliance management is really interesting. Also, the prospect of using artificial intelligence and machine Learning in GST Fraud Tracking is quite motivating and intriguing.”

Rajesh Gupta, co-founder and Director, Busy Infotech has also welcomed the budget wholeheartedly. “We are welcoming the decision of laying a special framework of data analytics, machine learning, and artificial intelligence to assist the entire MSME ecosystem and develop them digitally.”

However, he also believes stakeholders hoped for more positive outcomes from the government in tax regimes, digitalisation, cash flow, and easing financing norms for MSMEs.

The government’s plan for setting up a National Language Translation Mission demonstrates its commitment towards machine translation. On this matter, Rakesh Deshmukh, co-founder and CEO of an Indian app and content discovery platform, Indus OS said that “the announcement is a much-needed effort by the government to reach our citizens in the language they understand.”

He believes with an enhanced app store ecosystem, the company will break linguistic barriers and add more value to the next half a billion Indian customers. “Moreover, for Atmanirbhar Bharat to be successful, the focus should be on technology innovation as a whole, and thus we appreciate the government’s focus on innovation and R&D in the budget 2021,” said Rakesh.

Adding to it, Ramesh Mamgain, the Country Manager, India and SAARC, Commvault said the renewed focus on infrastructure would mean accelerated technology adoption, which cannot be accomplished without data privacy measures, propelled by data protection. “This approach would help in strengthening India’s data protection framework to protect individual information, with investments in key technologies like AI and ML to secure cloud-based infrastructures,” said Ramesh.

From the cybersecurity perspective, Sunil Sharma, the Managing Director, Sales, Sophos India & SAARC, said, “The budget is built on the foundation of new technologies which will empower businesses with eConsultation, eScrutiny, and compliance management. This will surely enhance enterprise cybersecurity as AI has immense potential to bring in scalable and effective defences against sophisticated attacks like ransomware.”

That being said, Sharma is also expecting more push on building skilled cybersecurity professionals in the country.

The industry believes the government’s allocation of ₹3,000 crores towards skill development will help reskill India’s youth and, by extension, boost the economy. Surabhi Goel, the CEO of Aditya Birla Education Academy, said the budget has set aside funds to create an opportunity for millennials of India to upskill themselves.

Expressing views on this topic, Krishna Kumar, the founder and CEO of Simplilearn said, “We have witnessed the role of technology taking centre stage, opening new job opportunities and increasing the demand for a technically skilled workforce. The government’s decision of introducing post-education apprenticeship with an aim towards the skilling of engineering graduates and diploma holders is a forward-looking proposition aligned with improving employment opportunities for students pursuing different disciplines.”

The government’s propositions are in line with enabling a technically skilled future workforce, said Prateek Shukla, CEO and co-founder of Masai School. “The government’s investment towards a robust framework which includes the skilling and upskilling of engineering graduates will aid in paving the path in creating a job-ready workforce in the new normal.”

Praveen Tyagi, the founder of STEPapp, said the government understanding the importance of technology in education is immensely going to raise expectations. However, he believes the mindset towards formalising online course development and properly leveraging technology at scale in education is still quite conservative.

On the other hand, Sangeet Kumar, the CEO & co-founder of Addverb Technologies, believes that upskilling programs are required to make the workforce ready to work with robots and other automation. The budget also focused on machine learning-driven programmes and setting up data centre parks to promote R&D.

“Realignment of National Apprenticeship Training Scheme (NATS) and the allocation of ₹3,000 crores will motivate organisations for providing apprenticeship training. Commencing degree and diploma apprenticeships will improve the employability factor for the youth and prepare a productive workforce in the country,” said Sumit Kumar, Vice President at NETAP, TeamLease.

The budget 2021 hasn’t left the startup ecosystem behind. It introduced a host of measures to ease operational requirements for startups. The startup ecosystem is also getting capital gains exemption by one more year to 31 March 2022. Commenting on this, Atul Rai, CEO of Staqu, said,“The proposed extension of tax holiday for startups by one more year, will enhance ease of doing business and encourage the next generation of tech companies to step up and carry the mantle of development towards a digital-first future in line with the PM’s Digital India mission.”

Agreeing to this, Khadim Batti, the CEO and co-founder of Whatfix said, such a move will go a long way in boosting investments in startups and provide greater benefits to employees. “Employees who join startups at various stages of growth bet on them by accepting more equity and less cash in terms of compensation. Due to this, additional benefits concerning ESOP taxation will facilitate a larger flow of skilled talent to startups, as the majority are still attracted to multinationals and large corporations,” said Khadim.

Shubhradeep Nandi, the CEO & Co-Founder, of PiChain Labs, stated that incorporating OPCs without paid-up capital and turnover limitations will allow the startups to grow without compliance challenges and help get into the mainstream quickly.

Such moves have allowed more people to look at starting up, and turning their dreams into reality while solving real-world problems, said Mishu Ahluwalia, COO & Investor Relations at KIWI.

“Recent announcement of the Startup Seed Fund Scheme (SISFS) has already boosted the morale of the startup ecosystem, and we are hopeful for the coming year,” said Sharad Bhatt, CFO, Eolstocks.com.

However, Mitesh Gangar, the co-founder & Director of PlayerzPot Media, said, while the budget is a welcoming step, India’s startups expected a few more tax front reforms and compliance for the ease of doing business.