Can India’s AI Talent Gap Be Stemmed With Government Initiatives? 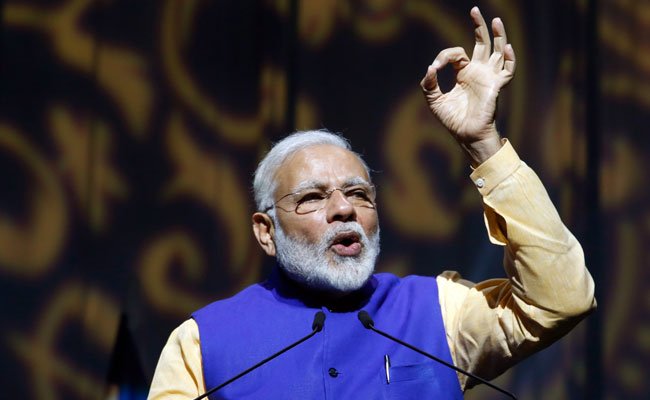 How scarce is AI talent in India? As Artificial Intelligence starts dominating the market, India does stare at a significant talent shortage just like the global market where AI has taken over low-skilled IT jobs. A LinkedIn report on the Digital Workforce Future states that India is like a testing ground for some of the most exciting applications of AI such as Microsoft’s application that helps farmers in predicting crop yields in the agriculture sector, to Google’s Deep Learning application that detects diabetes-related eye diseases in health care.

So, why is it still difficult to plug the talent gap? Even though we already know Artificial Intelligence is an emerging in-demand skill, what we don’t know is the extent of the demand compared with other digital skills and this talent war competition will only intensify in India, cites the LinkedIn study. What works in India Inc’s favour is that the country is an established tech hub and the last year has seen tech forces investing heavily in strengthening their pipeline and hiring talent that has a hybrid set of skills to fill the skill gaps.

Talking about the algorithm economy at his recent book launch, Sameer Dhanrajani, chief strategy officer at Fractal Analytics mentioned how changes on strategic and operational sides can only be underpinned by AI and analytics infusion. “The agenda of talent development, research and education in AI, analytics and emerging technologies is critical for building and benchmarking the future skills and workforce of India,” he said. Wiley, the global publishing powerhouse has set up an initiative to work closely with industry and academia think tank, to provide a global platform for building research, training and certification framework, curriculum, exchange of knowledge and best practices in emerging technologies.

The numbers paint a dismal picture

Let’s dig into the numbers – an earlier news report cited Bangalore-based recruitment startup Belong that provides data-based hiring decisions, that only 4 per cent of AI professionals in India have actually worked on next-gen technologies such as deep learning and neural networks. Neural networks are the building blocks of advanced AI -based solutions and hiring companies require candidates with PhD degrees in AI- related technologies, which is extremely rare. The Belong research also noted that less than 2% of professionals in the data science field, who pegged themselves as data scientists or data engineers have a PhD in AI-related technologies.

Also, an earlier Kelly OCG India reported that India would see a 60% rise in the demand for AI and ML professionals by 2018. So, this scenario begets the question – how can companies overcome the AI talent crunch? Given the acute shortage of AI talent, companies have switched to acqui-hiring mode to get talent onboard. Another strategy employed by enterprise is to strengthen their pool of Data Science/Engineering mentors who can lay down a framework to develop talent.

Addressing the problem at root level with colleges embracing change

India’s engineering institutions aren’t well-equipped to meet the talent demand. Besides top institutes like IIT Kanpur, IIT-Delhi, IIT KGP and even IIIT Hyderabad, India’s engineering colleges have failed to revamp their curriculum as per industry demand. Ramesh Loganathan from IIIT-H highlighted that IIIT-H has the largest AI research lab cluster in the country and the institute also has extremely strong (ranking) research labs and faculty in NLP/info extraction/translations, video & image analytics/computer vision, Machine Learning, Robotics and Cognitive sciences. “In many respects we would probably be among the top two or three institutions for science in the country, especially in all aspects of AI and ML,” he noted. 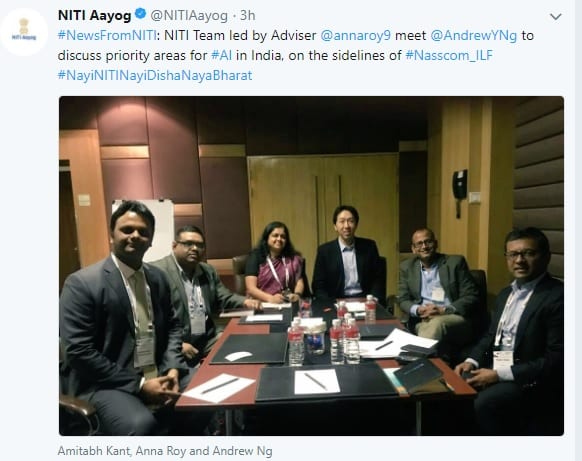 The Modi-led government are taking a lot of concrete steps to develop Sustainable Development Goals (SDGs) with the help of AI by 2030. Industry insiders are happy to see that the current Modi government is working to support a tech-driven future. There have been a spate of announcements in the last year and this year’s Union Budget to consolidate India’s position on the global AI map. This year, Union Finance Minister Arun Jaitley has also doubled the allocation on Digital India programme to ₹3,073 crore in 2018-19.

Niti Aayog: Amitabh Kant led Niti Aayog’s commitment to develop an AI framework for India is laudable and the committee and the Indian think tank has been directed to set up a national program to further research and development in next-generation technologies such as machine learning, artificial intelligence and others which are the technologies of the future. The India Government is mulling setting up Centre of Excellence in fields such as AI, big data. From creating high-quality jobs to saving jobs from automation, Nit Aayog has its task cut out. This is great news, as it underscores the Government’s vision to invest in new-age technologies. On the sidelines of Nasscom ILF 2018, AI supremo Andrew Ng is visiting India to discuss priority areas for AI in India. 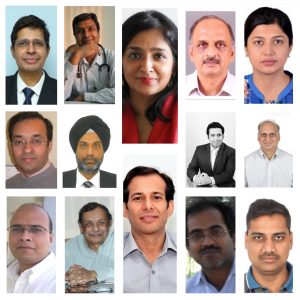 AI task force: The first-of-its-kind in took a cue from global developments and set up a Task Force on Artificial Intelligence (AI) to drive economic agenda in August. According to PIB, the Commerce and Industry Ministry led by Nirmala Sitharaman set up an AI Task Force last year to accelerate rapid development in the fields of information technology and hardware. The 18-member task force that comprises researchers, academics, experts and industry leaders is headed by IIT Madras’s Dr V Kamakoti.

Companies like Google & Microsoft are developing an AI ecosystem in India: From in-house training programs to improving solution performances Google and Microsoft are using India as a testbed for launching AI-based applications and are also taking a number of initiatives to boost AI talent with training programs.