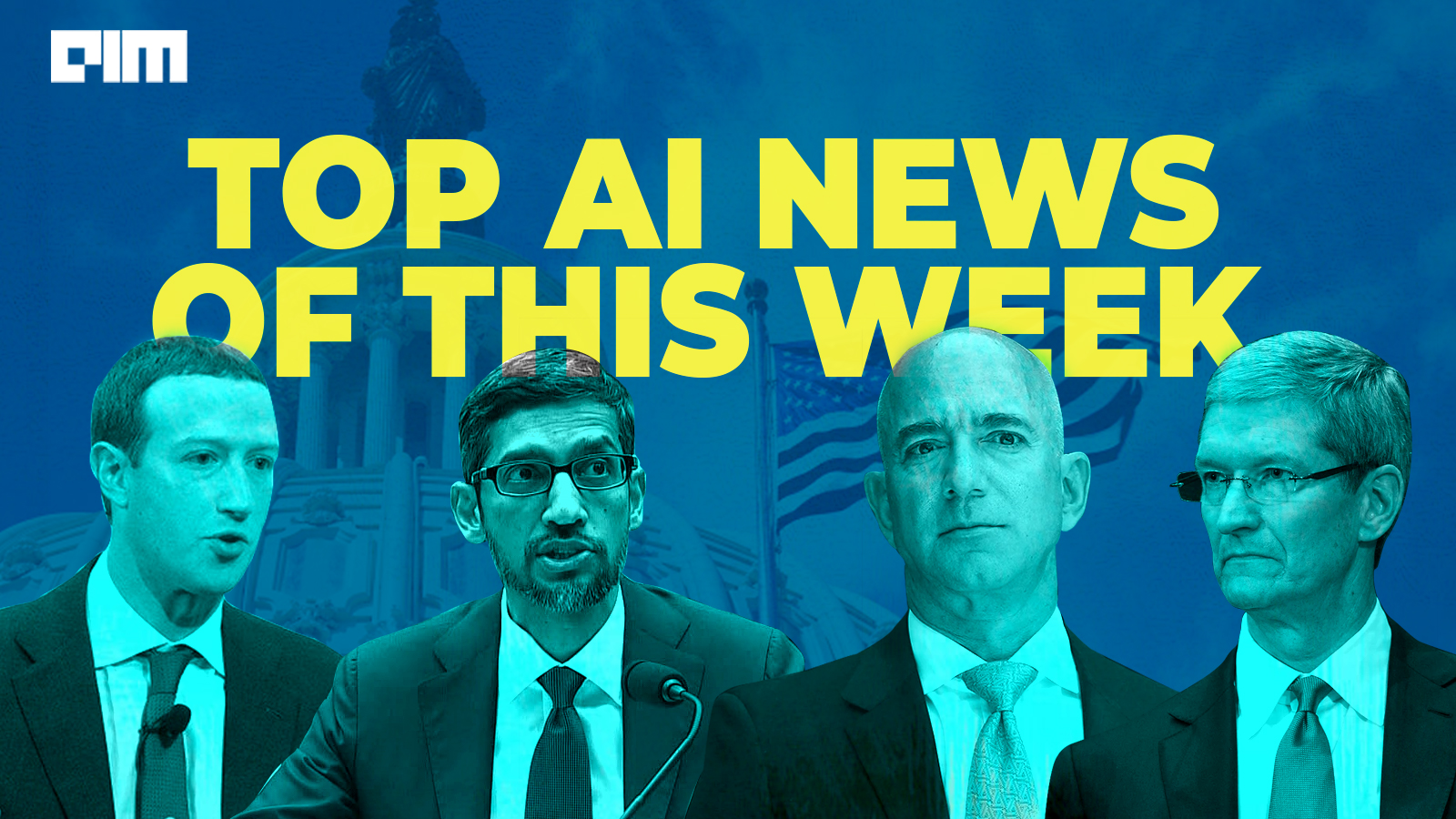 This has been a tough week for the tech giants. Amidst quarterly earning postings and legal turmoils, the top companies have somehow managed to serve the community with some interesting updates and releases of their products. Take a look at all the top news that has happened over this week.

Microsoft Puts An End To Its 25-Year-Old Algorithm

On Tuesday, Microsoft announced that it would be discontinuing Secure Hash Algorithm 1 SHA-1,  from the Microsoft Download Center on August 3, 2020. SHA-1 is a legacy cryptographic hash algorithm that is no longer considered to be secure. So, Microsoft is asking its users to move to a currently supported version of Windows and to more robust alternatives, such as SHA-2.

In a first, the top court in the US asked the CEOs of Amazon, Apple, Facebook, and Google to testify on the same day regarding unfair competition. This is the first time Jeff Bezos had accepted to testify. This hearing is a result of a subcommittee’s 13-month probe into antitrust issues of the tech companies. The hearing, which was conducted virtually had Sundar Pichai, Mark Zuckerberg, Jeff Bezos and Tim Cook in a tight spot.

“Simply put, they have too much power.”

The hearing saw the CEOs, reminding the Congress of all the good deeds they have been doing. Zuckerberg explained how his company is battling misinformation on their platform and how they have been successful in curbing the bad content. Whereas, the Google Chief Sundar Pichai underlined Google’s commitment to the government through various contracts with the defence department. Jeff Bezos, who is a first-timer, eloquently, listed the numbers that Amazon has put up. Right from the funds allocated to frontline workers to the number of indirect jobs they have created, Bezos quickly got down to business. These statements and the follow-up discussion by the top CEOs will determine future decisions of the Congress where the plans of breaking up monopolies have been doing the rounds for a while.

According to reports, Facebook is suing EU antitrust regulators for seeking ‘predominantly irrelevant’ documents that include highly sensitive personal information, such as employees’ medical information, personal financial documents and information which has got nothing to do with the Commission’s investigation. Ever since the launch of its marketplace in 2016, FB has provided 315,000 documents equivalent to 1.7 million pages to the Commission. Now, FB has turned the tables in the EU, which has put the company under scrutiny for marketplace practices.

According to a preliminary study by the National Institute of Standards and Technology (NIST) , 89 of the best commercial facial recognition algorithms reportedly erred when they encountered masked images. For their experiments, the US government agency fed the algorithms which were trained before the pandemic with pictures of the same masked people. The drop in performance of widely used algorithms indicates that the facial recognition systems can indeed be fooled. This raises the question, what if these systems, which are installed in critical areas such as airport security, will malfunction and misidentify people? This is an ongoing survey, and more results will be reported in phases. Read more here.

NVIDIA And Google Tussle For Supremacy

This week, both NVIDIA and Google Cloud flaunted their MLPerf results quite vigorously. If NVIDIA claimed to have set six new records for AI performance, then Google claimed to have broken the performance records with the world’s fastest training supercomputer. Here are a few results of their performances:

Google claims that all of the above MLPerf submissions trained from scratch in 33 seconds or faster on Google’s new ML supercomputer.

NVIDIA claims the above results on a single node using DGX-2H – Dual-Socket Xeon Platinum 8174, 1.5TB system RAM, 16 x 32 GB Tesla V100 SXM-3 GPUs connected via NVSwitch. For results on the scale, check this. Whereas, most of the TPU’s performance can be attributed to their version 4, which is yet to be released to the public.

Know how ML Perf is revolutionising the industry here.

Python And PyTorch Get New Releases

Python announced new features as part of their 3.9 in beta version (3.9.0b3). In their latest release, the world’s most sought language has made significant changes. They even ditched a few of their old methods due to deprecated use. Now developers can avail the new merging method, along with new string methods and other updated modules. Know more here.

In other news, Facebook too has announced the availability of PyTorch 1.6, the latest version. They have also announced that Microsoft will be taking ownership of the development and maintenance of the PyTorch to build for Windows. Read more here.

According to reports, Google’s wearable dreams might have to wait as the company’s $2.1 billion bid for Fitbit will now face a full-scale antitrust investigation by the EU. This probe is targeted to explore how Google will use personal healthcare data. This decision by the EU has put Google’s plans of taking over Apple and Samsung in the fitness-tracking and smartwatch market, alongside others including Huawei and Xiaomi to a hold.

Over the past year, Google has launched Model Cards to enable machine learning model transparency. However, creating a Model Card takes substantial time and effort. So, now, Google AI is introducing a new tool for model transparency, Model Card Toolkit, which will provide a structured framework for reporting on ML model provenance, usage, and ethics-informed evaluation and give a detailed overview of a model’s suggested uses and limitations that can benefit developers, regulators, and downstream users alike. Know more here.

On Wednesday, Cisco released an official statement summarising the details about their findings related to a vulnerability in the REST API of Cisco Data Center Network Manager (DCNM). This vulnerability, stated the company, could allow an unauthenticated, remote attacker to bypass authentication and execute arbitrary actions with administrative privileges on an affected device.

“The vulnerability exists because different installations share a static encryption key. An attacker could exploit this vulnerability by using the static key to craft a valid session token. A successful exploit could allow the attacker to perform arbitrary actions through the REST API with administrative privileges,” said Cisco in a statement.