ChatGPT is Great, but Competing with Google Takes More than That

Meanwhile, it’s being claimed that Google has invoked Code Red over the rising popularity of ChatGPT and the threat to Google's ad revenues 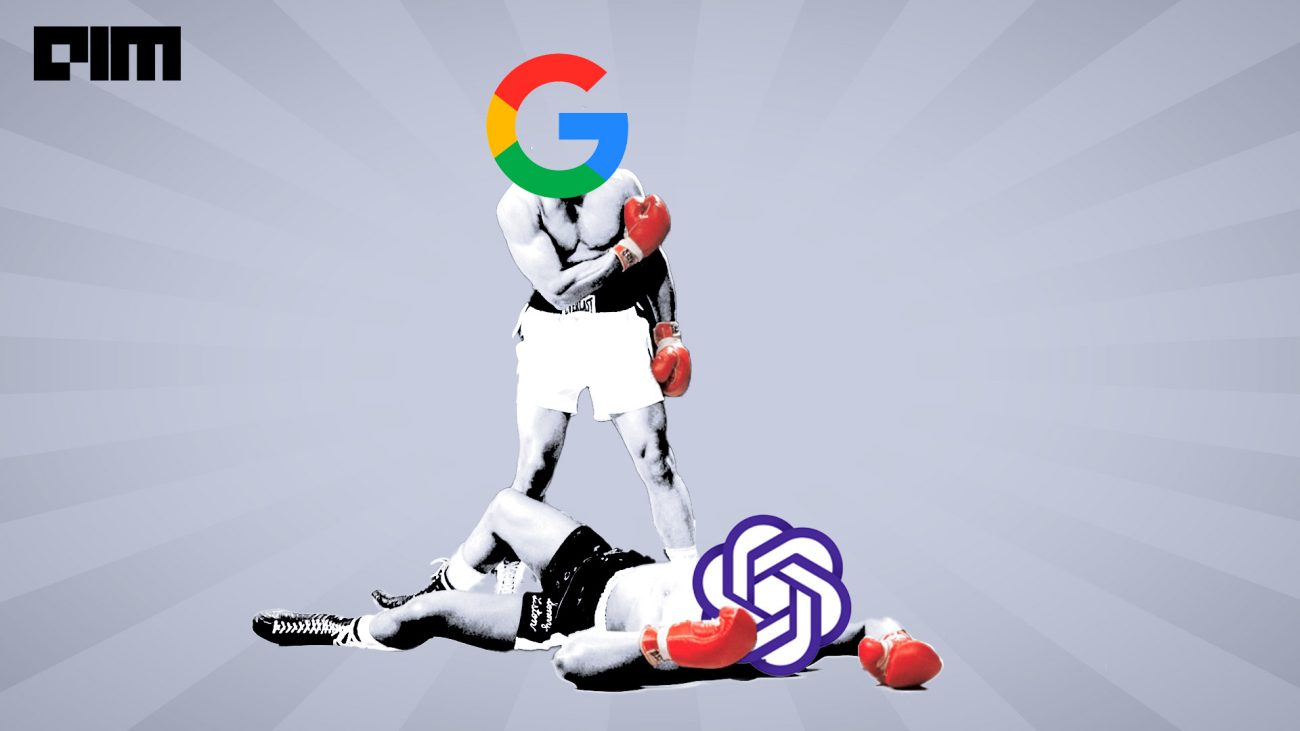 Before the release of ChatGPT, Zoubin Ghahramani, the person in charge of Google’s AI lab Google Brain, had told The New York Times that chatbots are not something that people can use reliably on a daily basis. This statement in particular, did not age well. Fast forward a couple of weeks, and now the world is talking about ChatGPT.

In such a short time span, ChatGPT, even with its limitations, has become one of the most-used LLM chatbots globally. So much so that many researchers believe it can replace Wikipedia, if not Google, in the coming days. Mark Bishop, chief scientific adviser, FACT360, believes that it can “increase the chances of potential for nonsense promulgation, or simple Machiavellian mischief – as more and more learn to game the system – is already writ large ‘on the subway walls’.”

A number of news outlets claim that as per an internal memo and audio recordings examined by NYT, Google is now worried about ChatGPT. Sundar Pichai, CEO of Alphabet, the parent company of Google, is rumoured to have convened meetings concerning the firm’s AI strategy and given orders to various teams to focus their efforts on resolving the possible threat that ChatGPT poses to Google’s search engine business.

According to multiple reports, a Google executive who the NYT spoke to but did not identify, said that AI chatbots like ChatGPT could completely change the way the search engine giant does business, which is highly dependent on the adverts and e-commerce found in Google Search.

However, Blake Lemoine, the developer fired by Google a few months ago for claiming that Google’s chatbot LAMDA had become sentient, claims that Google is still a few years ahead of ChatGPT. “I love how people are talking about ChatGPT replacing Google while Google just quietly uses a more advanced dialogue system behind the scenes. ChatGPT is a big step in the right direction but they’re still a few years behind Google,” he tweeted.

What is Code Red?

As per a post from 2012, Google has a red t-shirt with “Code Red” imprinted on it locked in a glass shelf. The image was uploaded by then Google+ user Richard Hay, who claimed that Code Red simply means “all hands on deck”. He also explained that there is also a Code Yellow, which means “it is ok to go home and sleep and stuff but it is still a serious situation”.

A decade later, in 2022, it’s being claimed that Google has invoked Code Red over the rising popularity of ChatGPT and the threat on ad revenues of Google. As per Sridhar Ramaswamy, who oversaw Google’s ad team between 2013 and 2018, ChatGPT could prevent users from clicking on Google links with ads, which generated $208 billion — 81% of Alphabet’s overall revenue — in 2021.

And ChatGPT can really disrupt Google’s ad revenue, if it is what people claim it is.

Google is way ahead

The giant has been working on many LLM projects even before ChatGPT was launched. According to what Andrew Moore, the Google Cloud VP and general manager of AI and Industry Solutions, said in one of the Google’s blog, “If computer systems become more conversant with natural human languages, they become a foundation for more sophisticated use cases, able to not only understand user intent but also create complex bespoke solutions.”

In the space, Google has been working on various LLM projects like LaMDA, PaLM and T5 which as per Google, has contributed to the Cloud NL API’s improved v2 classification model.

LaMDA for example, if compared with ChatGPT, is yet to improve on many fronts. While the responses on ChatGPT reads more or less like a Q&A platform, LaMDA turns more conversational, leading to better user experience. This further can be correlated with LaMDA being trained on dialogues while ChatGPT is claimed to be trained on web texts.

Google’s project is larger than any LLM project ever

The one direction where it’ll be heavily used, would be the Google search, but again, it’ll not be the only one. The initiative is said to creating a single system which will have a huge knowledge base about the world’s languages. As per Zoubin Ghahramani, vice president of research at Google AI, “Languages are like organisms, they’ve evolved from one another and they have certain similarities. And we can find some pretty spectacular advances in what we call zero-shot learning when we incorporate data from a new language into our 1,000 language model and get the ability to translate [what it’s learned] from a high-resource language to a low-resource language.”

In a tweet, Margaret Mitchell, an AI researcher based out of Seattle, pointed out that ChatGPT taking over Google search would be the same as reinventing the wheel. According to her, if we see the search engines before the emergence of Pagerank, a web search query meant putting in a sequence of text as a query, and getting back websites with the most likely sequences of text following your query. This, according to her, is “similar to where we are with ChatGPT today. Except, the websites are erased; you get snippets of likely response text extracted from different websites”.

With Pagerank, however, the websites started to get ranked based on how many web pages link the website. The most linked sites are the ones people tend to want. As per Mitchell, “Crudely, what this means is that ChatGPT is in a stage that’s similar to the early days of web search: Yes, it can give a lot of information, no there is not a great match between what you want and useful or reliable results.”