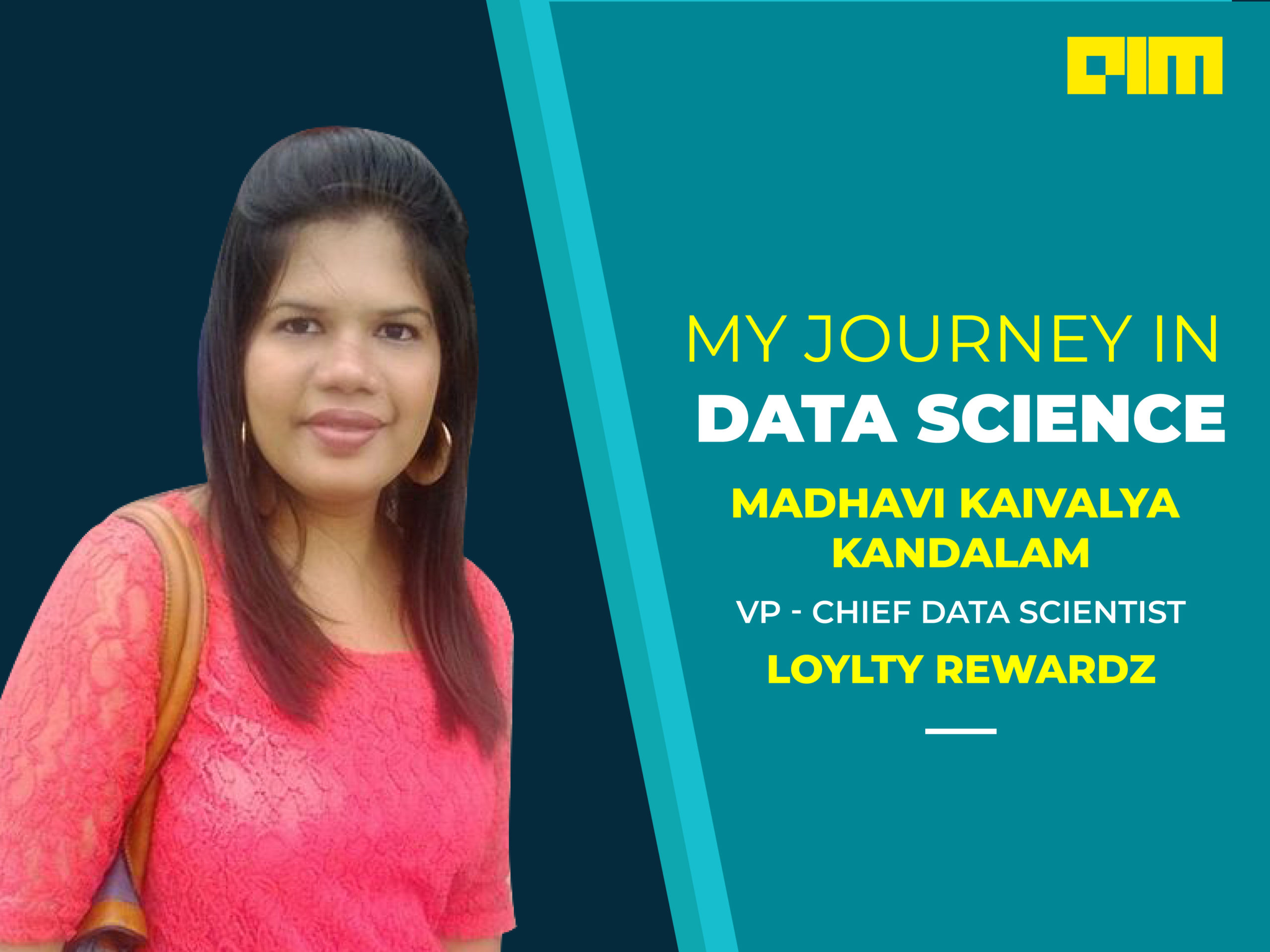 Analytics India Magazine got in touch with Madhavi Kaivalya Kandalam, VP – Chief Data Scientist of Loylty Rewardz, for our weekly column My Journey In Data Science. Madhavi has over 10 plus years of experience in the data science domain while working for Mu Sigma and Loylty Rewardz. In coming years, she wants to start her business in the AI space to create a social impact using the latest technologies.

Madhavi completed her B.Tech from NIT, Warangal in 2010, majoring in biotechnology. She chose biotech initially out of interest, but growth prospects appeared less at the time. This led to the thought of moving towards a different career path. “Analytics seemed like a good option as it was a new field, which did not demand any formal degree back then and growth prospects seemed very promising,” says Madhavi. “The first time I heard about analytics was during the pre-placement talk given by Mu Sigma, and I fell in love with the field. If one looks at the amount of data humanity has produced in the last decade is enough to figure out this field has a golden future.”

After joining Mu Sigma as a Business Analyst, Madhavi learnt about SAS, VBA, and other analytics skills. She learnt these tools and techniques through internal training of the company, however, Madhavi said that the most helpful was the learnings on solving unstructured problems. “Over the years, tools like SAS and VBA have become irrelevant, but the challenges in analysing unstructured problems have remained constant,” says Madhavi.

Talking about the difficulty in preparing in the everchanging data science landscape, Madhavi said that learning in data science can be overwhelming at times, the most sought after tool today will become irrelevant a year down the line. But, that is also the most exciting part of the field.

Unlike most, Madhavi never focused on certifications. She believed in learning through real-world applications. While working on projects, she analysed what kind of tools and techniques were required to solve, and then learnt those by implementing and evaluating the results. In addition, she also read research papers to learn new technologies that could assist here to effectively solve business problems.

Even after continuous learning, Madhavi said the data science field is vast, which makes her feel that she hardly knows anything. Madhavi believes constant learning and reading is the only way to survive in the field.

In her data science journey, Madhavi has been involved in numerous successful projects. However, one of her favourites is when she led a team to create backend algorithms for selecting target customers for small scale retailers through a mobile application. They were running on tight timelines but managed to create 20 plus customer segments with sparse data and enrich it through look-alike models.

Besides, while recollecting here worse data science experience, Madhavi said that organisations find it difficult to understand the data science functions. She feels that it is difficult to convey the limitations and challenges of the domain — what is possible and what is not. There are a lot of misconceptions around this domain, and it creates a huge communication gap. “A lot of business decision making regarding the data science function is short-sighted. Convincing organisations on the importance of investing in long-term goals is challenging,” explains Madhavi. “Maintaining good quality data is essential for businesses to thrive, but organisations fail to understand its importance mostly because they have a short-term goal, where the importance of quality of data is usually ignored. The single largest differentiator between organisations that have leveraged data science successfully in comparison to those that have not is the quality data maintenance and procurement. I think the Indian market is still not mature on this,” she added.

After working for Mu Sigma for more than three years, Madhavi joined Loylty Rewardz in 2014. At Loylty Rewardz, Madhavi was exposed to a colossal amount of data related to 800 million customers. Implementing machine learning and other data science techniques to understand how customers behave, purchase and more, further excited here about the field.

Today, Madhavi leads a 25 membered team that is responsible for driving customer engagement, delivering insights and strategy for B2B clients, and creating/enhancing data-based products and platforms. One of the most challenging parts of her job is to communicate about the functions with business stakeholders in a language that is palatable to everyone. But, she has mastered it over the years to communicate effectively.

As a part of her job role, Madhavi also hires data scientists and usually does not focus on the types of certifications they have done. Instead, she evaluates based on the practical experience, openness to learning new tools, and internal tests, where she assess programming skills, machine learning techniques, and application through a live problem involving real-world datasets.

As a piece of advice to aspirants, Madhavi said that aspirants should start with Python and SQL as most of the organisations use these tools, but at the same time, practitioners should not be fixated on the technology they love. Come to the field for what it has to offer and be open to working with different things continuously. Besides, she believes one should not get disheartened by rejections in interviews and continue to improve. “I think a little flexibility on the kind of work and responsibilities, which one is willing to take up help as corporates tend to look for generalists,” concludes Madhavi.