Current State of Robots At The Data Centers 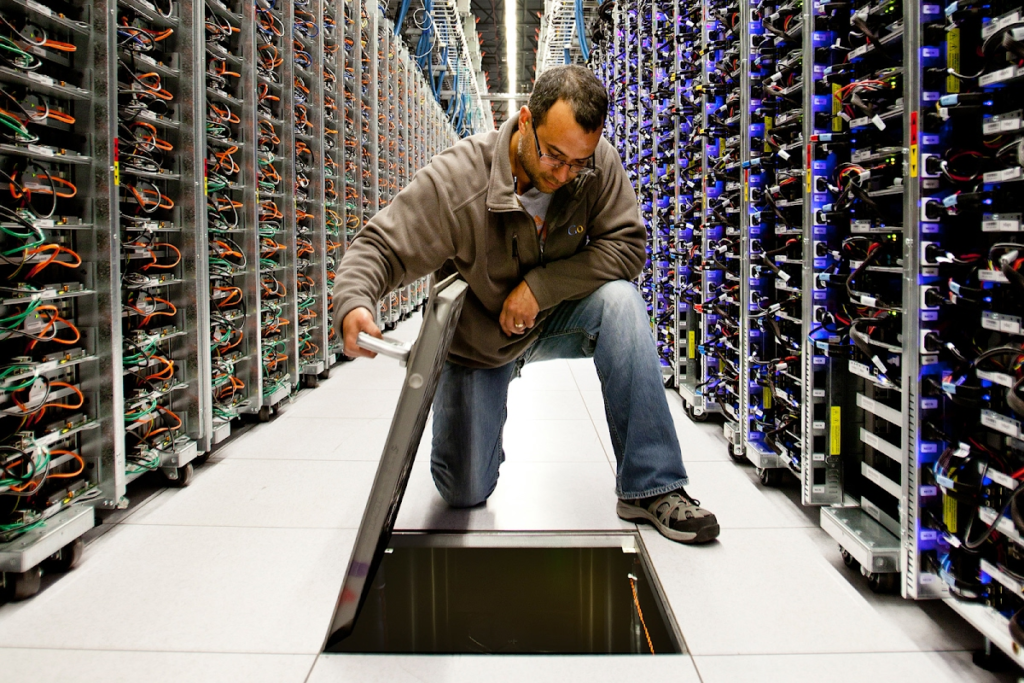 Data centers are labyrinths of server racks powering most of the internet. Hyperscale data centers take up large floor space and the data center staff have a lot of things to take care of such as checking server tags, room temperature, underground coolant pipes etc. As many as 541 hyperscale data-center facilities exist in the world, as of July 2020.

Data center’s maze-like structure is ideal for warehouse robotics. For example, Equinix, which has more than 100 data centers world-wide, is adding 86,000 square feet (about 8,000 square meters) of space to one of its campuses, reaching the size of more than six football fields. Think of a robot with an extended arm that can move around tirelessly checking for faulty drives and replacing them from the racks.

Last year’s pandemic has forced workers to go remote or ensure social distancing at the workplace, both of which can be challenging at a data center.

Robots at data centers are not a new idea. But, it took a pandmeic to accelerate the adoption of robots into data center operations. According to Data Center Dynamics, the pandemic has forced the operators to explore automated alternatives to replace human workers.

In 2011, Korea Advanced Institute of Science and Technology developed SCOUT, a robot that inspected servers by following the NFC tags. In 2013, IBM launched a robot for checking temperature at data centers. The project was later dropped. However, between 2014 and 2018, companies like Facebook and Google have ramped up their robotics capabilities at data centers.

Big tech’s robot deployment plans date back to 2013. For instance, Facebook engineers built such robots in 2014, according to Wired: The pick and place robots could move up and down and side to side. Moreover, it works without human intervention. There are also a few rumored rail-based robots at these companies, capable of covering the entire data center.

According to Joe Kava, Google VP of data centers, hyperscale data centers are more like warehouses and most of the processes require a robot to navigate to a specific location to perform a task. The horizontal occupation of these giant computers is a real estate issue. Thanks to robots, data centers can also think of scaling in vertical direction as well.

Robots can be even used to tie hard drives with RFIDs. The drives can be easily located, shifted and replaced by robots in no time by using this tagging technique. Already, Google uses the same technique in data centers where tape archives are located and retrieved for backup from tapes by robotic arms.

NVIDIA’s Kao Data Centre in Harlow, UK, has developed telepresence robots that run on NVIDIA’s Jetson GPU with Arm cores. In an interview with DCD, Mark Hamilton of NVIDIA said they would “absolutely” use these innovations post-Covid. “It just makes it easier for the specialists to not have to be co-located,” said Hamilton. Meanwhile, a company called Wave2Wave has developed a robotic optical fiber switch for automating fiber deployments. The robot can gather the data of position of ports within the chassis, and can manage cables and slack with precision.

A typical data center would have layered security measures. Data centers are constantly under video surveillance (overseen by trained security personnel who also conduct routine patrols). However, this whole routine was brought to a standstill during the pandemic, urging the data centers to look for unmanned alternatives.

Data center company Switch has come up with a security robot called SENTRY – a fully autonomous security system that can navigate on its own, record, and assess its environment. SENTRY is a 250lb machine with 360-degree cameras, heat sensors to scan visitors’ temperature and more. It can climb curbs and stairs, allowing it to monitor both inside and outside of the data center. It can also recognize a car’s license plate.

In an interview with data center frontier, Scott Noteboom, a data center expert, said robots can create a data center environment completely optimized for machines, with no humans involved. He has developed AI agents that can listen to the sound of generators for anomalies.

At TMGcore,  a robotic arm is designed to lift servers and replace them with backup servers.

The biggest business driver to deploying robotics in the data center is the need for greater levels of efficiency. In 2018, Google rolled out a hard-drive-destroying-robot, essentially a stationary industrial arm to pick up the drives and put them in the shredder. But, this robot was not considered safe to remove drives from the server racks. Alibaba then claimed to have developed a better version in the form of Tianxun, an AI powered robot that can replace faulty hard drives.

With robots on the march, are human jobs under threat? The advent of automation rendered many jobs obsolete. But it did open up new careers. Similarly, data centers would still need human supervision for maintaining the robots no matter how advanced they have become. There are also plans for lights out data centers that can run without humans. Robots for data centers should be looked at more as an augmentation for a data center expert’s repertoire. Exactly why it is critical to deploy robotics only in the right kinds of use-cases.

Then there is the issue of safety. Earlier, a former Google data center worker was pinned to the wall by Google’s automated machine built for lifting heavy battery racks. Google, later, had to shelve the project. Robots show a tendency to deviate from the stipulated task when deployed in the real world. Ipso facto, a harmless, non-intrusive and high performing data center robot remains a distant dream.

With the proliferation of edge computing, lights out data centers or unmanned centers will become a necessity. And, robotics is poised to play a major role in the future of data centers.

Further, Cambridge-1 data center is designed to accommodate robots of the future. Unmanned data centers can deploy really small robots to carry out tasks. Experts forecast that we can even have cylindrical data centers sitting between buildings that can still function in a high temperature and at low oxygen levels.