Curse Of Dimensionality And What Beginners Should Do To Overcome It

The Curse of Dimensionality is termed by mathematician R. Bellman in his book “Dynamic Programming” in 1957. According to him, the curse of dimensionality is the problem caused by the exponential increase in volume associated with adding extra dimensions to Euclidean space.

The curse of dimensionality basically means that the error increases with the increase in the number of features. It refers to the fact that algorithms are harder to design in high dimensions and often have a running time exponential in the dimensions. A higher number of dimensions theoretically allow more information to be stored, but practically it rarely helps due to the higher possibility of noise and redundancy in the real-world data.

Gathering a huge number of data may lead to the dimensionality problem where highly noisy dimensions with fewer pieces of information and without significant benefit can be obtained due to the large data. The exploding nature of spatial volume is at the forefront is the reason for the curse of dimensionality.

The difficulty in analysing high-dimensional data results from the conjunction of two effects.

The difficulty is that those tools are also used when data are high-dimensional and more complex and hence, there is a probability to lose the intuition of the behavior of the tool and thus drawing incorrect conclusions.

Some of the domains of the curse of dimensionality are discussed below.

Anomalies in high-dimensional data may show a significant number of attributes which are irrelevant in nature, different subspaces produce incomparable scores, given the large search space, for every desired significance a hypothesis can be found, certain objects occur more frequently in neighbor lists than others, etc.

Here the curse of dimensionality occurs when the complexity increases rapidly which is caused by the increasing number of possible combinations of inputs.

One of the key ingredients in the successful development of learning algorithms is to have enough data for learning so that they fill the space or part of the space where the model must be valid. An increase in the dimensionality in data results in the sparsification of data and this exponential increase is the first consequence of what is called the curse of dimensionality.

How To Combat The CoD 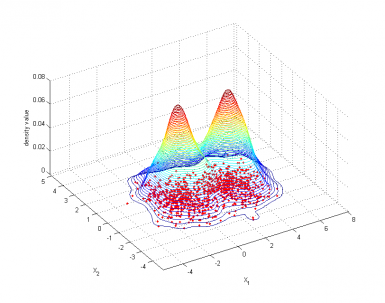 The problem of curse of dimensionality comes from that parameter estimates which are unstable, hence, regularising these estimates will help that the parameters to make correct estimation.

PCA (Principal Component Analysis) is one of the most traditional tools used for dimension reduction. It transforms the data into the most informative space, thereby allowing the use of lesser dimensions which are almost as informative as the original data. But since it is a linear tool, nonlinear relations between the components of the initial data may be lost in the preprocessing.