Siraj Raval, the poster child of quick, quirky AI educational videos is in a Twitter maelstrom and it’s not over a gaffe. The YouTube sensation, better known for gamifying AI education has been caught in a plagiarism scandal. San Francisco Bay-based Raval, Founder and Director of School of AI, has received widespread criticism from all quarters over his quantum research paper which has been taken down.

His paper titled The Neural Qubit (he’s taken it down now) with Fraud Detection as an example, was found to be almost 90% plagiarised. It was first found out by Andrew M Webb — a research associate in the computer science department at the University of Manchester.

According to Webb’s official page, he’s currently working on the LAMBDA project and studying methods of training deep neural network ensembles for regression and classification.Webb found that parts of the paper are plagiarised from Nathan Killoran, Seth Lloyd, and co-authors. Interestingly, the parts that aren’t plagiarised from Killoran et al. are taken from this paper by Wang et al. You can check Wang’s paper on Simulating Cognition with Quantum Computers here. 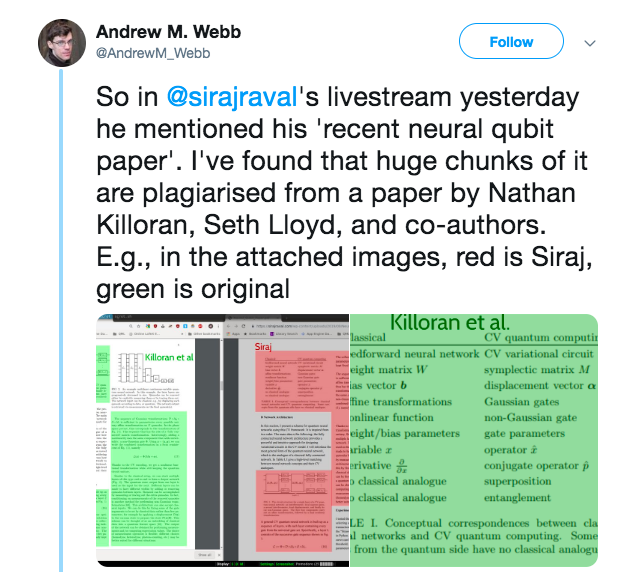 I’ve seen claims that my Neural Qubit paper was partly plagiarized. This is true & I apologize. I made the vid & paper in 1 week to align w/ my “2 vids/week” schedule. I hoped to inspire others to research. Moving forward, I’ll slow down & being more thoughtful about my output

It is a known fact that quantum research takes years. Raval’s contribution has been paraphrasing technical terms “quantum gate” and “complex Hilbert space” to “quantum door” and “complicated Hilbert space” in the plagiarised version, Webb shared. However, the best response came from Tanmay Naik who tweeted.

The amount of effort put into this tweet is the same as your Neural Qubit paper, lol

The ongoing Twitter storm has also cast doubts on his School of AI. Known as the Instagram influencer of data science, Raval’s reputation as an AI instructor has taken a hit and this could mean a potential loss of support from the AI research community. Not long ago, Raval also advised students on “How to Write A Research Paper”. Looks like he wasn’t following his own advice.

It is undoubtedly true that plagiarising research is harmful in the AI community and discredits researchers who spend years working hard to produce cutting-edge work and meet conference submission deadlines. As an instructor, one has the onus of pushing the boundaries of AI rather than stooping to tricks like plagiarism which will eventually erode one’s credibility. Across the globe, academic institutes have zero tolerance for such misconduct. Raval’s paper seriously undermines the efforts of AI researchers and majorly impacts the future of AI. His attempt has also discredited his image as an influencer.

But we can’t forget that through his School of AI, Raval has also contributed to AI education and has been a motivation to thousands of students across the globe. In the last four years, Raval has been producing a steady stream of AI educational videos in a quirky fashion that skyrocketed his personality but also ensured AI education reached the masses. It’s true that it takes years to build a brand and blunders like these can affect the credibility, but one can’t brush away Raval’s contributions to AI education and inspiring a league of young students to enter STEM.

So far, AI research scandals had been concentrated in China with Chinese universities struggling with academic plagiarism. In 2017, MIT report uncovered China’s cash for publication policy which raised eyebrows in the West. This latest incident could potentially spark off another debate on academic dishonesty in the West and what are some of the red flags researchers should watch out for.

In closing, let’s hope Raval recovers from this latest scandal.