Data Science Is Not About Certifications But The Mindset, Says Head Of Analytics At Swiggy 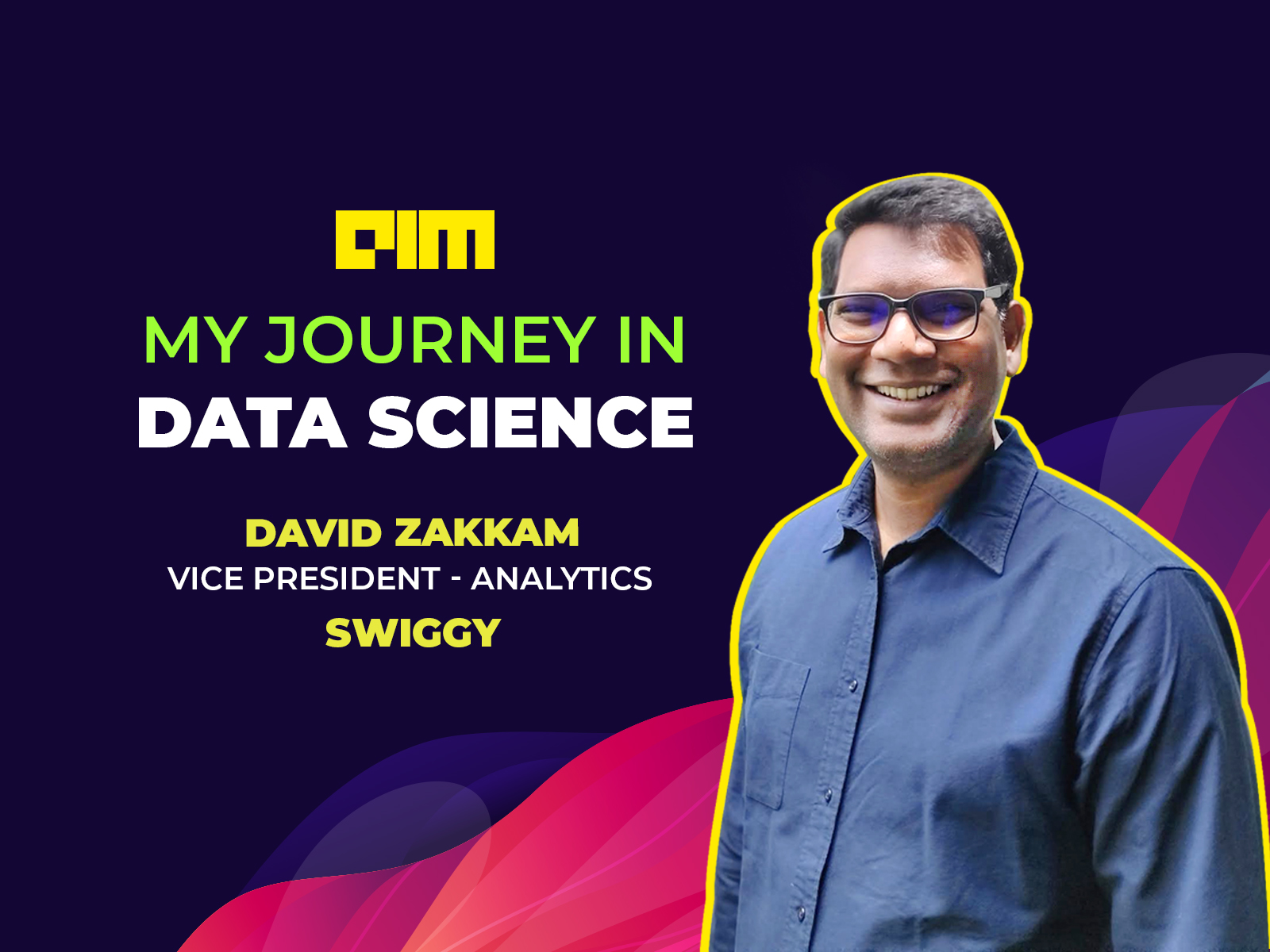 David graduated from IIT Delhi in 2001 after getting a dual degree in Biochemical Engineering and Biotechnology. He then joined Connexios Life Sciences as a scientist where David was involved in creating algorithms that could be used for designing drugs. Since he was good at mathematics, science, and programming languages, he used to develop algorithms that simulate human bodies on a computer to analyse and test the effects of various compounds. This enabled the company to prioritise compounds before they went for lab or human trials. “I started my career in algorithms and intelligence, and worked in the field for three years. Then, I pursued my MBA from IIM Calcutta and graduated in 2006,” says David.

After his MBA, David worked for Intel as a business development manager for one year and seven months but realised that he wanted to work in intellectually stimulating fields like marketing, media and analytics. However, it was only after joining Mu Sigma in 2008, that he fell in love with analytics.

While developing algorithms for drugs, David was proficient in Java and C++, however, for analytics, he had to learn numerous tools and techniques which were used to extract insights from data. He mostly relied on Mu Sigma University — an initiative of the company to train its employees. “It was a free classroom training for employees where I learned about analytics but also completed several courses on Coursera to enhance my analytical skills,” explains David.

However, David believes that the best way to learn data science is while working on real-world business problems. Consequently, he suggests aspirants to learn theory and mathematics behind the techniques from online courses, and then work on real-world data as it would require data-wrangling, which is essential for data scientists as a lot of work goes into feature engineering and data cleaning. Then, work on real-world problems; usually, data science practitioners believe that building machine learning models is the end goal. But, David said that data science goes beyond just building models. It requires compelling storytelling skills — converting the mathematical knowledge into English — for communicating the benefits to stakeholders and operationalising models. Eventually, monitoring and analysing the benefits of the implementation to assimilate the impact is what makes a complete data science life cycle.

David utilised his network to get a referral at Mu Sigma. One of his friends was working at Mu Sigma, who forwarded his resume to the HR. “Back in 2008, companies had to hire and create talent through internal training. For people like me who were unfamiliar with the field and wanted to get in, it was a great opportunity to start the analytics journey where the company provided the training,” says David.

The interview was focused on three broad areas: quantitative ability, domain knowledge, and cultural fitment. Along with the positive attitude, the ability to develop algorithms in previous jobs helped David in showcasing his expertise to get the job.

Talking about the rejection, David said he did not face too many rejections as he used to go well prepared for interviews. But, he believes rejections are companies’ feeling that it is not the right match. As a recruiter himself, David said that interviewers are subjective and denials should not be taken as a reflection of one’s potential or performance.

David has been a part of numerous successful projects, but he shared his experience of a project that he was involved in 2010 for helping a search engine company. Since the organisation had entered into a new business — search engine — they had a lot of issues that were leading to revenue loss. As a consultant, David assisted the company in reducing revenue loss by implementing predictive models. He, along with the team, identified 15 metrics by creating a ‘profit tree’ that would break the profit into different parameters across different levels. It was then used to compare several variables’ — actual vs predicted units — to forecast the potential change quickly. Based on the severity of the output, the team that was monitoring the systems were notified. This helped them in quickly identifying and diagnosing issues. “The project was a combination of business knowledge, predictive analysis, inquisitive analysis, structured problem solving, business process reengineering, and global delivery. But, most importantly, it had a huge impact on the business,” says David.

On the other hand, David’s worst experience in data science is when he made a presentation to a client by demonstrating that using deep learning he, along with his team, solved their business problems. However, he later realised that the 98% classification accuracy that his team claimed was flawed — the dependent and independent variables were ending up the same due to a bug in a library. Initially, when the team communicated the breakthrough — 98% — accuracy, David was critical of the result, but his team assured that the model was correct. Nevertheless, he says everything is a learning experience, and one should use it to avoid mistakes in future and keep improving the team’s outputs.

“As a head of analytics at Swiggy, I am thrilled by the ability to provide data-driven recommendations to a company that runs on insights extracted from a colossal amount of information. The business runs at a huge scale, and at the same time, it is extremely hyperlocal. The complexities of such a business are enormous. The role also requires me to switch context several times a day as I review different business areas throughout the day. I enjoy the complexity and variety of problems,” says David.

David to mitigate business problems with data science practices routinely does the groundwork to understand the underlying issues. In one instance, David went on the field to deliver food as a Swiggy delivery representative. During this run, he identified that Swiggy’s delivery partners would get anxious after delivering their order as they didn’t have any idea where they should go next in order to increase their chances of receiving another order. Consequently, Swiggy’s data science team then worked on a solution and provided a heatmap feature that suggests the drivers to move towards a particular location where the potential to get orders are high. David believes that at times real-world problems cannot be identified with data, thus it is essential to be on the field too. Therefore, he advises other businesses to adopt such strategies to find problems and solve them with data science practices.

David also hires data scientists, and seeks people with statistical, developer, and consulting skills. In addition, in applicants, he looks at a good cultural fit for Swiggy.

“Data science is not about degree/certification but the mindset. With a PhD, you can go in-depth on one subject. However, from a data science and analytics perspective, it is crucial to have a quantitative bend of mind for using a data-driven approach to help systems and people make decisions. This requires a broad range of skills, knowing one kind of analytical technique is not enough. One has to be knowledgeable in a broad range of skills right from basics like hypothesis testing to advanced deep learning techniques, which you cannot learn in PhD. Constant learning over many years on a breadth of analytics techniques make you a successful data scientist,” explains David.