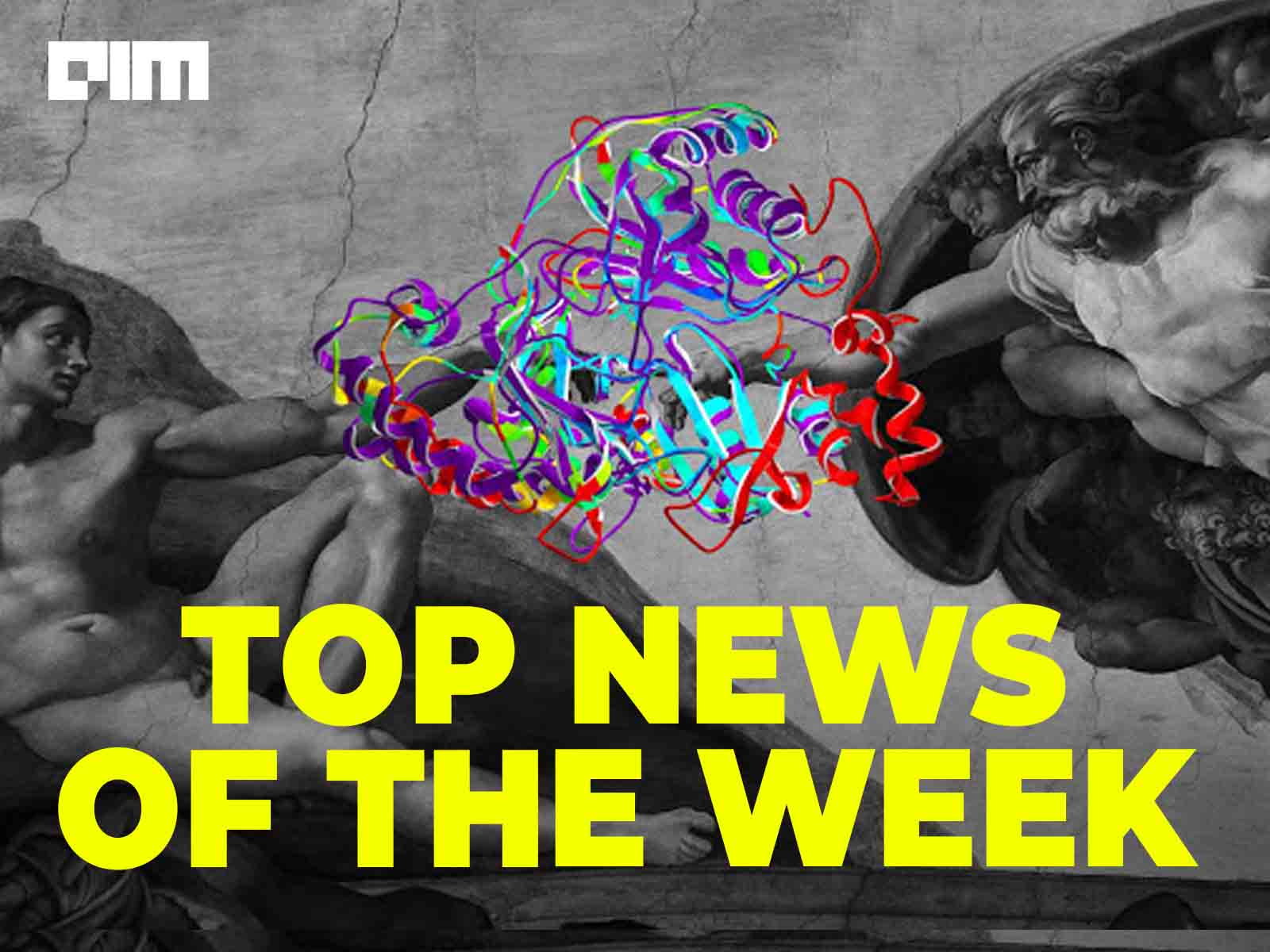 What does it take to make a breakthrough in the 21st century? We have had theory of relativity, the era of transistors and structure of DNA in the 20th century. Today the field of sciences are considered to have become too narrow to make a breakthrough in the traditional sense. However, Artificial Intelligence, which has been championed by many to revolutionise every field that it enters, finally has something to flaunt– a breakthrough. In what might be the potential turning point in the field of biology, DeepMind has developed an algorithm that can accurately predict structures of proteins. Academics and Nobel laureates assert that this is a key moment in the history of mankind. Know more about this breakthrough along with other interesting news in this week’s top news brought to you by Analytics India Magazine

Salesforce has acquired Slack for approximately $27.7 billion. This will combine Slack with Salesforce Customer 360 and will be transformative for customers and the industry. The combination, said the companies, will create the operating system for the new way to work, uniquely enabling companies to grow and succeed in the all-digital world. “Stewart and his team have built one of the most beloved platforms in enterprise software history, with an incredible ecosystem around it,” said Marc Benioff, Chair and CEO, Salesforce.  Whereas, Salesforce CEO Steve Butterfield believes that this acquistion is the most strategic combination in the history of software, and I can’t wait to get going

According to Platformer, who has obtained mails from both parties, Ms. Timnit Gebru, one of the top AI researchers in the Ethics department at Google had been fired for going against the company’s policies. She alleged that the company has been creating hurdles for the type of research she was trying to publish.

“I understand that the only things that mean anything at Google are levels, I’ve seen how my expertise has been completely dismissed,” wrote Ms.Gebru in her email.

Google, who reportedly found the email inconsistent company’s expectations and parted ways with Ms.Gebru. Mr. Jeff Dean who is a key figure in Google was in the midst of this whole ordeal who was repeatedly named by Ms. Gebru in her tweets. Addressing this issue, Mr. Dean sent out an email to the employees at Google adding his version of the story. “Timnit wrote that if we didn’t meet these demands, she would leave Google and work on an end date. We accept and respect her decision to resign from Google,” explained Jeff Dean in his response.

Alphabet Inc.’s Loon is on an ambitious mission to provide internet connectivity from their custom made balloons and they claim to be the world’s first company to use reinforcement learning in a production aerospace system. Driving a super-pressure balloon through the stratosphere has only two simple options: go up or go down. Nonetheless, navigating that balloon skillfully is deceptively complex. Loon’s navigation system for the stratospheric connectivity mission, is leveraging Google AI’s reinforcement learning algorithm to develop a more powerful navigation. This contrasts against the conventional approach of the automated system following fixed procedures artisanally crafted by engineers. Codenamed Project Sleepwalk, Loon balloons use a new distributed training system that is trained on proprietary simulation of balloons in the stratosphere and a learner that uses distributional Q-learning to make sense of tens of millions of simulated hours of flight.

Today, DeepMind announced that the latest version of AlphaFold solved a crucial problem– protein folding, which the scientists have been working on for over 50 year. Current methods use Cryo-electron microscopy, Nuclear magnetic resonance, or X-Ray crystallography cost millions of dollars, and employ a time consuming trial and error approach. DeepMind’s Alphafold promises to improve this scenario. According to Arthur Levinson, founder of Calico, AlphaFold is a once in a generation advance, and it demonstrates how computational methods are poised to transform research in biology and hold much promise for accelerating the drug discovery process. While many researchers and visionaries like Elon Musk have congratulated DeepMind, few academics argued that it is “laughable” to say the protein folding is solved!

At the recently concluded Labs Day expo, Intel has announced that they have achieved breakthroughs in applying neuromorphic hardware to a range of applications, from gesture and voice recognition to autonomous drone navigation.

Neuromorphic computing circuits mimic the human nervous system’s biology and are thought to have potential to develop supercomputers 1,000 times more powerful than what we have today. For instance, Intel’s own neuromorphic chip– Loihi, contains over 2 billion transistors and 130,000 artificial neurons with 130 million synapses and Intel claims to have achieved speeds in many orders higher than traditional processors. Neuromorphic computing is definitely one of the top trends look forward to in 2021.