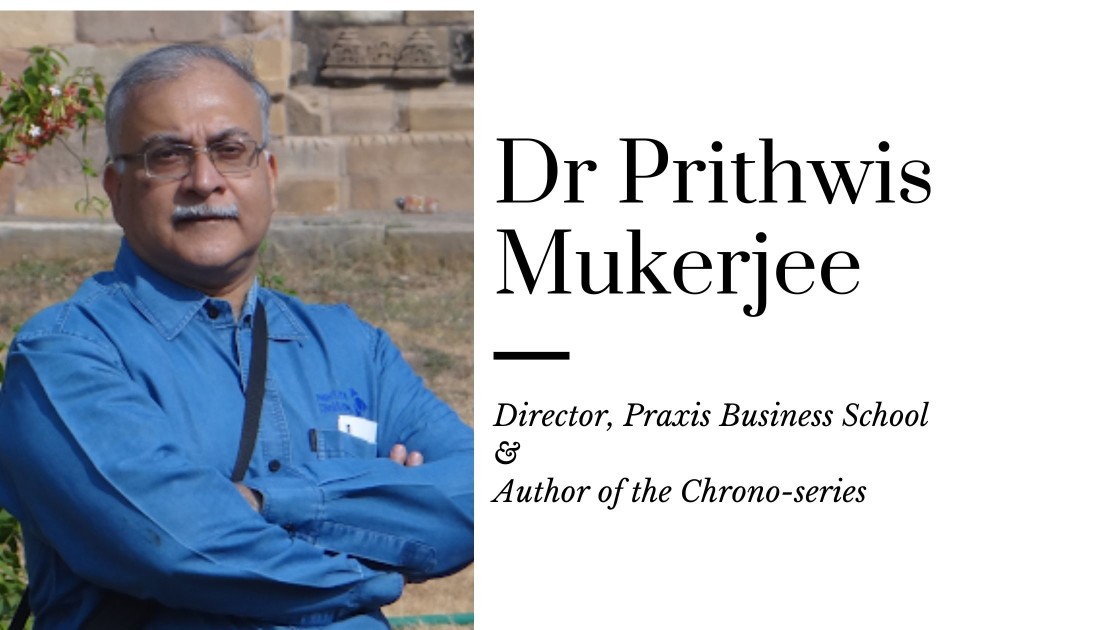 “I do not fear computers, I fear the lack of them”

Like the famous American writer Isaac Asimov, Dr Prithwis Mukerjee too considers machines his friends. Dr Mukerjee says he feels most at ease while working with machines. Given the shared love for computers and machines, it hardly comes as a surprise that Asimov is also his favourite science fiction writer.

After a successful stint in the corporate world, working with big names such as IBM, PricewaterhouseCoopers, and Tata Steels, Dr Mukerjee pivoted to academics. He is currently the director of Praxis Business School, Kolkata.

In 1999, when the internet craze was just kicking in, Dr Mukerjee started his blog Yantrajaal, one of the first 500 blogs in India in all likelihood. Dr Mukerjee has written a few books on AI and data science, the most recent being Deep Learning for Business Managers.

His latest, the Chrono series trilogy, is a ‘labour of love’. The first in the series is Chronotantra (the law of time) followed by Chronoyantra (the time machine). The third novel Chronomantra is still in the ideation phase.

“In 2015 I was contributing a monthly column at an online website on the impact of technology on society. While doing the research for the same, I accumulated a lot of material on a wide range of technology from space through bio-hackers and far-out physics and, of course, robotics and AI. While going through all this, I realised I was getting novel ideas that unfortunately I had no way of verifying or validating on my own. I could not put them in the articles because they had to be based on proven facts. So, I decided to collect these half-baked ideas and create a science fiction novel where I could take liberties with facts,” said Dr Mukerjee.

The first book Chronotantra was released in 2019, followed by Chronoyantra which was completed by the end of 2020.

Written in simple language, both books explore technological themes through the lens of Advaita Vedanta—a dominant Indian school of thought espousing the idea of ‘Brahman’. “Actually, science and philosophy are but two sides of the same coin. Newton named his famous book, Philosophiæ Naturalis Principia Mathematica (Mathematical Principles of Natural Philosophy) and the degree that I have is Doctor of Philosophy. In Indic thought, philosophy is referred to as Darshan or observation which is a key element of modern science. So, it is not difficult to combine these two subjects at all. Both are enquiries into the nature of the universe and its mysteries,” Dr Mukerjee said

Chronotantra is set in 2150. AI has taken over the world. The main protagonist of the story is Lila, a Santhal tribal woman from Rajrappa Hills, who rises through the ranks to become a brilliant engineer. The story follows her to the shores of the Caspian Sea, Hangzhou (China), Townsville on the edge of the Grand Canyon, Gandhar, and eventually to the planet Mars. Lila has been chosen by AI for fulfilling a cosmic mission. Without her knowledge, AI has looked after her, identified her weakness, and guided her to ultimate destiny.

The second novel Chronoyantra is both a sequel and prequel to Chronotantra, said Dr Mukerjee. “Chronoyantra has two parallel stories running along–what happened before and what happened after. The way these two come together depicts the fabric of time. My books are about time. How time overlaps is something I have tried to put together. So, situations that were separated in time somehow collide and come together,” said Dr Mukerjee.

Dr Mukerjee aims to dispel the myth that AI is a threat to civilization. Instead, he wants readers to think of AI as a friend. “Walter Lippman coined a famous phrase, ‘The world outside and the pictures in our heads.’ Each of us has an inbuilt image of the world that helps us navigate through it in a way that we think best. AI has another image like that, created by the data or information on which it is based. So just like there are good, nice, bad and evil persons with whom we have to live within this world, there will be good, nice, bad and evil AI with whom we will have to live with in the world that awaits us. In the world created in my novel, I see, show and deal with a nice AI who I have portrayed as a friend of the protagonists in my novel,” he said.

Dr Mukerjee also revealed his research process for writing these novels. “These books are fictional stories, so apart from the tech basics, I took my liberty as an author and based it on my imagination and creativity. However, I extensively referred to Google Maps since my story is spread across multiple countries. I spent a lot of time understanding intricacies such as the location of buildings, lanes, view from a certain point, the direction of the wind at a given location and time. I also referred to Google Mars to understand the red planet’s landscape. I can say I can visualise what Rovers on Mars would be viewing.”

Dr Mukerjee is a fan of Asimov’s style of writing and storytelling in science fiction. While there are many sci-fi writers whose work he admires, he feels one area that needs to be improved is logical plausibility. “I have no problems with a man flying through the sky (which is impossible today), but I am disturbed when I find logical gaps, say, I am shopping online and the next moment I am in Delhi killing a dinosaur. There has to be some logical connection between my online shopping and the killing of dinosaurs. When I see such things in sci-fi novels, I get very disturbed. I try to make sure that I connect all the dots correctly,” he said.

Why Did Microsoft Acquire ReFirm Labs?