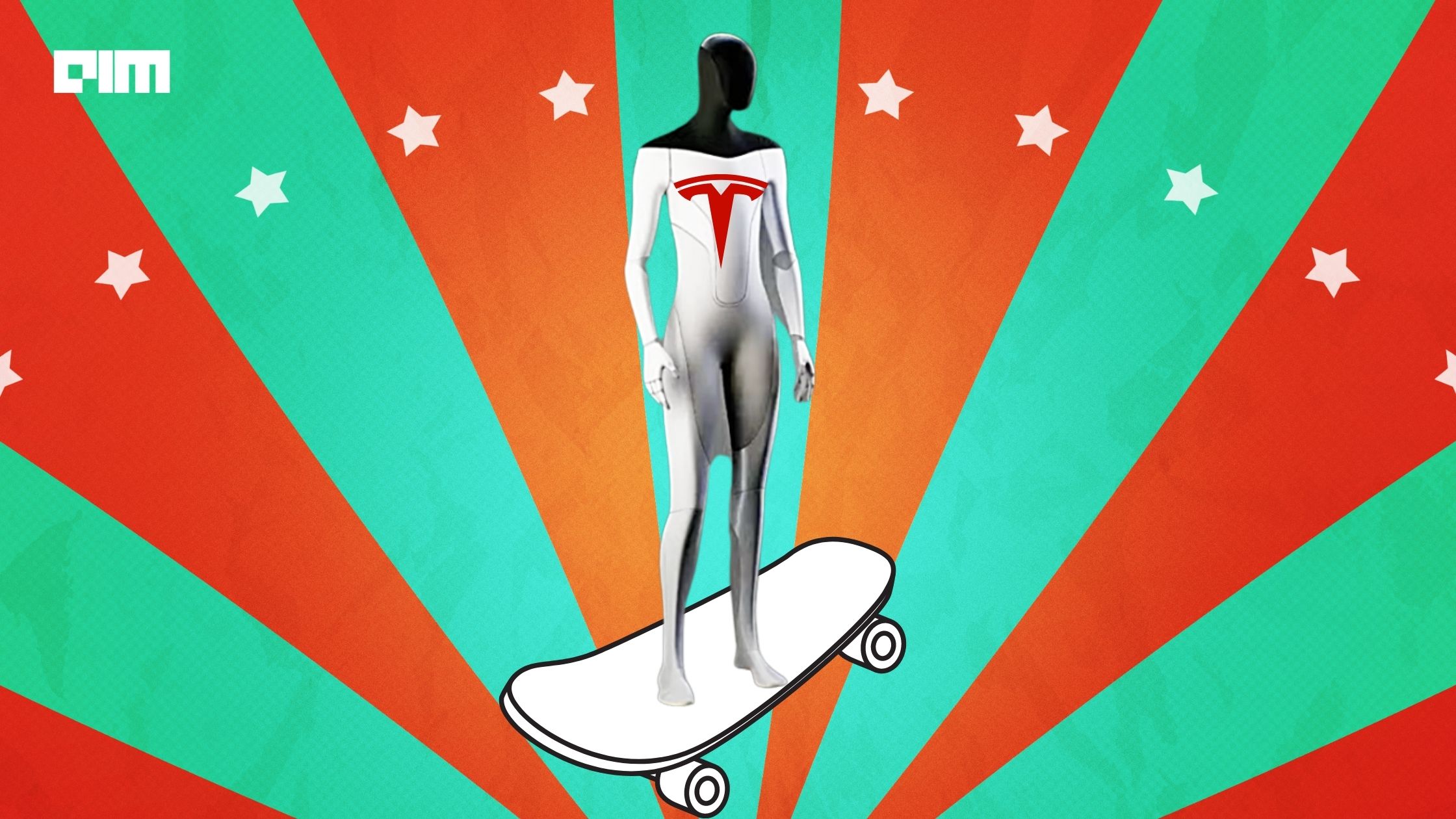 The announcement was rather bland; as soon as Musk made it, a person dressed as what would eventually look like the Tesla Bot performed a bizarre dance.

Musk revealed that Tesla would be ready with a working prototype of Optimus by next year.

If one were to go by Musk’s promises, Tesla, popularly known for building electric and self-driving cars, now plans to branch out to produce humanoid robots. He further added that the humanoid robot is being developed with the aim to eliminate “dangerous, repetitive and boring tasks.”

Having said that, Musk also emphasised how Tesla’s self-driving cars’ technologies will be applicable to or help create the humanoid robots. He said, “Tesla is arguably the world’s biggest robotics company because our cars are like semi-sentient robots on wheels.” He also added that it only makes sense to put the same technology onto a humanoid form. The CEO further boasted of being “quite good” at making sensors, batteries and actuators.

The robot will be made 173 centimetres tall, weighing 57 kilograms, and powered by 40 electromechanical actuators. According to Tesla, its face will feature a display screen, and it would be able to carry a cargo of up to 20 kilograms in weight, with a walking speed of eight kilometres per hour.

“We’re setting it such that at a mechanical and physical level, you can run away from it and most likely overpower it,” said Elon Musk. Hinting at concerns around artificial intelligence taking over humans, he further added that he hopes that is not required, “…But you never know.”

Known for his bold comments and out-of-the-world claims, Elon Musk responded to a Twitter user asking if Optimus will be mass-produced and sent to Mars, to which Musk responded, “Hopefully.”

Despite optimistic predictions, robotics companies do not seem to be flourishing the way they expected when starting up. In 2018, Rodney Brooks founded, much-celebrated robotics company Rethink Robotics, went bust for lack of funds. A year later, Anki, a San Francisco-based robotics company, had to shut shop after nine years of existence, owing to bankruptcy. Soon after, MIT-origin Jibo, which earlier made headlines for its exceptional social bot for homes, put the lid on, even after raising over $70 million.

The most popular player in the block — Boston Dynamics, was sold off by Softbank to Hyundai at a valuation of $1.1 billion, the latter acquiring an 80 per cent stake in the company. While Boston Dynamics did make some noise in the industry and charmed people with its agile commercial robot SPOT, its high selling price ($74,500) limited its adoption in the mass market.

Thus, if history provides evidence, thriving a robotics company is more challenging than starting one. This can be primarily attributed to the difficulties associated with getting a metal humanoid to perform the same tasks seamlessly as a human. For this same reason, robots are primarily deployed to perform stationary and repetitive tasks.

Despite grand ideas that never took off, Tesla has been a trend-setter in all things electric and autonomous vehicles. Interestingly, for some time now, robotics has been adopted in the space industry to fuel explorations. Tesla’s venture into the robotics space can also indicate a possible coming together with SpaceX. Only time will tell whether the Tesla Bot will see the light of the day or become just another potential idea in a failing industry.