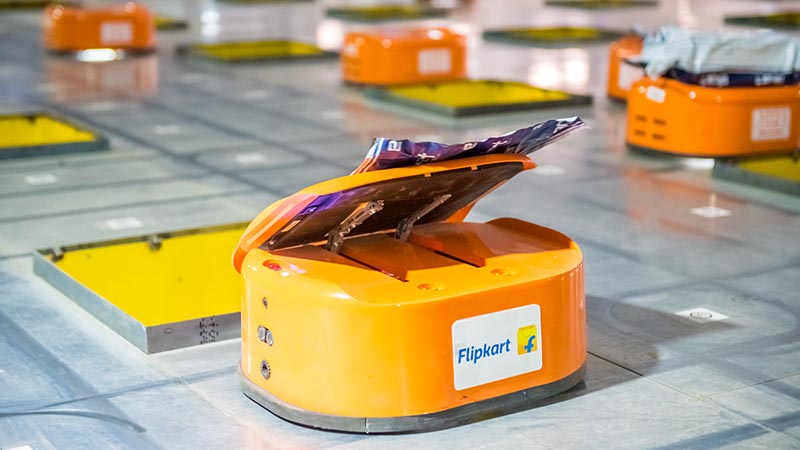 Indian e-tailer Flipkart has reportedly quadrupled its robots or automated guided vehicles (AGVs) ahead of their flagship pre-Diwali sale called the Big Billion Day. Launched in May this year, Flipkart had started of with 100 of these robots and now plans to increase the number to 340.

The bright orange AGVs are about the size of a Roomba, and move swiftly. They’re loaded with sensors, which means that, despite there being over a hundred of them in an enclosed area, they don’t bump into each other, but rather wait as self-driving vehicles would in traffic. And they run 24/7, except when they automatically guide themselves towards designated charging points when batteries run low. From March this year, these AGVs have been working in tandem with the humans at the Flipkart facility, to process over 4,500 packages an hour. Flipkart’s robot-based sortation technology is the first in India, and among Asia’s first such deployments outside of China.

Flipkart had said that every detail in the AGV process is uniquely Indian. The mezzanine, control wiring, conveyor belts and even the chutes have all been designed locally. “People are excited to see the bots on the second floor — that is the novelty for sure. But the work from our local teams to really adapt it to our country — basically the Indianization of it all — happens on the first floor… It’s a combination of what could be delivered from China and the design inputs made in India.”

How AI Is Being Used By Companies During the Festive Season