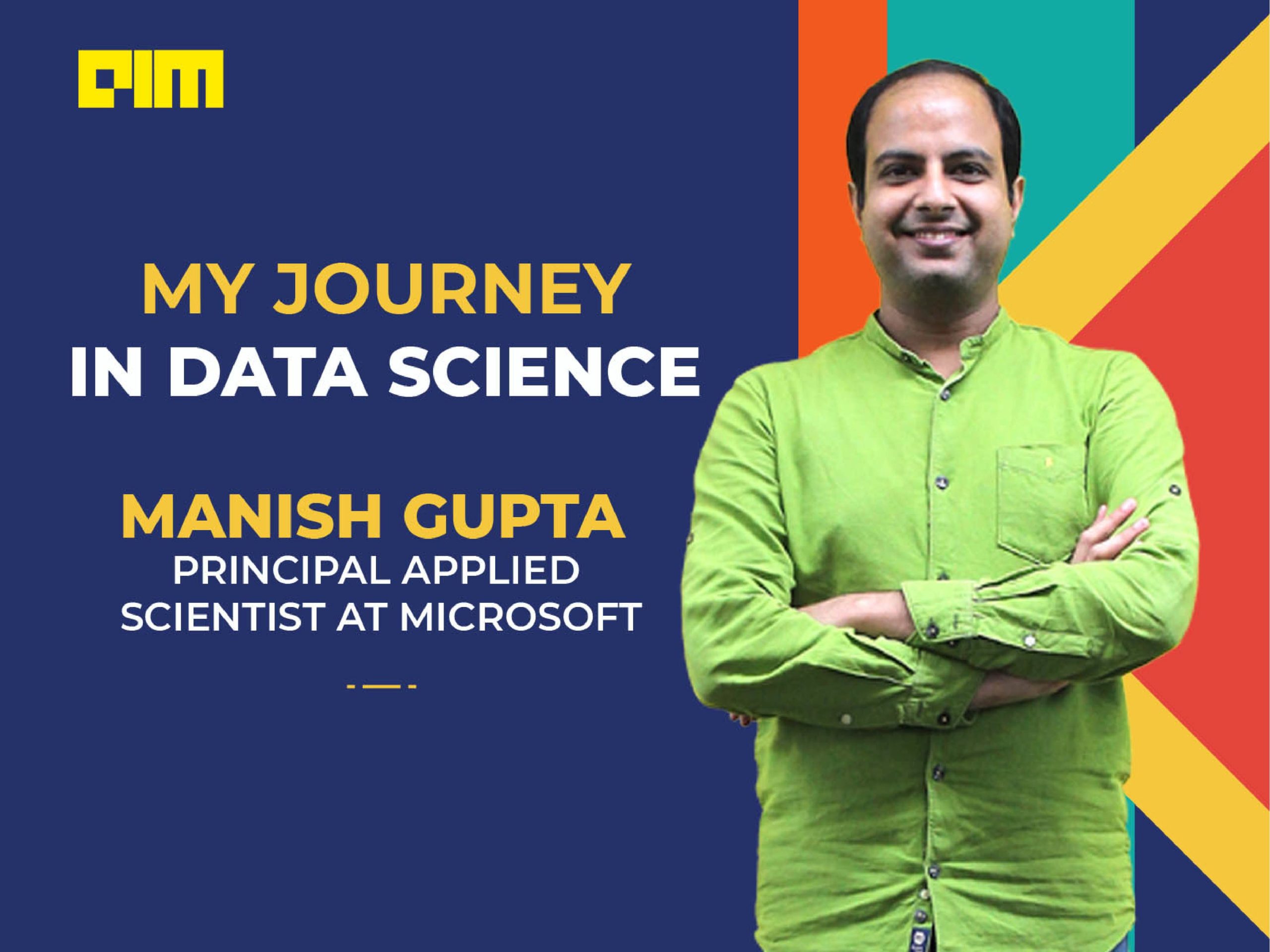 Today, data science aspirants try to take a shortcut by enrolling in part-time or short-term courses instead of opting for a full-time program. Consequently, aspirants often fail to make a difference to land jobs. This is also one of the prime reasons why recruiters witness a shortage in data science experts even though there is a rapid increase in enrolments in online courses. Undoubtedly, for professionals who want to switch their career, MOOCs might be the best option, however, for students, it might not be an ideal way to go about.

So what is the best way? Full-time or part-time programs in data science? To answer such questions and help aspirants make better decisions, Analytics India Magazine gets in touch with prominent data scientists and brings their story out to understand what worked for them. As a part of our weekly columns My Journey In Data Science, we interviewed Manish Gupta, Principal Applied Scientist at Microsoft. Gupta has published 100+ research papers and still continues to learn from the community as well as give back to the community by teaching others.

During M.Tech, Gupta learned about statistics and machine learning techniques and joined Yahoo in 2007, where he worked till 2009. He then enrolled for a PhD in data mining and computer science at the University of Illinois to gain in-depth knowledge of data science. After completing his doctorate in 2013, Gupta joined Microsoft as an applied researcher. Besides, he also associated himself with IIIT and became a visiting faculty. Today, while working for Microsoft, he continues to visit colleges to teach and carry out research. “I am fortunate to spend almost half of the years in academia and remaining half at the industry,” says Gupta.

Gupta learned from various courses he enrolled at IIT Bombay and the University of Illinois. He said it was pretty easy for him to build the basics in data science as the domain was not as evolved as it is today. However, he believes, today, it is difficult for aspirants to catch up at the same time stay abreast of the latest developments. Consequently, he suggests opting for a full-time course from renowned universities such as IITs or IIITs to get in-depth knowledge.

“People want to learn data science quickly so that they can quickly start making money. But that is not how anything works, everything requires effort. If anyone wants to learn the right way, online courses are not enough,” believes Gupta. “If one has time, he/she should learn from the core by pursuing M.Tech if not PhD rather than doing some superficial data science.”

However, Gupta said it is challenging to take a full-time program for working professionals or someone married. But, students should not shy away from enrolling in M.Tech to strengthen their computer science knowledge and in turn, data science techniques.

Talking about the advantages of full-time programs, Gupta stressed on the fact that one can think about problems in a matured way. Someone who has learned through online courses rigorously tries to apply random techniques. But someone who has thought deeply while pursuing M.Tech or PhD knows how to look at problems in a more detailed way instead of applying whatever is available readily at hand; It’s basically using the tool versus knowing exactly how the tool works.

Just by knowing inputs and outputs of the tool, one can use it in most of the use cases, but sometimes they fail to understand how it worked the way it worked. Knowing precisely what happens internally is crucial for debugging things and in general, come up with better solutions, especially when one is dealing with strenuous use-cases.

Data science cannot be learnt in a few months, it’s a long process. Thus, full-time courses are the best way to go in-depth and differentiate from others. Nevertheless, Gupta said that working professionals are left with fewer options and should leverage online courses to learn in a guided manner instead of learning everything by themselves.

At Microsoft, Gupta’s job is a combination of product development, academia teaching and research. He works with multiple teams at Microsoft in Bing on various data science challenges. As a part of his job, he also identifies relevant AI work and encourages them to design better products.

He further added that building data science solutions are one thing, and deploying them in real-world is another. Real-world deployments require handling multiple challenges, including infrastructural (run time of the models), ethical, legal, and around interpretability of results from such solutions.

Gupta is a firm believer of working hard and learning in guided ways as there are no shortcuts for success. And since data science is vast, he said that one needs to have the right strategy to become proficient. Gupta reckons that learning everything is very difficult. Thus, one should broadly know about various concepts and then pick an area of interest to go in-depth. Besides, aspirants should learn how to tell stories based on data; data science is not only about generating insights from information and solving problems but also to explain the outcomes to stakeholders through storytelling.