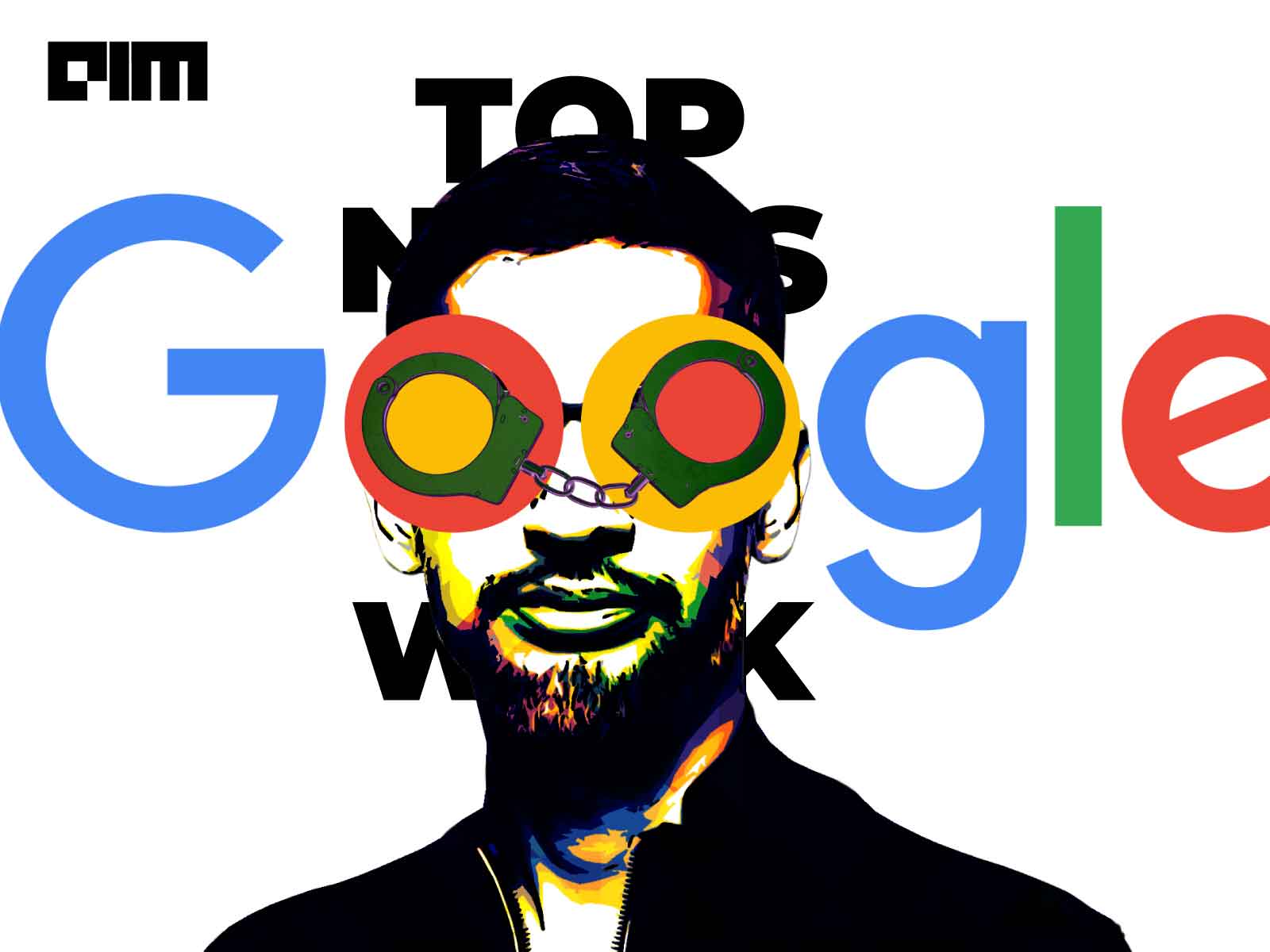 The big tech is undergoing an unprecedented phase of setbacks almost every week. This week  the troubles were more of self-inflicted chaos fueled by mishandling and miscommunication with one of their own. The events that followed Ms.Timnit Gebru’s ousting has forced the Alphabet’s chief to pen an apology accepting full responsibility for the whole episode. But looks like it won’t stop here as few of the big names from the AI community showed their dissent by declaring that they won’t be reviewing research papers from Google AI until they resolve their issue with Ms.Gebru. This week had more in store for Google. Read about it in this week’s top tech news brought to you by Analytics India Magazine.

This week, the prestigious NeurIPS conference concluded its 34th edition, virtually. In total, there were 1,903 papers that were submitted. That’s a 38% rise compared to 1,428 in 2019. OpenAI’s GPT-3, as expected, was one of the most discussed topics. This year too, the jury at NeurIPS awarded top honors to handful papers depending on:

Boston Dynamics produces highly capable mobile robots enabling automation in difficult, dangerous, or unstructured environments. The company launched its first commercial robot, Spot in June and plans to expand the Spot product line early next year with an enterprise version of the robot with greater levels of autonomy and remote inspection capabilities, and the release of a robotic arm, which will be a breakthrough in mobile manipulation. With its computer vision solution, Pick, for depalletizing and its mobile warehouse robot in development, Boston Dynamics aims to expand Hyundai’s footprint in logistics robots.

Sundar Pichai, CEO of Alphabet Inc., sent an email on Wednesday to his employees addressing the ongoing episode surrounding Ms.Timnit Gebru’s ousting from the company. Mr.Pichai in his mail, stated that he is sorry and he will work to restore the trust of his employees. In the mail, Pichai accepted full responsibility for the way in which Ms.Gebru has left the organisation. He also added that this loss has had a ripple effect through some marginal communities, who saw themselves and some of their experiences reflected in Dr. Gebru’s.

On Thursday, Amazon announced that they would be amassing a 29 million strong workforce for their cloud services– AWS– by 2025. As per this initiative Amazon will train, retrain and encourage people across the globe to upskill themselves in one of the most sought after skills of this decade– cloud computing. Amazon will also be partnering with non profit organisations, schools and others to make sure that their efforts have a wider reach.

Cloud computing services have become central to Amazon’s huge profits. AWS posted $11.6 billion in sales in the last quarter, up 29% from a year earlier. By having 29 million people with basic training on AWS tools, Amazon is poised to reign the cloud markets in the next decade as well.

Uber’s ambition to lead the self driving cab services markets has opened a chapter as the ride-hailing service provider agreed to sell their self driving division known as Advanced Technologies Group(ATG) to a rival company– Aurora Innovation Inc.. sold its self-driving-car unit to Aurora Innovation Inc., to become profitable. The two companies on Monday said that in addition to acquiring ATG, Aurora will work with Uber to deliver the autonomous trucking. “ Our relationship with Uber puts us in the unique position to be a leading player in both autonomous trucking and passenger mobility. In support of Aurora’s partnership with Uber, Uber is investing $400 million in Aurora and Uber CEO Dara Khosrowshahi is joining our Board,” said the press release.

Back in May this year, Uber had also announced that they will be winding down futuristic Uber AI labs, which was known for introducing new tools and techniques to the ML community. Uber is one of the companies which is undergoing a major restructuring fueled by the pandemic.

Looks like the American big tech companies’ European woes aren’t going to end anytime soon. This week Google and Amazon were combinedly fined a hefty $163 million by French watchdog CNIL, blaming the companies for their devious ways in which they have collected information about website visitors.

According to WSJ, the French regulator, the CNIL, alleged these companies of storing advertising-related identifiers on millions of users’ computers without consent, and without sufficient explanation.

Though Google and Amazon have updated their website in Europe to stop placing advertising cookies before asking for consent– following CNIL’s warning last year–  the French regulator said that the companies still don’t properly explain how the cookies are used. As a result CNIL has ordered both companies to inform their users within three month—or face further fines of €100,000 a day.

On Wednesday, a group of 46 state attorneys have filed antitrust lawsuits against Facebook in an attempt to break up Facebook’s highly profitable ventures– Instagram and WhatsApp. Addressing the lawsuit, Facebook CEO, Mark Zuckerberg sent a memo to his employees assuring them that the company would prevail in court.

“Our acquisitions of Instagram and WhatsApp have dramatically improved those services and helped them reach many more people. We compete hard and we compete fairly. I’m proud of that,” he wrote.

A Fest For Next-Gen Journalists

Two years ago, Google launched JournalismAI in partnership with London School of economics. It is a global effort to foster media literacy in newsrooms. Since its launch, more than 60,000 journalists have taken the introductory courses in machine learning. This week, Google hosted a week-long(Dec 7-11) JournalismAI festival, an online event to bring together international academics, publishers and practitioners. The virtual event featured speakers and case studies from major global organizations including the Associated Press, the Wall Street Journal, The Guardian and more.