Govt Employs Drones To Monitor Situation Amidst CAA Protests: Should We Be Worried? 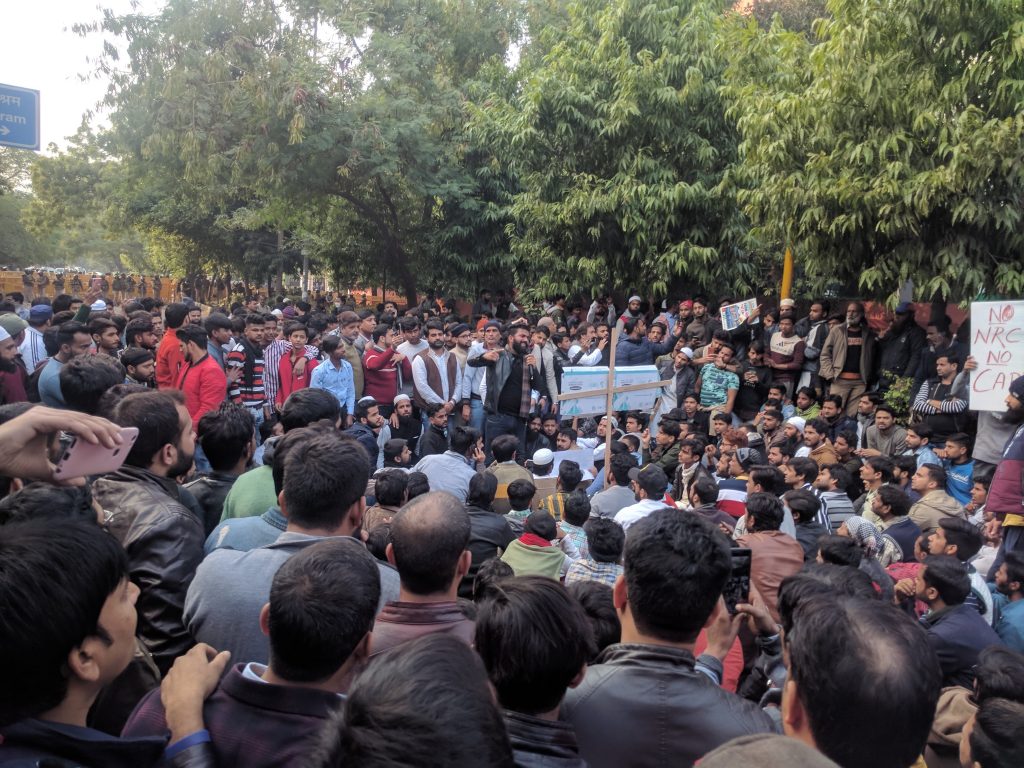 With the technological feat in India, the Government is not behind in using it to advance its mission to prevent and combat crime. As the protests in the central, against the Citizenship Amendment Act (CAA), are becoming violent, the Delhi police started deploying drones to monitor the situation, keep a watch on protesters, and identify potential trouble zones.

According to police officials, as the nationwide protests are rising, the drones are helping the central in keeping peace in India’s national capital. They said that the drones took images of several areas of Seelampur — North East Delhi, where angry protestors were demanding to scrap the CAA by torching several motorcycles, pelting stones at security personnel, and damaging buses and police booths. “Images taken by the drones will play a vital role in the police investigation,” said the official.

He further added, “Drones are of big help in case of massive law and order situations, where things go out of hand. The recordings from the surveillance will help in identifying those who cause a situation to turn violent.” The officials have also deployed aerial surveillance in Mayur Vihar area, to identify warmongers and wrongdoers. Although a lot of protests were hijacked by opponent leaders, the majority of the protesters include mostly students and local residents of the area.

Even for Madras, the high court passed interim orders to Tamil Nadu police to ally with drones for video graphing the anti-CAA rally by the Dravida Munnetra Kazhagam. In fact, the central government has been using drones for surveillance for over four years now for several situations. In 2014, such air surveillance technology was used by the police, during the Trilokpuri riots, to monitoring the fragile situation and identifying potential trouble zones in the east Delhi locality. Along with that, earlier this year, the centre has used drones to carry out surveillance in parts of the city under SC verdict, during the Ayodhya land dispute case.

The drone in use, according to the news, has been developed by the Defence Research and Development Organisation (DRDO) in collaboration with a Mumbai-based startup, IdeaForge. These drones are also known as Netra UAVs (Unmanned Aerial Vehicles), which are a small lightweight man-portable machines with thermal night-vision, which can be launched from a small clearing, made to fly over the area of interest at a height of up to 200 meters AGL sending real-time continuous video footage.

Several drone-related controversies have occurred in London, UK, earlier this year, where protesters have targeted airports in an attempt to disrupt its operations. In one of the cases, climate change activists started flying drones around Heathrow Airport in an attempt to shut it down and aware people about climate change. Another case involved Gatwick Airport, where flights were suspended for 30 hours after the drone attacks led by activists and protesters.

In November 2019, another incident that came into the limelight was the usage of drones during the Santiago, Chile protest against the increase in metro prices. As the protest grew into a nationwide discontent, lawmakers used drones as a surveillance method. However, the Chilean protesters later used laser technology to bring down the drones.

Such an innovative tactic was believed to have arrived from the protest in HongKong — related to a controversial bill —where protesters used several technology tricks to stay ahead of the authorities. They used lasers to blind security forces and facial recognition cameras used by authorities.

In India, a few months earlier, during the Kashmir protest against government revoking provisions of Articles 370 and nullified Article 35-A, when there was an Internet shutdown, police has used UAVs to keep an eye on protesters and their movement, which caused a huge surprise among the protesters.

Drone surveillance is becoming ubiquitous nowadays, however, the deployment of any new technology requires a heavy understanding of its impact and challenges that it comes with. Although these new technologies, especially robotic drones could be of great use for agriculture, real estate and construction industry, they come with the chance of being abused against the fundamental rights and can be used governments for creating a dystopian future. Unfortunately despite potential benefits of drones in commercial purposes, it isn’t a very reliable choice for people with negative intentions.

In this case — civil rights people, liberties groups, and protesters have already started accusing the government of using the surveillance footage of the protests to recognise protestors and harass them later. The public demands to know how this will affect privacy, and what legal limitations it comes with. With such a huge angered population in the country, such unethical human rights violations can infuriate the crowd and can lead to severe tension in the country.

Air surveillance is, in general, has always been termed as a symbol of intimidation and oppression, where one can spy people from above and keeping them under scrutiny. A hovering drone can be operated from a distance, has limited accountability and users can be anonymous while using such a technology, and therefore can definitely be used by people with wrong intentions.

Unless the government protects the area under surveillance or develops an effective framework to countermeasure the negative usage of the technology, it can always be used to create tension in the nation.

Here is how drones and its surveillance footage could be misused by the officials against protesters:

According to a study, drones come up with several benefits over helicopters — being cheap and quieter, accessible to users, and easy to use while blanketing an entire city. However, the study also revealed that it’s important for participants to understand the requirement of using drones and the system need to be well regulated. Additionally, authorities need to deal with the privacy concerns of the technology along with regulated usage of drones for specific missions and not on a continuous basis.

Public, all over the world, is less concerned about private companies like construction or real estate, driving drones for their business usage, but are concerned about drones owned by the government and law enforcement authorities. Another study, carried out last year, stated that 54% of the public thinks drones should not be allowed to fly near people’s homes. As a matter of fact, unmarked drones has generated the most amount of privacy concerns.

Apart from a general privacy concern, drone surveillance also increases the risk of cybersecurity. When a drone is being used for a certain task, it gathers tons of tremendously sensitive data, which are available to government, however, considering the data is stored in a device, it provides a back door for hackers to access that humongous data in a jiff. In fact, drones can now be easily hacked, and the tools that are required to perform these hacks are also available in the market very easily. Such issues raise an important question of whether our lawmakers are capable enough to protect us and our data from the privacy threats presented by drone technology.

So in conclusion, such incidents tell us that, in general, people do not like to be watched and scrutinised. They particularly do not approve to have surveillance being done secretly from the sky. And they really do not like being targeted on basis of that footage.

In fact, responsible usage of drone surveillance can help authorities and lawmakers in monitoring areas that are humanly inaccessible. Safe usage of drones can also be done in finding missing citizens, providing the first aid to natural disasters recipients, and creating an efficient inspection. At the same time, there is a continued rapid propagation of drones, which will undoubtedly trigger a rise in privacy concerns. To ensure a beneficial implementation in the society of such an innovative technology, it is required to have a strict assessment of regulatory frameworks on privacy concerns.