GPT-3 Vs BERT For NLP Tasks 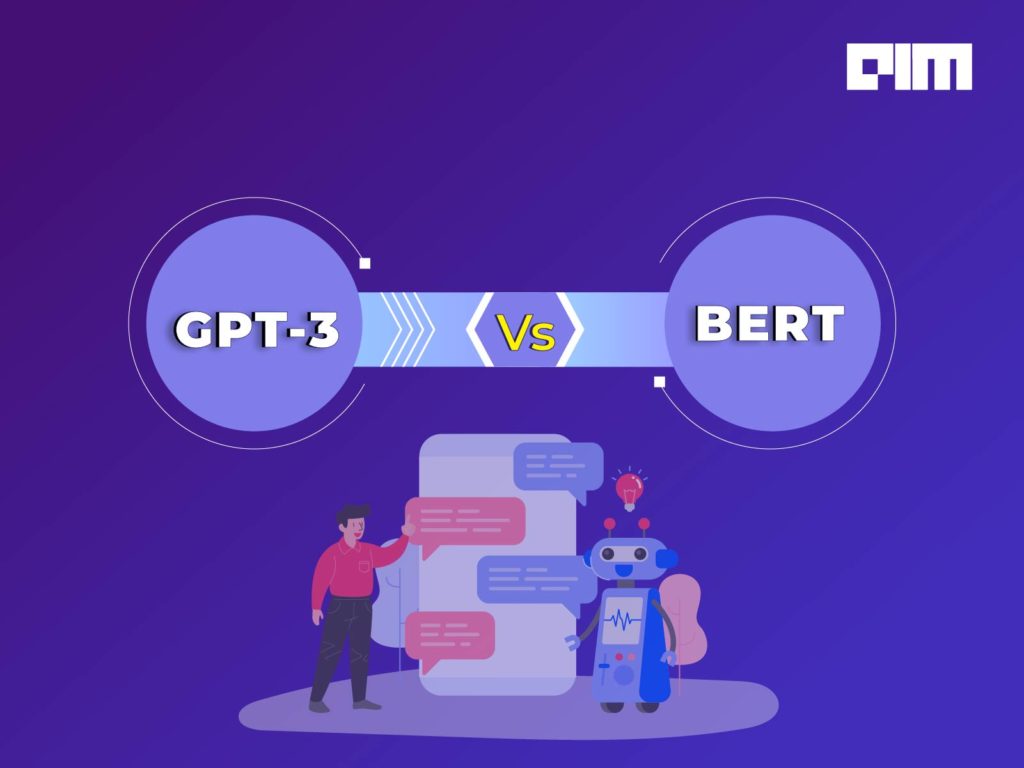 The immense advancements in natural language processing have given rise to innovative model architecture like GPT-3 and BERT. Such pre-trained models have democratised machine learning, which allows even people with less tech background to get their hands-on building ML applications, without training a model from scratch. With capabilities of solving versatile problems like making accurate predictions transfer learning as well as feature extraction, most new NLP models are typically trained on a wide range of data, in billions.

These pre-trained models defeat the purpose of training a model from scratch unless one is interested in investing much time and effort building one. Instead, the language models like BERT can easily be fine-tuned and can be leveraged for the required tasks. However, the advent of more advanced versions like GPT-3 has made the work even easier for users, where one just has to explain the task, and with a click, one can create their desired application. Such advancements highlight the cutting edge competencies they bring.

With that being said, it can be difficult for many to get a comprehensive understanding of the comparison between these pre-trained NLP models — case in point: GPT-3 and BERT. They not only share many similarities but also the newer models are always termed to surpass previous models on some or the other parameters. Therefore, this article will understand the overview of each model, along with their comparison.

Before heading into the comparisons, let’s talk a little about the two models along with some of their advantages.

BERT, aka Bidirectional Encoder Representations from Transformers, is a pre-trained NLP model developed by Google in 2018. In fact, before GPT-3 stole its thunder, BERT was considered to be the most interesting model to work in deep learning NLP. The model, pre-trained on 2,500 million internet words and 800 million words of Book Corpus, leverages a transformer-based architecture that allows it to train a model that can perform at a SOTA level on various tasks. With the release, Google showcased BERT’s capability on 11 NLP tasks, including Stanford competitive QA dataset.

Surpassing previous models’ capabilities and accuracy, OpenAI created one of the most controversial pre-trained NLP models — GPT-3, after its major setback with GPT-2. Similar to BERT, GPT-3 is also a large-scale transformer-based language model, which is trained on 175 billion parameters and is 10x more than previous models. The company has showcased its extraordinary performances for tasks like translation, Q&A, and unscrambling words. This third-generation language prediction model is autoregressive in nature and works like traditional models where it takes the input vector words and predicts the outputs based on its training. With unsupervised machine learning and few-shot learning, this model works in context.

BERT vs GPT-3 — The Right Comparison

Both the models — GPT-3 and BERT have been relatively new for the industry, but their state-of-the-art performance has made them the winners among other models in the natural language processing field. However, being trained on 175 billion parameters, GPT-3 becomes 470 times bigger in size than BERT-Large.

Secondly, while BERT requires an elaborated fine-tuning process where users have to gather data of examples to train the model for specific downstream tasks, GPT-3’s text-in and text-out API allows the users to reprogram it using instructions and access it. Case in point — for sentiment analysis or question answering tasks, to use BERT, the users have to train the model on a separate layer on sentence encodings. However, GPT-3 uses a few-shot learning process on the input token to predict the output result.

On general NLP tasks like machine translation, answering questions, complicated arithmetic calculations or learning new words, GPT-3 works perfectly by conditioning it with a few examples — few-shot learning. Similarly, for text generation as well, GPT-3 works on a few prompts to quickly churn out relevant outputs, with an accuracy of approximately 52%. OpenAI, simply, by increasing the size of the model and its training parameters created a mighty monster of a model.

Whereas, to understand the context of the word, BERT is trained on mask language model tasks, where it randomly masks 15% of words in each sequence to predict the outcome. Similarly, for sentence prediction, BERT is fed with a pair of sentences as input and then gets trained on an added auxiliary task for prediction. Here it processes both sentences involved to predict a binary label of the sentence prediction.

On the architecture dimension, while BERT is trained on latent relationship challenges between the text of different contexts, GPT-3 training approach is relatively simple compared to BERT. Therefore, GPT-3 can be a preferred choice at tasks where sufficient data isn’t available, with a broader range of application. While the transformer includes two separate mechanisms — encoder and decoder, the BERT model only works on encoding mechanisms to generate a language model; however, the GPT-3 combines encoding as well as decoding process to get a transformer decoder for producing text.

While GPT-3 is commercially available via an API, but not open-sourced, BERT has been an open-source model since its inception that allows users to fine-tune it according to their needs. While GPT3 generates output one token at a time, BERT, on the other hand, is not autoregressive, thus uses deep bidirectional context for predicting outcome on sentiment analysis and question answering.

BERT came with a sensational hype when Google released it; however, the hype around GPT-3 model has completely overshadowed BERT’s capabilities. A lot of this could be attributed to the fact that, unlike BERT, OpenAI’s GPT-3 doesn’t require a massive amount of data for training. Such a considerable advancement for a language model has overwhelmed data scientists like no other tool, at least for now.