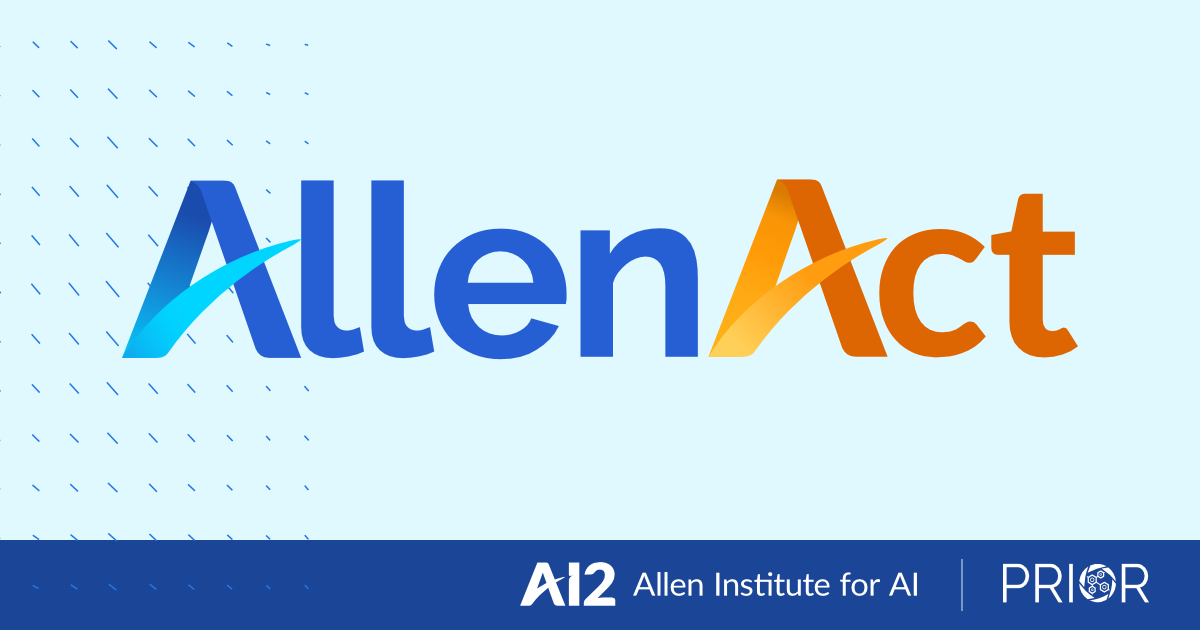 AllenAct is an open-source project and a modular learning framework designed for researchers and technophiles associated with the domain of Embodied AI. It provides state-of-the-art reproductions of numerous embodied AI models. It also supports the expanding collection of embodied AI tasks, algorithms used to accomplish those tasks as well as environments to run them efficiently.

Are you unfamiliar with the term ‘Embodied AI’? Refer to the ‘Overview of Embodied AI’ section of this article before proceeding!

AllenAct was introduced by members of the PRIOR (Perceptual Reasoning and Interaction Research) group at the Allen Institute for Artificial Intelligence (AI2) in August, 2020. AI2 is a non-profit research institution headquartered at Seattle, Washington (United States). It was founded by a co-founder of Microsoft, Paul G. Allen in 2014 with an aim of conducting influential research in the field of AI. (Check out Paul Allen’s personal website here). AI2 is now being led by a leading AI researcher, Dr. Oren Etzioni.

Click here for instructions to install any of these supported environments.

Clone the GitHub repository to your local machine

Move to the top directory

Here’s a demonstration of training an embodied agent on the Point Navigation task within the RoboTHOR Embodied-AI environment.

Before moving on to the implementation, let us have a look at some of the underlying concepts you may be unaware of.

What is a Point Navigation task?

The basic thing an embodied agent must know for accomplishing any task is – how to “move around” in the work environment. This task of moving around is formulated as follows:

Make your agent locate a beacon somewhere in the environment. This beacon transmits its location in such a way that at any point of time, the agent can get the direction in which it needs to proceed and the euclidean distance which it needs to cover in order to reach the beacon. This particular task is termed as Point Navigation (also known as PointNav).

PointNav, though appears simple, is a challenging task for the trained agents to perform. The reason being, such agents are not trained in a free open-space area. Rather, the training is carried out in an environment similar to real-world situations where the agents need to navigate through various hurdles such as walls, doors etc. If they are not familiar with the floor-plan of the environment they have to move in, they need to learn how to predict the design of such structures for proper navigation.

What is an environment?

An environment is something where the trained agent exists and performs actions such as moving forward, turning right and so on.

Here to build a Point Navigator, we have used RoboTHOR simulator. RoboTHOR has been designed to train models that can easily be transferred to a real robot, by providing a photo-realistic virtual environment and a real-world replica of the environment. It comprises 60 various virtual scenes with different floor plans – furniture and 15 validation scenes.

AllenAct has a class abstraction by the name Environment. It is a shallow wrapper which provides a uniform interface to the actual environment the agent works in.

We have used a reinforcement algorithm called DD-PPO, a decentralized and distributed variant of the PPO algorithm. We let our agent explore the environment on its own, reward it for taking actions to approach the goal and penalize it for actions that deviate it from its goal. We then do model optimization to maximize this reward.

We have used the RoboTHOR PointNav dataset. It can be downloaded from here.

It consists of several episodes with randomly generated start and end points for each scene. It also has cached distances between every pair of points in every scene. This helps the agent move in terms of geodesic distance i.e. the actual path distance and not the straight line distance.

A Python library needs to be imported for using it. On the contrary,  AllenAct is structured as a framework with a runner script called main.py. This script runs the experiment specified in a config file. This enables storing minute records of exactly which settings were used to arrive at a particular result. As RL models are generally too costly to train, this facility reduces the expenses to some extent.

Create a new directory under projects/.

Import the required libraries and classes.

NUM_PROCESSES is the total number of parallel processes used to train the model.

TRAINING_GPUS takes the IDs of the GPUS on which the model should be trained.

Likewise, VALIDATION_GPUS and TESTING_GPUS take the ids of the GPUS on which the validation and testing will occur respectively.

Define the paths to store the downloaded dataset

Define the preprocessor to be used with the model

The preprocessor abstraction in AllenAct is designed with models which transform the raw pixels observed by the agent in the environment, into a complex embedding. Instead of the original image, the embedded version is then used as input to the trainable model.

Define the observation inputs to be used by the model

Define settings of the simulator

Define a method that returns name of the experiment

Define a method to return the hardware parameters of each process, based on the list of devices defined above

We take a model from the pointnav_baselines project. It is a small convolutional neural network. It takes the output of a ResNet as its rgb input followed by a single-layered GRU. The number of different actions the agent can perform in the environment is fed to the model through the action_space parameter, which we get from the task definition.

This generates instances of tasks for our agent to perform. It reads the specified file and whenever the agent exceeds the maximum number of steps or selects the stop action, it sets the agent to the next starting locations.

The arguments include the location of the dataset as well as a reference to the distance cache and the environmental arguments for the simulator mentioned above.

NOTE: Training the entire dataset takes nearly 2 days on a machine with 8 GPU!

However, you can train on a smaller dataset simply by changing the dataset’s

path in the above line of code.

Visit this page for the steps to test a pre-trained AllenAct model.

In this article, we gave an overview of a state-of-the-art framework related to the Embodied AI domain viz. AllenAct. We also gave a demonstration of implementing PointNav task using the modular project.

To get a deeper understanding of the AllenAct project, refer to the following sources: