Life on earth began in the deep blue waters. Our common ancestor, of all the living organisms on this planet, can be traced back to the microbes in the deep sea hydrothermal vents. Though the intricacies of this theory are beyond the scope of this article, the role of oceans in the modern era is quite obvious and very well documented.

From absorption of greenhouse gases by phytoplankton to facilitating the majority of the trade across the world, oceans have been a link to all the living organisms on this planet. So, ensuring the normalcy is not an act of altruism but unfortunately an act of dire necessity.

The degradation of coral reefs and the news of dwindling marine stocks have been on the rise. While the masses are busy debating the dawn of Anthropocene, few researchers in the northernmost part of Australia, have been deploying artificial intelligence to prepare a specific database of marine species for marine management.

Darwin, the harbour where the experiment was conducted is home to about 415 known species of marine life, including rays and dugongs. Northern Territory Fisheries have deployed neural networks to identify fish species. Fish blend in with the reef, they blend with the background.

The data scientists had a hard time collecting data due to the water being murky and the marine predators making it difficult for the humans to carry experiments safely.

So the scientists from the Department of Primary Industry and Resources (DPIR) previously attached underwater cameras to buoys in protected reefs off Darwin.

Once the video is collected, terabytes of footage must be viewed, and its content scoured and quantified.

The murkiness of waters made it almost impossible for image classification from the large video files. The researchers have considered only 15 species for the initial training data set. These species are commercially-important as well. As these species are more prone to over-exploitation. As the Northern Territory boasts of high-density healthy populations of fishes and other marine resources supporting customary use, commercial and recreational fishing as well as tourism.

The value of these goods and services produced by the Territory reaches over half a billion dollars each year.

The idea here is to gradually include more number of species that are being monitored and to check if few species really have an impact on the diversity of populations in the harbour.

The new open source AI platform, developed in association with Microsoft, is an attempt to automate the exhaustive process of counting local fish stocks by progressively learning to identify different varieties of fish.

The scientists have integrated cloud computing with AI to come up with solutions specific to their marine applications. The data being large and the tasks being mundane, it is both tedious and inefficient to manually identify the fish species.

The researchers deployed Microsoft’s Azure services for their first month of experiments. This helped in deploying the solution in a record time of six months.

And, the accuracy scores have shot up tremendously. The researchers claim that their machine learning model is now capable of identifying the species with more than 95% accuracy.

So, this saved up time is being put to best use by the researchers in forming insights about the data that have significant environmental and economic impacts.

Marine micropaleontology is a sub-domain which is garnering interest of late. Recently, a paper was released by the researchers at IIT Bombay in collaboration with other reputed institute have used convolution neural network for their image classification tasks, in which they claim to have detected organisms at the microscopic scales in spite of having various factors clouding the view under the sea. 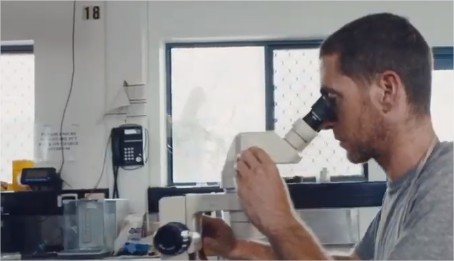 Technologies such as these, especially with regards to oceans, definitely will have huge benefits to India; surrounded by sea on three sides. And, with increasing release of pollutants and decreasing fishing stocks, India is taking measures to control this from aggravating. In early 2018, the Automated Ocean Observatory got Rs.100 crore in funding. Though the inclusion of AI in Indian marine scenario hasn’t made much of noise with use cases as that of Darwin’s port, AI is poised to aid researchers into making more efficient moves with regards to conservation of the marine ecosystem.

The consequences of inshore mechanised fishing, sewage dumping and other man-made effects have had a severe impact on the marine ecosystem. And tackling such colossal damage requires detailed data collection and reliable data processing methods. The enhancement of cloud computing and algorithms has reduced the problem from technical impossibility to just a choice of being proactive or not.

The project undertaken by NT Fisheries with the help of Microsoft has already started to turn heads, at least in the surrounding fishing departments in Australia. Now it is only a matter of time before this open sourced project gets implemented at global scale.