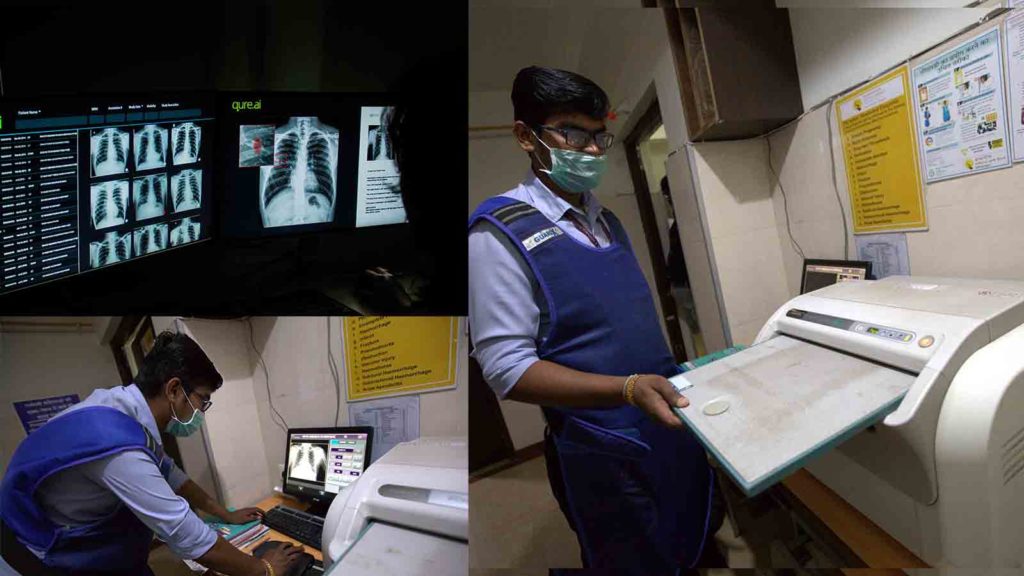 Tuberculosis or TB has remained one of the world’s most infectious diseases, responsible for more fatalities than HIV and malaria combined. Across the globe, TB has reached epidemic proportions affecting more than 27 lakh people annually in India alone. The shortage of healthcare specialists exacerbates the problem in rural regions and for people below the poverty line, who are a huge participant in the significant growth of TB cases in India.

Case in point — the city of Nagpur in Maharashtra, one of the most populated cities in India, has the highest incidence of tuberculosis, with 35% of the population infected. The community in slums primarily leverage informal healthcare providers, which are although accessible and affordable, have limited awareness and diagnostic tools for TB detection. Thus, the goal was to reduce the diagnostic delay and effectively employ these healthcare providers to increase TB detection in the city.

Qure.ai’s AI-based Detection To The Rescue

TB is a curable disease; however, to make it work, it requires early detection for doctors to start their treatment. But, with a shortage of healthcare providers for testing and detecting the disease, the whole process of treatment gets delayed, resulting in an increasing number of infected patients. Therefore, to reduce the diagnostic delay, Qure.ai, an AI company focusing on the healthcare domain, collaborated with PATH, a non-profit organisation to deploy an AI-powered solution at these healthcare and diagnostic centres in Nagpur.

Explaining the solution, Reshma Suresh, the operations head at Qure.ai stated, qXR is an AI-based chest X-ray interpretation platform that has been designed to provide a comprehensive analysis of lung abnormalities. The AI model has been trained over a million curated X-rays data, and thus can now accurately detect 29 different, clinically relevant abnormal findings. “The model has been highly optimised for identifying classic as well as atypical pulmonary, hilar and extrapulmonary tuberculosis,” said Suresh.

While qXR, developed by Qure.ai is a mass screening tool for TB, it can also be used as a surveillance tool. In the systematic screening setting, chest X-rays can be used for mass screening of the symptomatic, at-risk or vulnerable population for active TB. “As the X-ray is captured, qXR automatically processes them and provides a definitive indication on signs of tuberculosis within a minute,” said Suresh. “The presumptive cases are, however, subjected to bacteriological confirmatory results within the same or next day.”

She further added, in a surveillance setting, qXR processes all incoming X-rays of individuals,  symptomatic or not, and alerts on X-rays with a positive indication for further proceedings. “With such a capability, it empowers the frontline healthcare providers, especially in resource-constraint areas, to make better decisions reducing the time to follow up cases.”

The company utilised the X-ray dataset, and the labels automatically inferred from the radiology reports for developing the algorithm. Further, they used deep learning to train convolutional neural networks that form the building blocks in the system to detect the lung abnormalities. The system of around 150 deep learning models has been designed to predict the likelihood of tuberculosis infection from the pixel data of a Chest X-rays.

The AI encapsulated inside qXR allows automatic reading of chest X-rays which generates reports within seconds. This advanced technology, irrespective of having CR/DR scans or PA/AP views, can detect multiple findings with the lungs, pleura, heart, bones and the diaphragm.

The algorithms generate contour lines for lung and pleural abnormalities for quick and easy diagnosis. Integrated with multiple picture archiving and communication systems, the AI system provides the output under a minute for each scan. Further, the text report generated by the system can be pushed back as structured DICOM reports for immediate adoption in the workflow.

The dashboard will provide a sidebar for all the findings presented in a dichotomised fashion. The AI system — qXR — can also analyse multiple scans from the same patient sequentially in order to create a progress report to predict and detect changes in lesions over time.

Designed for real-world setting, this advanced AI system is not only hardware-free but also is a zero-footprint solution. With maximised sensitivity and specificity of qXR simultaneously, the software achieved a sensitivity and specificity of 71% with 95% of confidence intervals: 66%, 76%; and 80% with 95% confidence intervals: 77%, 83%, respectively. On the other hand, for detecting pulmonary tuberculosis, the system showcased an accuracy of 0.94 (95% CI: 0.92, 0.96) and 0.84 (95% CI: 0.82, 0.87), respectively for the area under the curve.

Also Read: Will Scan Based AI Systems Be Useful In Diagnosis For COVID-19?

Wrapping Up With Benefits

When asked about the benefits of this deployment, Dr Shibu Vijayan, Global TB Technical Director at PATH stated that the program by PATH in association with Qure.ai was aimed to establish a bridge between private healthcare providers and public health systems.

“The program showed positive outcomes with an overall 20% increase in the notification of TB cases compared to the previous year,” said Dr Vijayan. “Of which 13% has been attributed to qXR on improvement in the cases identified, who would have been missed otherwise with human involvement.”

Further to this, there also has been a 50% increase in the proportion of bacteriological confirmations in the city through the program by PATH. Addressing the growing threat of tuberculosis, this system could be of great use to many rural healthcare providers who are looking to reduce the time lag of TB diagnosis for the doctors to start the treatment.