How The Big Four Dodged Pandemic And Made Record Earnings 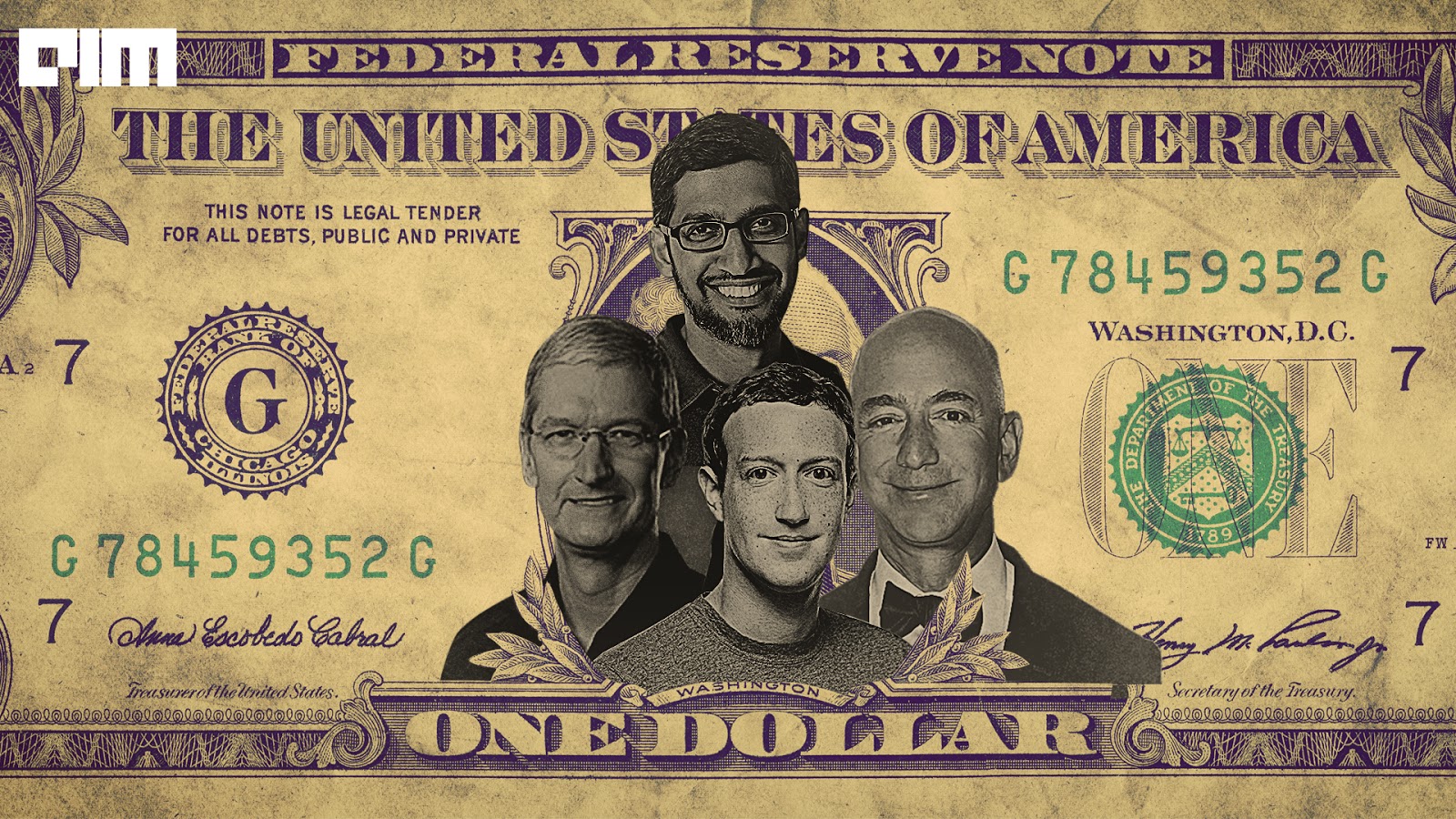 “The big tech is banking heavily on AI, Cloud and 5G technologies to retain customers and drive growth”

A global emergency can smother your business, government lawsuits can break your company, competitors with trillion-dollar market value can wipe your organisation off the map. But what would happen when all three come together in the same year? Many would go extinct. But, not the big tech. The pandemic brought the world to a standstill. The internet giants, however, came out of it unscathed. Apple, Amazon, Google and Facebook, popularly known as the big four, have not only survived a combination of calamities but registered profits and left the Wall Street analysts dumbfounded. Last week, these four companies, along with Microsoft, released their quarterly reports. One common theme across the companies is their increased use of AI and cloud services.

“Most of Apple’s features are extensions of federated learning in a way.”

Between January and March, Apple sold iPhones worth $47 billion, a 66% jump from the previous year. Apple has departed from the good old Intel chips and launched M1 chips, a more powerful processor for machine learning and high speed 5G functionalities.

“This is a huge leap for iPhone, bringing the best 5G experience in the market and delivering our most advanced technologies to users who want the absolute most from their iPhone,” said Greg Joswiak, Apple’s senior vice president of Worldwide Marketing. The phone maker has also locked horns with Facebook over customer privacy. Apple claimed their new privacy labels would inform its users on who is using their data. Targeted ads are a staple for companies like Facebook. They make billions off it. But, Apple’s concerns over the social networking sites alleged practices that put user’s privacy at risk. Apple uses federated learning and differential privacy techniques to keep the user’s data anonymous while leveraging it for analytics.

App Tracking Transparency, launched with iOS 14.5, is Apple’s new privacy feature that requires apps to ask permission to track you. Users can also turn off tracking for all apps by default. According to reports, 96% of iPhone users in the United States have opted out of app tracking on iOS 14.5. This shows that Apple’s ML-propelled privacy initiative earned the customers’ approval. According to the ML researchers at Apple, processing on end-user devices instead of server-based processing is a valued approach in enabling end-user privacy. This strategy extends to many of Apple’s ML solutions, such as text prediction in keyboards. The ability to personalise towards a user’s diction is highly desirable. Like its counterparts, Apple is banking heavily on AI and chip innovation to drive growth and trust.

Amazon started its year with the news of its founder Jeff Bezos stepping down and Andy Jassy, the current CEO of Amazon’s profit engine, Amazon Web Services (AWS), picked as his replacement. AWS’ net sales climbed to $13.5 billion this quarter, up 32% year over year. Amazon doesn’t disclose advertising sales, but it’s included in its “Other” category, which saw revenue growth of 77% year over year to $6.9 billion. Amazon Web Services dominates more than one-third of the global cloud infrastructure. AWS leverages its global network of servers to handle and route the massive spikes in traffic on Prime Days. AWS makes short-term, large scale global events like Prime Day technically feasible and economically viable. AWS has not only brought profits from outside, but the services have even revolutionised the in-house business. For example, the much-hyped “Prime Day” is a multi-billion revenue generator. In 2020, the two-day event saw sales surpassing $3.5 billion worldwide.

AWS powers many top internet companies in the world like Netflix. The cloud service company has outclassed its competitors for over a decade now. AWS’ wide range of AI, ML, and even quantum computing services will continue to drive revenues for Amazon.

Google’s parent company Alphabet reported revenue of $55.31 billion. Google’s revenue rose 34% compared to the previous year. The search giant reported advertising revenue of $44.68 billion, which is a significant rise from $33.76 billion in the same quarter last year. The pandemic has moved many from cubicles to couches, and the streaming sites have seen a spike in their revenue. YouTube has reported strong growth with its ads drawing in $6.01 billion during the quarter — a 49% rise from a year ago. YouTube uses state of the art recommendation algorithms to keep the viewers busy. The streaming site has also recently announced that it uses custom-made chips or VCUs to stream high-quality content. Like Apple, Google too has padded up their services to accommodate user’s privacy. Earlier this year, Google announced that it would ditch third-party cookies on the Chrome browser. The cookies, used for targeted advertisements, will be replaced with browser-based machine learning. The ML models on the browser will skim the user history and weave a network of people’s interest (think: recommendation engine) to be used for advertisement. A couple of months ago, Google announced that it would be investing $7 billion for expanding offices and data centres across 19 states, which will employ at least 10,000 people, indicating how well the company has performed recently.

Despite the Capitol riots and its tussle with the Australian government, Facebook reported revenue of $26.17 billion for the quarter, and the net income grew 94% to $9.5 billion, from $4.9 billion a year prior. Facebook’s CEO Mark Zuckerberg said more than 1 billion monthly active users visit Facebook’s Marketplace service, where users can buy and sell goods. Facebook has been in the spotlight for misinformation and tracking users for a while now. The company uses research coming out of its FAIR labs to moderate content for hate speech and misinformation. Also, machine learning has been vital to Facebook’s recommendation systems which connect entities with similar interests (read businesses).

Facebook’s “Other” category recorded a revenue of $732 million for the quarter, accounting for nearly 3% of Facebook’s total revenue in the quarter. This “Other” category includes sales of Oculus virtual reality headsets and Portal video-chatting devices. Facebook has been bullish on mixed reality for a while now. For instance, Facebook Reality Labs’ wearables use electromyography (EMG) to translate nerve signals in the wrist to digital commands. “Take the QWERTY keyboard as an example. It’s over 150 years old, and it can be radically improved. Imagine instead a virtual keyboard that learns and adapts to your unique typing style (typos and all) over time,” said the company in a blog post.

Facebook’s chief Zuckerberg even wants to use this VR technology to combat climate change; he believes a near realistic virtual world will cut down commutes and hence emissions!

What’s next for the Big Four

Google, Apple and Amazon have made their autonomous ambitions clear, with Apple joining late to the party. While Google’s Waymo is still running at a loss, Apple’s self-driving car is eyeing a 2024 launch. Amazon’s recent purchase, Zoox, a company that makes robotaxis, is doing trial runs. Facebook, however, is investing heavily in taking augmented reality to the masses. While Apple is gearing towards chip autonomy, Google and Amazon are serious about customised silicon too. Google’s TPUs are already powering its data centres. Now Amazon wants to power AWS data centres with custom made chips such as Trainium.

That said, the fate of big tech currently is in the hands of the regulators. The big four have come under scanner in India, Australia, the EU and the US. The EU has especially been stringent with the antitrust laws. Recently Apple was served with one. Google and Facebook have been accused of backdoor ad-rigging. Amazon has a few of its own. The biggest one being its challenge of the US defense for choosing Microsoft’s Azure over AWS for a $10 bullion cloud contract. These early skirmishes have already influenced how these companies run their businesses. Federated learning and Responsible AI are few such domains that have witnessed growing interest recently. Autonomous cars, custom made chips, privacy-padded ad services will be the areas critical to the success of these companies soon.