How To Use GANs When The Training Data Is Unlabelled

With the publication of this paper in 2014, applications of GANs have witnessed a tremendous growth.

GANs have advanced to a point where they can pick up trivial expressions denoting significant human emotions.

Celebrated computer scientist and Turing award winner  Yann Lecun observed, “GANs and the variations that are now being proposed is the most interesting idea in the last 10 years in ML, in my opinion.”

GANs are powerhouses of unsupervised machine learning. They are deployed to draw insights from the data, which is unstructured and is without any specific target value.

As machines depend on training data to produce results, labeled data enables finer tuning of the results.

Since, data is vast and usually unlabeled and the features are of uncertain correlations, the machine learning researchers have been building models with techniques which can be taught how to learn and then teach other models about the rules and ramifications of converging at a result.

Unsupervised semantic feature learning trains the convolutional neural networks with the features of an image by tasking it with predicting the angle of rotation of the image.

The intuition is, for a model to perfect this prediction, it needs to be able to recognise the content of the images like their shapes etc. 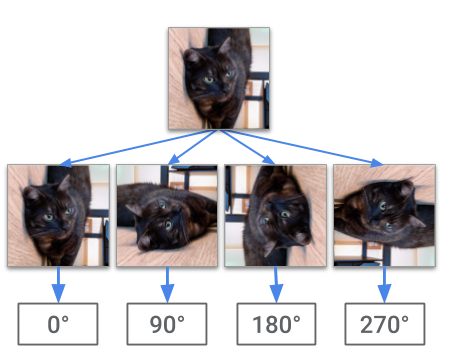 The linear classifier is trained on the discriminator network’s feature representation to predict rotations of the rotated real images and rotated fake images. The corresponding difference in the angles predicted are added to the discriminator and generator losses.

One of the intermediate layers of this newly trained network is taken as new feature representation of the input.  A classifier is trained so that it recognises the label of this new input feature. Since the network has gained few skills from its rotation prediction previously, the classifier need not be trained  over entire network.

In order to maintain the consistency in the quality of the images that are generated, Frechet Inception Distance(FID) is used to measure the quality. Lower the FID, the better the quality. In other words the similarity between real and generated images is close.

The above illustrates how the network produces an image by performing interpolation on the latent(hidden features) vectors of the leftmost and rightmost images.

The above techniques show a significant improvement in the results of conditional GANs even with large scale training.

The success of this model will encourage more research into self and semi-supervised machine learning algorithms.