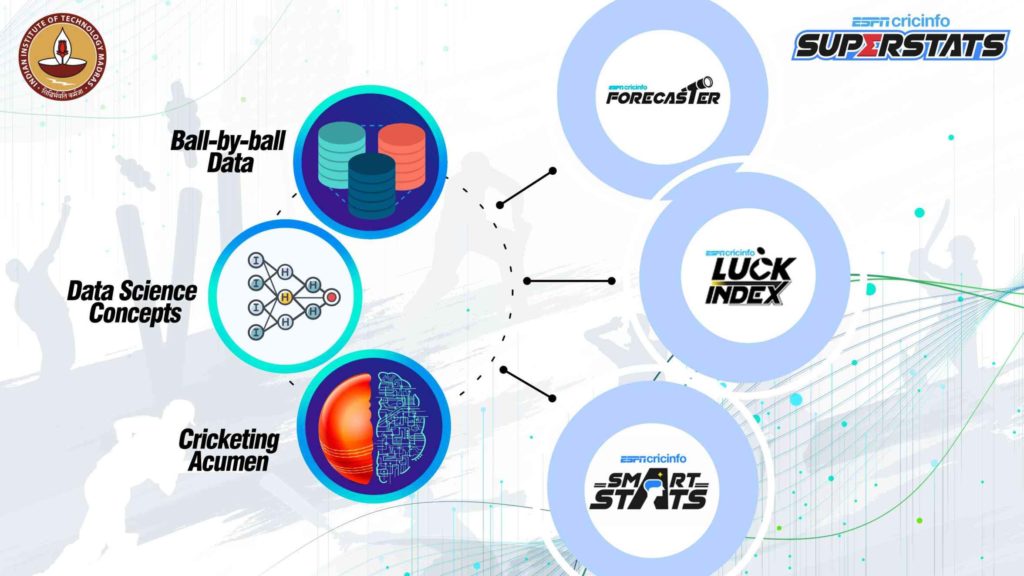 Artificial intelligence-powered tool, ‘Superstats’ by Indian Institute of Technology Madras and ESPNcricinfo is enhancing the experience of Indian Premier League (IPL) matches for its fan by providing a context to every game event in a game and also provides insights into factors such as ‘luck.’ It uses data science to enable the same.

Superstats takes into account the context of every performance, batting and bowling. Context includes pitch conditions, quality of opposition, and match situation – in terms of the pressure on the player.

The AI Engine leverages the rich data collected from over a decade-old ESPNcricinfo’s ball-by-ball updates.  The work was led by Prof. Raghunathan Rengaswamy and Prof. Mahesh Panchagnula of IIT Madras along with the ESPNcricinfo team.

The AI tool was developed in 2019 through a collaboration between ESPNcricinfo, IIT Madras and Gyan Data Pvt. Ltd., an IIT Madras-incubated company. It is a suite of metrics that helps fans judge performances in limited-overs cricket – T20s and ODIs – in a far more nuanced manner than conventional metrics do.

It has a feature called ‘Forecaster’ that can predict the final score of an ongoing inning and the win probabilities of teams using statistical and machine learning models. The predictions take into account several factors including the current run rate, number of overs and wickets left, quality and form of the players.

It also features a first-of-its-kind concept in cricket analytics called ‘Luck Index’ that quantifies the impact of lucky events (such as dropped catches and umpiring errors, among others) on the final score and match result.

The ‘Smart Stats’ is a set of three novel metrics – Smart Runs, Smart Wickets, and Impact Score – that factor in the pressure on a player and opposition quality for evaluating batting and bowling performances.

“Superstats was a significant part of ESPNcricinfo’s stats coverage of IPL 2019 and will be a key ingredient of the 2020 plan as well. Since it is a bouquet of offerings, these stats metrics will enhance all aspects of coverage: pre-game, in-game and post-game,” said S. Rajesh, Stats Editor, ESPNcricinfo.

Superstats is derived from ESPNcricinfo’s database using complex algorithms based on machine learning. The algorithms process accurate, fast data, quantify the impact of luck and analyses the real value of a player’s performance in the game of cricket in real-time.

“It has been a wonderful experience to be a part of this effort from IIT Madras. These kinds of projects also reaffirm our faith in the universality of the machine learning and data science techniques that we develop and its application potential in multiple fields,” said Prof. Raghunathan Rengaswamy, Dean (Global Engagement), IIT Madras.

It is to be noted that these data science algorithms use forecasting methods that train on past data to uncover trends and patterns during different periods of play and adapt based on actual match data resulting in highly accurate predictive models.