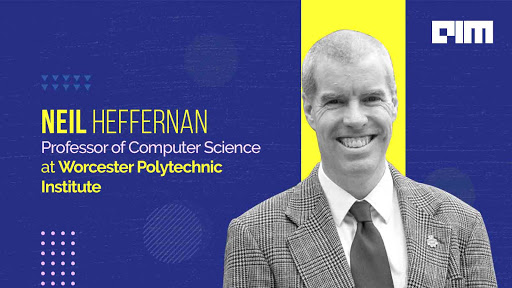 Neil is renowned for developing the computer tutor, Ms Lindquist. In this interview, Neil shares his thoughts and vision for data science education.

Also Read: Experiential Learning Is Not An Afterthought

AIM: What are your views on the booming data science education market?

Neil Heffernan: It does seem data science education is growing, and a lot of this could be attributed to the pandemic. The interest is in better understanding what is happening with students as their online behaviour is only going up as more and more students are doing stuff and learning online. So in one sense, I’m somewhat bullish on this.

I got my PhD in computer science in 2001 from Carnegie Mellon, and compared to that, AI is getting better because the data is getting better. The combination of algorithms and good datasets is pushing AI and data science. Currently, there are really cool data, neural techniques like LSTM (long short-term memory), which we didn’t have 25 years ago when we were training neural networks. And that’s an actual cool improvement. So, I think that to a large degree, data science is taking off just because we have datasets like this.

I can hand my students 60,000 images of digits in English and ask them to pull down TensorFlow and exit fit, a neural network, can do a pretty good job of predicting which image represents which number. Alongside, technology has also made things easier. The fact that Google gives away TensorFlow makes it extremely easy for me to tell random undergraduates to pull out calculations. So you know, technologically speaking, we’re making things easier for people.

AIM: How does a university instrument a data science and analytics course? What sort of changes universities are required to bring post-pandemic?

Neil Heffernan: I guess I’ll challenge the premise of the question, which is — I don’t think most universities are bothering to instrument their classes. Most universities are still totally old school and are lecturing their students in an old-fashioned way about this dynamic new field.

In that way, what makes me kind of unique is the tool and infrastructure that I’ve built out: ASSISTments currently has half a million students. It works on interesting algorithms and data science to help teachers and universities create a feedback-based distance learning environment. While I teach artificial intelligence at the graduate and undergraduate level and use this methodology for the students, I don’t think, at the university level, most institutions are doing anything interesting. To a certain extent, for analytics courses, I can think of a few universities that seem to be trying to do something innovative. But at least in America, I don’t think we are responding very well to these challenges. And, a lot of this could be attributed to our attitude of being complacent. I mean, it’s really easy to lecture students with various courses without really paying attention to whether they are learning.

I believe paying attention to students’ data is real work. To answer your questions as to the most significant challenges a university faces — only a few universities have made a serious commitment to paying attention to data, rather than left to the whims of individual professors to decide to use data. And maybe the universities are facing challenges in utilising students’ data to create a more comprehensive learning environment.

We have 20,000 (from 1st grade to essentially 10th grade) math teachers here in America who use my tool/website daily to get feedback on students’ learnings. However, probably half of them don’t look at the students’ data to transform their instruction. Similarly, when you think that big universities and institutions don’t use analytics to instrument their courses, it gets quite surprising.

It’s not wrong; however, it’s really hard to change teachers, their behaviours, and how they are used to doing certain things. Changing behaviour is hard! And so it will be a long, hard road to get teachers, universities and institutions to realise we start every lecture without actually reviewing what did the students learn from the last one. One needs to know about student understanding before we lecture them again on these competitive subjects.

AIM: How can governments encourage more students to select data science subjects? What role do corporations play in the same?

Neil Heffernan: So the government and corporations are two different entities, so maybe we’ll deal with them separately?

Should the government encourage more students to select assigned subjects, like data science and artificial intelligence? Certainly yes! It’s certainly the case here in the United States, and I’m guessing it’s true in India as well.

Typically, I get a lot of money from the National Science Foundation to teach more students artificial intelligence because we kind of know that’s where the jobs are. That’s where Google and Apple, and all other big tech giant jobs are, and that’s why governments don’t put as much money into the humanities and other fields. Case in point — I recently received, probably, one of the largest amounts of money NSF can give out, i.e. $20 million for an AI centre, where I am one of the principal investigators. NSF and the US government are all big on this right now.

Coming to the part where corporations are encouraging more data science, and I believe indeed they should. Every corporation is spending a lot of money doing some data science for their business. While data science is a vague term, I see every company doing an insane amount of AB testing, aka randomised controlled trial, or RCT, for their web-based application or product development. Typically, most computer scientists don’t know how to run an A/B test and tend to be only kids graduating with a psychology degree or data science degree who know how to do the simple statistics necessary to analyse an experiment. Microsoft and Google are running thousands of A/B tests every day and making tiny little improvements or some sizable improvements to their products. Thus, surging the demand for such professionals on a daily basis.

AIM: What are the major obstacles data science and analytics education are facing currently?

Further, school systems worry that Google might only sell ads to their kids; thus, they write contracts such that all students’ data gets destroyed. Thus, experimentation without student data isn’t possible and is definitely not a norm.

One of my colleagues who worked at Pearson Publishing company reported on an experiment figuring out ways to improve students’ learning and motivation by doing some Carol Dweck inspired “mindset theory” to get students to have the right mindset about solving math problems. Instead, Education Week wrote some nasty articles about what an awful evil entity Pearson is for running an experiment on students. I think the biggest obstacle in data science education is not understanding the students’ mindset.

Currently, I have approximately 103 experiments running on my platform.

AIM: What is the prospect of AI and big data analytics education in the future?

Neil Heffernan: The prospect can only be created if we actually could start learning what works, for whom, at scale, for real, so that we can make slow improvements in our teaching paradigm. It is critical to understand the types of learners in these dynamic fields and what can be done. We could engage in what will be a slow and laborious process to fill the gaps in boasted theories and engineer better systems over time. And I’m once again very bullish on that.

Also, I don’t think this is a sort of thing that some Silicon Valley company will solve for us. And even if they did, it wouldn’t help us understand the science of students’ mindset by deploying one product from one company that people think will do a good job. Many companies would like us to believe that they have figured out how to do personalisation for better data science education; however, none of them has. It’s going to take us actually 50 years to get very good at this. I think the prospects are positive, but it will be a slow and laborious process.

AIM: Who should seek a career in data science? What does the future look like for someone who embarks on it at this time?

Neil Heffernan: Just about anyone who thinks data and numbers sound interesting should pursue a data science career. I believe that students should try to stay as technical for as long as possible. And, that’s the whole reason I teach computer science, learning science and data science. And, we need real programming skills in our data scientists.

The future is insanely optimistic for professionals and enthusiasts in this field. The upcoming graduates and students are already building products and systems that have an enormous possibility to change the world quite dramatically. And hopefully, for the better. Therefore, I can say that data scientists’ future is very optimistic, and thus, more and more students should pursue mathematics, analytics, and data science courses. So people reading this article should be encouraged to learn some of these programming and data science skills and try to put them to work.