In Conversation With Sunil Gupta, The ‘Data Centre Man of India’ & His Take On Storage & Infrastructure Trends 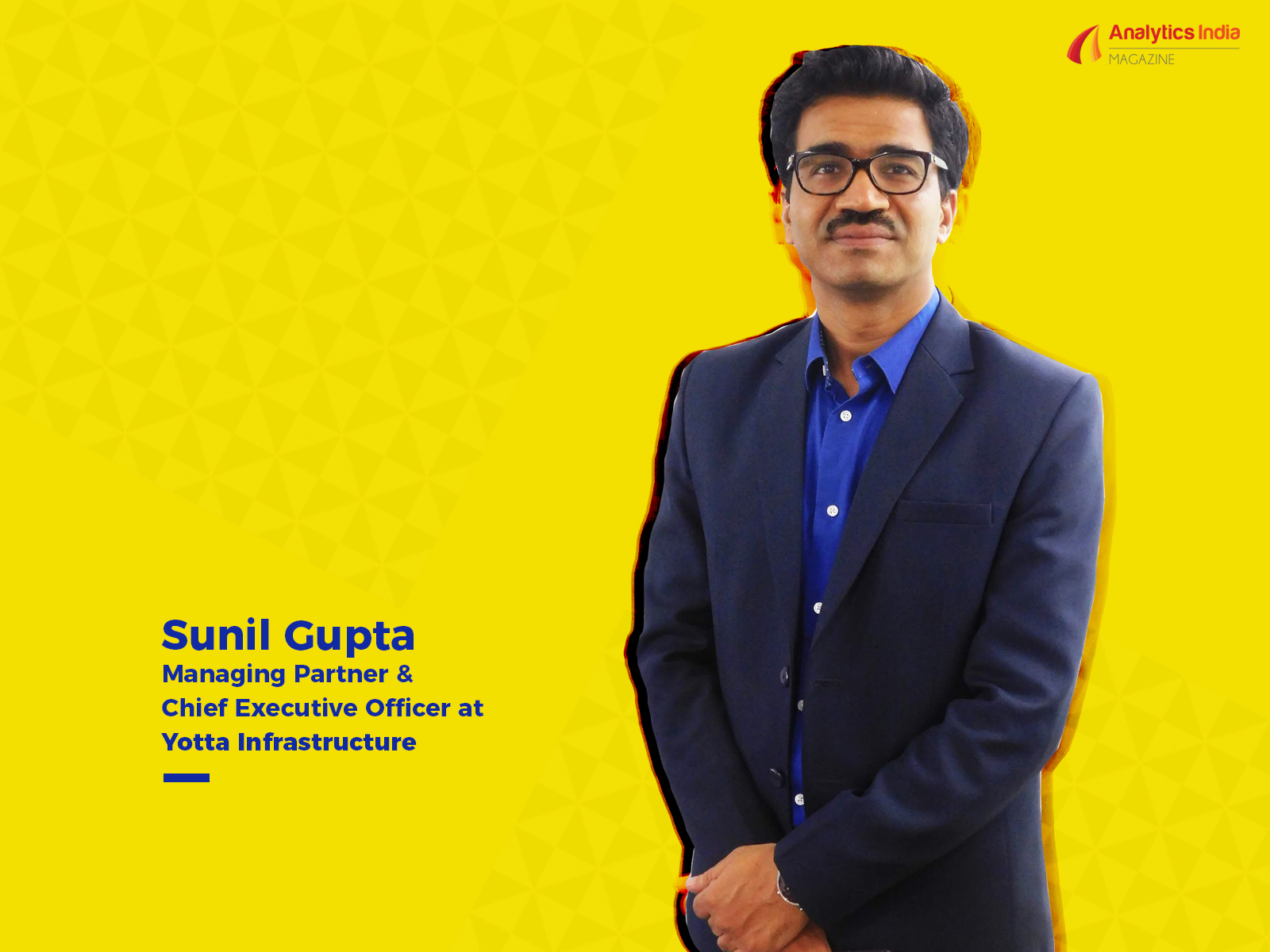 Mumbai based real estate & construction major the Hiranandani Group recently made headlines in the tech sector by announcing their foray into the data centre space with their 100% subsidiary – Yotta Infrastructure Solutions. Yotta will be a managed data centre service provider that will design, build and operates large-scale hyper-density data centre parks in India.

Heading Yotta Infrastructure now is Sunil Gupta who is known as the ‘Data Centre Man of India’. He brings a rich experience of 27 years and a proven track record of building 15+ hyper-scale hyperdensity data centres. He was previously associated with Netmagic as the president, COO and executive director. At Yotta he serves as the Managing Partner and Chief Executive Officer.

Analytics India Magzine got in touch with Gupta to get an understanding of his ambitious plans behind setting up data centre parks in India. Here are the interview excerpts:

Analytics India Magazine: How has the data centre market in India grown over the last decade or so?

Sunil Gupta: The data centre market in India has grown drastically in the last 20 years. Two things that have driven its growth are data and cloud computing. The growth of data is internally linked to a lot of market drivers such as the evolution of 4G and 5G, cheap data plans, wide access to smartphones, high-speed internet and more. These factors have resulted in a lot of data being created and consumed by the users. This entire data is getting stored, analysed and computed somewhere and that place is nothing but a data center. Growth in the data centre can also be attributed to an increase in the growth of industries such as e-commerce, banking and more. This has resulted in data growth by 70% year-on-year. This is leading to huge consumption of data centres and the need for companies to have underlying IT capacities to support data growth.

AIM: How are companies which are moving from captive data centres to cloud computing affecting the data centre business in India?

SG: Most enterprises used to run their applications in their own captive data centres up until a few years from now. They owned and operated these data centres within their own office premises. However, in the last few years, there has been a significant increase in the use of public cloud services which has prompted all major hyper-scale cloud companies to set up their grids in India. Subsequently, this has ensured better performance thereby reducing latency and in-turn has led to phenomenal growth in the third-party data centre business.

AIM: How did the idea of starting Yotta conceptualise?

SG: All trends indicate that data growth is not slowing down anytime soon and this means more demand for scalable data centres in the country. Till now we have been only been talking about humans consuming and creating data. Once machines start creating data through emerging tech such as IoT, AI and ML, the growth of data will be humongous. The demand for data centre capability is going to be practically unlimited. I could realise this from my previous assignments that as data centre players, we need to provide unlimited scalability along with a scalable power infrastructure in the same campus to benefit existing customers. This is how the concept of Yotta Data Center Parks was born. Since the Hiranandani Group has large land banks and they are also into power generation and distribution, it was a natural extension for them to acquire datacentre expertise and foray into this space. This is where I and my team come in.  With their resources and my data centre domain knowledge, we had all the dots connected and that’s how Yotta came into existence.

AIM: What are the larger goals for Yotta in the coming future. What is the roadmap and what do you plan to accomplish for Indian analytics ecosystem through it?

SG: Analytics workload and use cases including that of AI, ML, IoT generate and needs a huge amount of data. To make Yotta a commercial success we aim to provide the right kind of infrastructure to run analytics functions in a cost-effective and viable way. India needs humongous investment into data centre infrastructure to run these use cases be it analytics, AI, ML or IoT. Our investment in data centres is a way to make analytics functions successful. Right now we have data centre blueprint in Navi Mumbai, Mumbai and Chennai. Our end goal is to make large data centre parks to be used by analytics applications. We also aim to provide a complete range of IT services for customers to be able to use cloud and other value-added services apart from running analytics workload.

AIM: Tell us about your funding journey.

SG: Our initial project funding is from the internal accruals from the Hiranandani Group, and debts raised from banks. We don’t have immediate plans to raise funding because internally we are self-sufficient. But considering our plans to scale up the business in future we don’t deny the possibility of getting a partner or funding in the future. But not at this stage.

AIM: What will be the scale of data centres that you are planning to launch?

AIM: What are the challenges you face while scaling up or making yourself relevant in the market?

SG: Typical challenge of coming as a new service provider is the competition with existing players who may not be very large but have been in the market for a couple of years. While the concept of Yotta may be new, the fact that we have the backing of Hiranandani and the resources in place, we are confident about our venture. Another plus point we have is that I and my team has been in the data centre business for the last 20 years. Practically I started this business in India. I have seen this industry grow from smaller scales to the scale which it is today. We have the resources and domain knowledge and the promise that Yotta can deliver better than existing players. Challenge now is to convey benefits to the end customers.