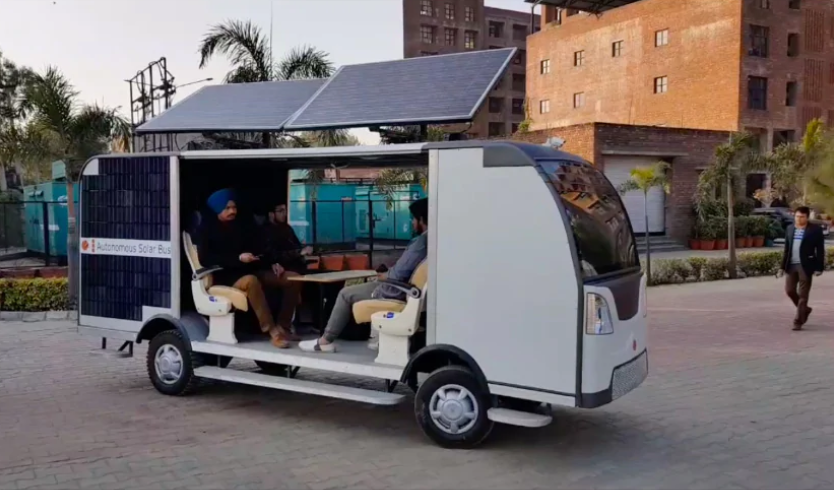 In the wake of driverless cars by automotive giants like Tesla, India is heading its way to driverless vehicles costing only 15 lakhs. Honda, Toyota, Volvo, Hyundai are among many others that are gearing up to launch their self-driving cars. According to a prediction, autonomous cars will kill new car sales. By 2040, 14 percent of new cars sold will be fully autonomous, according to the report, and about one third will be “semi autonomous.”

How Is This Different

All the autonomous cars that have been made in the world have run on petrol, diesel, CNG or use grid-based electricity to charge. This new autonomous car is based on solar power, and therefore naturally has several sets of advantages over the rest autonomous vehicle inventions of the world. There is also absolutely no autonomous vehicle that is built on 15 lakh like this bus. The bus is charged using solar panels that line the vehicle. The bus is supposed to sense its surroundings and the road and drive itself. The panels can generate two kilowatts of power and help charge the six lead acid batteries that it is equipped with. The bus charging is so strong that it can sustain to run for upto 70 kilometers in one charge.

The 1,500 kg bus can accommodate up to 10 to 30 people and can be used inside closed campuses. It has a speed of 30 kilometers per hour and uses Bluetooth and GPS for the purpose of navigation. The bus can be used to control over a radius of 10 kilometers. They can be deployed to places which need low-range pollution free vehicles like airports. The price of this driverless bus might set a good benchmark for commercial automakers for the upcoming months.

The project group which made this driverless solar powered bus had previously, in the year 2014, built a driverless golf cart and they thought to built this driverless vehicle this year. The whole project of the driverless bus took a year to complete.

About 300 students and 5 faculty members fabricated the bus at the workshop, within the University campus. The students from mechanical, computer and electrical engineering with assistance from professors of the college.

The vehicle was showcased at the 106th edition of the Indian Science Congress (INC), which was inaugurated by the Indian Prime Minister, Narendra Modi. A student from the University, Muskan, who has helped in the technical background of this driverless solar-powered bus said that they used some of the sensor flow in order for the bus to see its own path and move accordingly. There has been a lot of talk and even incidences of the self-driving cars posing a threat and causing severe accidents. Talking about the dangers posed by them, she said, “I have given data on accidents so that it can learn from the previous data and act accordingly.”

The makers of the bus plan inaugurating the on-road version of the bus by the end of the year. When asked whether the new invention will compete with Google’s and Tesla’s autonomous vehicles, Mandeep Singh, Project Lead of the Autonomous Bus said, “Not right now. They have expertise at Tesla. We can’t compete with them at this stage, but I will not hesitate to say that in the coming years we will be among their competitors,”

Although the car does not compete with the other giants inventions of autonomous vehicles, it sure is a breakthrough since it is uses solar power, and the country should look forward to these buses taking over our city roads.