Inside The Intensely Collaborative Community Of Magento Developers 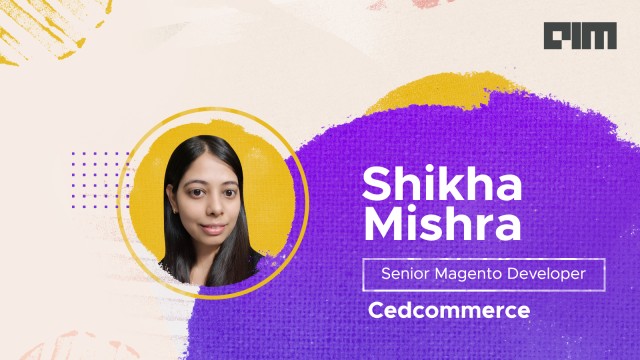 Magento is one of the oldest and most popular open-source eCommerce CMS platforms. Shikha Mishra is one of prolific contributors in Magenta’s open-source community. She is currently the Lead Developer at Cedcommerce. She has been working with Cedcommerce for the past six years and is also an active maintainer at GitHub. She mainly works on Magento. She was also featured in The ReadMe Project by GitHub, where she described her experience as an open-source contributor.

Analytics India Magazine caught up with Shikha Mishra to get insights into her coding journey.

Shikha Mishra: From a young age, I wanted to be independent and wanted to pursue a career that would challenge me, persuade me to keep learning new things and allow me to grow both professionally and personally. So I started coding in college. At first, it was to upskill me, but as I went on, my interest grew, and I decided to pursue coding as my profession. The best part about open source is that it allows everyone to contribute and build on each other’s work, minimising errors.

My current responsibilities at Cedcommerce include extension development, core bug fixing, customisations, and the development of Magento-based e-commerce solutions as well as front-end technologies such as React and Angular. The open source version of Magento on which I work is highly customisable, popular in India, and perfect for developers, organisations, and small merchants just starting out.

AIM: What is Magento? How does it work with artificial intelligence?

Shikha Mishra: Magento is an open-source eCommerce framework written in PHP. It has been utilised by many small and large enterprises to create their e-commerce websites. Magento websites are used by top brands like Ford, Nestle, and Land Rover.

AIM: What does it take to become a Magento developer?

Shikha Mishra: If a developer is already familiar with PHP and OOPs (Object-oriented programming system), I suggest installing the Magento open-source version and customising it; that’s the best way to become a Magento developer. If not, one can start learning PHP and OOPs first and then work on the open-source version of Magento. In addition, there are several blogs available regarding the architecture of Magento code, so one can easily find step-by-step guides online.

AIM: Tell us about Magento’s prospects.

Shikha Mishra: I believe Magento has a bright future. It releases new updates and security patches every few months that make it very secure. Also, a lot of new projects have been added in recent years like support for GraphQL APIs. Headless commerce support with PWA Studio and all the other features are available even with the Magento open-source version so the community can utilise these new features free of charge, which makes it very suitable for small and medium-level merchants.

The Magento team is also working on several other projects like support for PHP8 and quality patches for fixing critical issues. This helps merchants to get relevant patches to fix issues, so they don’t always have to rely on Magento to release bug fixes for their specific store.

AIM: Give us a glimpse into the Magento open source community.

Shikha Mishra: Magento open-source is free, flexible e-commerce software written in object-oriented PHP, It is currently owned by Adobe and named Adobe Commerce. Since it is free and open-source, many developers and maintainers work on it to fix existing bugs, add new features, and code reviews. There are multiple repositories available for Magento 2 open-source projects like Magento 2 core, Magento dev docs, Magento PWA studio, etc. Magento is purely community-driven and, of course, backed by the Adobe Community engineering team. There are more than 1,500 contributors and around 30 community maintainers for Magento repositories. It also has community forums and a stack exchange platform where several community members actively participate in Magento-related queries. One can also contact the Magento community engineering team through Slack and join community hangout meetings for more information regarding updates and new projects.

AIM: How does open source help in driving innovation?

Shikha Mishra: Software powers the world, and it influences every aspect of our lives. Organisations have recognised open source as an enabler of innovation since it’s the fastest way to produce dependable, scalable, and secure software. In addition, the fact that open-source software development is essentially a community effort helps it significantly. Instead of starting from scratch, developers can hunt for code that is currently accessible in the community, build on it, and reduce the time it takes to develop and distribute.

As a result, open-source has transformed software development and created a globally connected community of intensely collaborative developers. This collaborative software development culture is giving birth to a new generation of innovative companies that give back to open source as much as they consume it, allowing any organisation to build on cutting-edge software projects created by the finest developers from across the world.

AIM: How can being a part of an open-source community help aspiring developers advance their careers?

Shikha Mishra: Open-source helps developers improve their skills, project performance, add features and fix bugs. For example, if a developer is porting someone’s open-source library, they’re not simply bringing over code into a project but essentially bringing in a team of developers. The developer benefits from all of the other developers’ ongoing work to improve the libraries his programme is built on while providing them access to your code. It’s a win-win situation for developers. They can improve their abilities and have their contributions to the community properly recognised. In my case, the appreciation and recognition I’ve received from the GitHub community and core developers for my contributions have also aided my personal and professional development. It also inspires me to put more effort each day.

Also, the skills of a developer are demonstrated through projects and coding challenges. Their open-source profile acts as a resume, helping recruiters understand that the candidate has relevant experience with a specific set of problem types and has used a specific technology stack, among other things. This enables businesses to match candidates with the specific technical talents they require on a one-to-one basis.

AIM: What are your thoughts on the open-source community in India?

Shikha Mishra: In India, businesses have expedited their digital transformation, and the pandemic has prompted them to adopt more flexible working practices to continue promoting innovation and staying relevant. According to GitHub, India is now home to its third-largest community of developers, and 1 million developers in India created their first repository on GitHub this past year, more than any other country in the world, which is a testament to the fact that Indian developers are shaping the future of this industry and the country is also uniquely positioned to continue driving innovation that accelerates human progress.

AIM: What role can organisations play to lure more women to coding and STEM careers in general?

Shikha Mishra: Organisations should help women by implementing policies like flexible work schedules and extended parental leave and empowering women who are returning to work after a break. Also, create an environment that embraces diversity, respects all cultures, and promotes women in leadership positions. Any efforts that companies take to eliminate bias, including gender discrimination, will, in my opinion, eventually allow women to stand out and contribute more consciously and effectively to the organisation’s progress. In order to achieve this, I believe it is also important to promote women-focused development programmes, diversity training for employees, and STEM early in education and career.