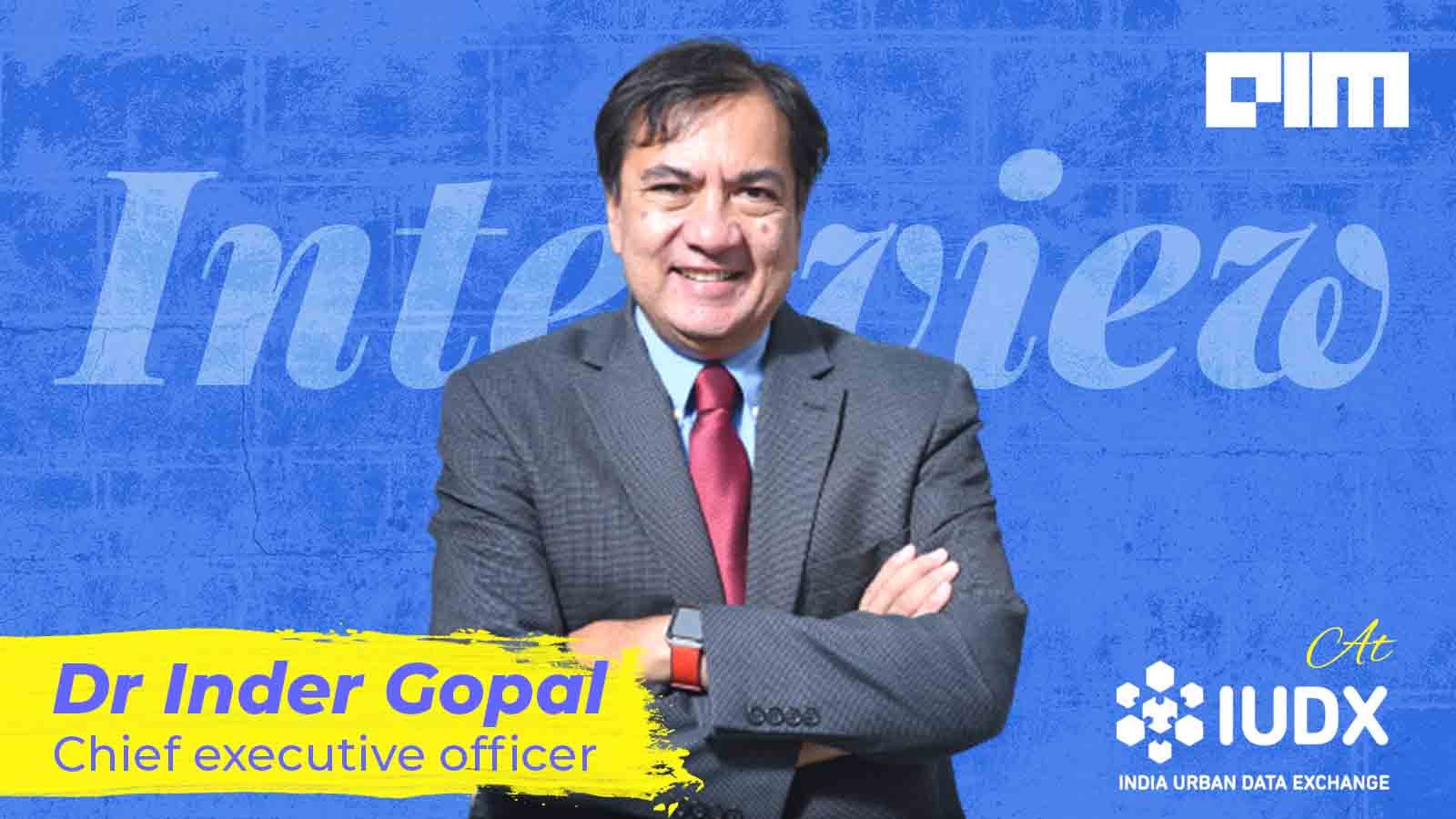 An Inside Look At Fetch.ai, The Ambitious Startup By Former DeepMind Investor

The Ministry of Housing and Urban Affairs (MoHUA) has prepared a guidance and framework document, DataSmart City, to encourage a data-driven culture in city planning and development. The strategy part of the document has three components: People, Process and Platform. The National Urban Innovation Stack (NUIS) was set up under the platform component with the objective to create digital infrastructure as a public good. The NUIS is envisaged as a shared digital infrastructure available for use by citizens, entrepreneurs, academics, administrators, governments, NGOs and other urban actors across the country. India Urban Data Exchange (IUDX) is a critical component of NUIS and is developed to help evolve standards, specifications, certifications, systems and tools for urban stakeholders to share data effectively for improved planning and decision-making.

Analytics India Magazine caught up with Dr Inder Gopal, CEO of IUDX, to understand more about the program.

AIM:Tell us about IUDX’s journey – from a concept to its present form.

Dr Gopal: In the year 2018, the Ministry of Housing and Urban Affairs (MoHUA) through the Smart Cities Mission awarded a grant to IISc to develop specifications for API and data schemas for data exchange and to create an open-source reference implementation. In the year 2019, we released the first public version of the IUDX technical specs for public comment and feedback and also signed up the first companies to join the IUDX Consortium to further our industry engagements. We also deployed pilot projects for the program in Electronics City, a township of Bangalore, and Pune Smart City.

The program received an institutional framework in early 2020 and the growth trajectory was defined for a period of 3 years, where IUDX is to be deployed in 50 smart cities in a phased manner. In the first instance, the platform was deployed in three cities — Surat, Pune, and Varanasi with one live use case each. Currently, there are seven cities under the IUDX umbrella each working on multiple use cases. We have also onboarded 31 datasets across these cities and actively engaged with eight industry partners for executing the use cases.

The IUDX Program Unit was officially launched on February 23, 2021 by MoHUA and the Ministry of Electronics and IT.

AIM: What is the IUDX deployment model?

Dr Gopal: Deployment of IUDX is a partnership between the IUDX team, the city administration, their vendors and system integrators and the ministry. The platform is considerably flexible when it comes to deployment and can be deployed as an entirely new entity or as an addition to any existing deployments. It is mainly deployed in its own cloud instance but could be deployed in a traditional on-premise model on need basis. The IUDX components (Catalogue, Consent, Data) along with the API adapters allow the existing data in their data platforms to be searched, requested, permitted, and exchanged.

AIM: Tell us about the cities where IUDX has already been deployed

Dr Gopal: We currently have three use cases that have gone live in the three cities – Surat, Pune and Varanasi.

By enabling data sharing on real-time traffic conditions and ticket collections in public buses through IUDX, the city of Surat has developed a mobile-based app for its residents to plan their travel more effectively. The app provides information on the exact arrival time and availability of seats on a particular bus, all in real-time.

AIM: What are the specific data-related challenges in terms of building smart cities?

Dr Gopal: Data is perceived to be the new fuel with the unique distinction of being infinite. However, the adoption of data-driven practices and utilisation of its full potential is hindered by certain factors:

High-quality data is not available:  The biggest inhibitor in sharing data is that the data is simply not available or of poor quality. Several critical health metrics are simply not being measured, or the measurements are sporadic and often inaccurate. Some of the reasons are organisational, the cost of measurement, lack of appreciation of the value of data, and lack of access due to large numbers and constant mobility.

Finding pertinent data:  If the data universe expands to a multiplicity of sources, how does a prospective data consumer locate pertinent data?  Currently, no catalogue or directory of data exists for users to identify and describe data.  Such a searchable catalogue becomes essential to create a useful data ecosystem.

Understanding the  data: Even if the data source gets identified, the same type of data is often represented differently from different sources. This may be as simple as different measurement units (eg. – Celsius vs Fahrenheit for temperature) or something more sophisticated as the object model for a data object.

Privacy and security policies for data sharing: Personal data about an individual should never be shared without the consent of the individual. It is of paramount importance that we clearly understand the opt-in and/or opt-out consents of individuals regarding collection, sharing, and deletion of data.  However, privacy concerns are often painted with too broad a brush and used as an excuse for a blanket ban on sharing data.  Personal data can sometimes be shared in aggregate or with appropriate anonymization without violating privacy. Moreover, while non-personal data is usually not subject to privacy considerations, these considerations are often invoked because of a lack of clarity in the interpretation.

AIM: What are the security and privacy issues that creep in while working on massive projects like Smart Cities Mission? What are the possible solutions?

Dr Gopal: There are several security and privacy considerations in the project:

Governmental support: The central government has been proactive in funding and advocating a data-driven model for urban governance. The National Urban Digital Mission was recently launched by the Ministry of Housing and Urban Affairs. The IUDX platform is evidence of this.

The scale and scope of urban problems are much higher than in almost all other countries. Often small countries are held up as “models” of data-driven governance, forgetting that the size of those countries is often that of a locality or two in a large Indian metro.  For example, a frequently quoted poster child of “Smart cities” is Estonia, which has a total population of 13 Lakhs. In contrast, the city of Bangalore, by itself, is nearly 100 Lakhs.

In addition, India’s diversity, economically, educationally, socially, and ethnically is unparalleled. Solutions have to be designed to bridge this diversity, offering services and benefits to all segments of society.

AIM: What are your views on the current data exchange policies in India?

Dr Gopal: India has been quite forward-looking in thinking through the value, benefits and potential pitfall of data sharing. The data privacy bill tabled in the parliament is a forward-looking document, which addresses many thorny issues in balancing individual rights with the public good. The previously mentioned report on Non-Personal Data is a visionary document, which takes a view of data sharing that emphasizes community rights and public good.

However, we do need to understand that data sharing is a new field and the data policies will have to be ever-evolving based on our collective learning as we take steps to use data for addressing everyday issues. We also need to bridge the gap between policy and its implementation to reap true benefits. The need of the hour is to educate and train personnel across the data sharing ecosystem to improve our understanding of the nature of a data economy.

An Inside Look At Fetch.ai, The Ambitious Startup By Former DeepMind Investor