Intuition Is The Most Important Data Science Skill, Says This Chief Data Scientist 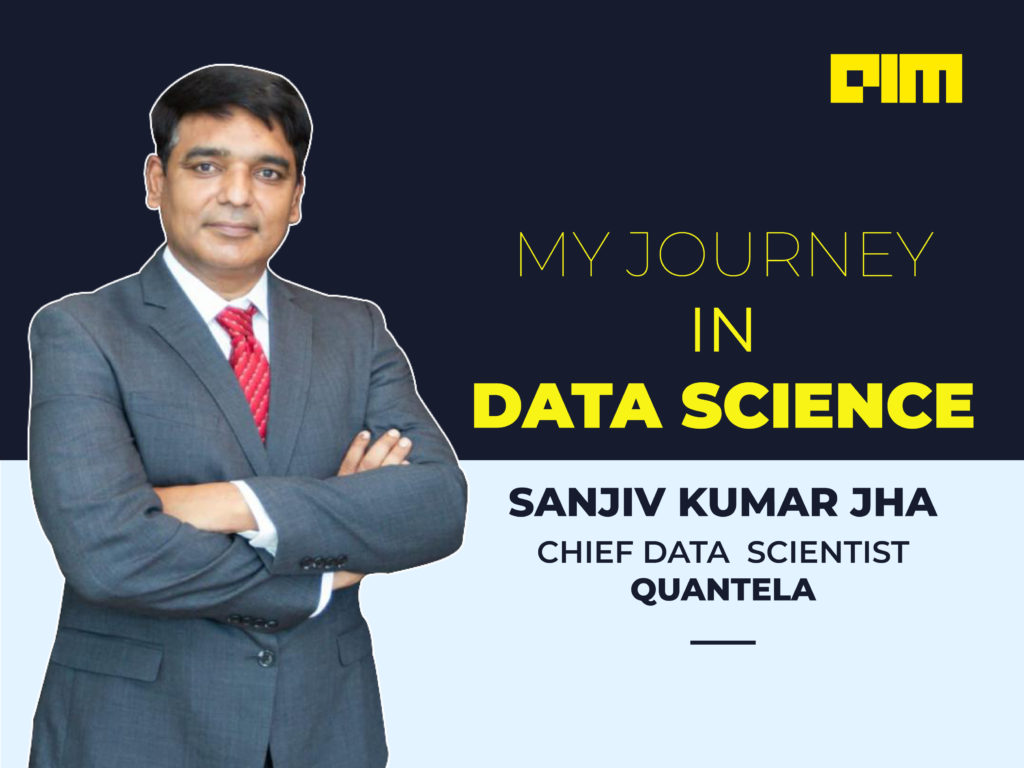 Analytics India Magazine got in touch with Sanjiv Kumar Jha, Chief Data Scientist of Quantela, for our weekly column My Journey In Data Science. Sanjiv shared his exciting journey with us and also suggested best practices for aspirants and working professionals to thrive in the data science space. He has over 20 years of experience in various IT roles, including software engineering, business analyst, data architect, and data scientist, at organizations like Yahoo, HCL Technology, Symantec Corp, EMC, and more.

Sanjiv completed his graduation in physics from Delhi University in 1991 since he wanted to be a scientist in the area of that subject. However, since computer science was touted as the next big thing, he pursued his masters in computer science from Jawaharlal Nehru University. Post his Masters, Sanjiv joined HCL Technology as a software engineer in 1996. Gaining interest in corporate, Sanjiv did his MBA from Santa Clara University in 2003 to understand how businesses work.

The first four years of Sanjiv’s professional career went into application development. But in 2001, he joined Libraria — a pharmaceutical company — where he was exposed to the potential of data while working on various drug discovery projects. He had to process and find insights from a colossal amount of molecule data.

“Later, I joined another firm that was into the analytic server in the storage domain. We had to deal with big data and leverage it to create a data platform,” says Sanjiv. “I was passionate about playing with data and kept learning various skills to analyze information while working at multiple firms.”

Although Sanjiv was working with data, his role was limited to business intelligence and developing data platforms. However, when he joined Pubmatic in 2012, he wrote algorithms that assisted the company in multiplying its revenue. This created a perception within the organization that he has impressive data capabilities. But since he wanted to relocate and move to Bengaluru, Saniv joined the sister company of Pubmatic, Komli Media.

Because Sanjiv was proficient with data and had exceptional data intuition capabilities, he was promoted at Komli Media to the position of chief data scientist when his predecessor resigned.

“I have never worked as a data scientist. I transitioned from a software engineer to a business analyst, then to a data architect, and later, to a chief data scientist,” explains Sanjiv. However, this journey into data science was not very straightforward. He kept himself motivated and continuously enhanced his skills. Sanjiv feels that people who want to make a career switch do not have patience. “They lose hope after a few failed attempts. Instead, they should focus on learning and grab opportunities whenever it comes.”

Although Sanjiv had experience in business intelligence and data architecture, he was not an expert in machine learning. However, since he was good at statistics, he did not struggle to learn Python programming, machine learning and deep learning techniques. Within a month after joining Komli Media, Sanjiv created a model that helped the firm gain 4x revenue uplift in one day.

“All my learning has come while working at the job. I try new things and implement them in my workflows. Back then, there was no practical book, neither a well-devised online course. But I used them to obtain whatever knowledge I could, and combined the experience that I had gained while working for various companies,” says Sanjiv.

To stay competitive in the ever-changing data science landscape, Sanjiv reads blogs, goes through Kaggle kernels – and other similar work – of practicing data scientists. He does not focus on books, and instead, goes after new models and research papers. Knowledge is endless, and one cannot learn everything. Therefore, his strategy is to narrow down sources and obtain in-depth knowledge.

At Quantela, Sanjiv focuses on building solutions for smart cities, which could be used for making policy that would drive smart city initiatives. He said his success comes due to the team he has built for the company. “I am mostly focused on the governance of the team rather than managing it.” This gives him enough time to contribute to the team by working on technologies like IoT, and satellite imaging, among others.

As a part of his job, Sanjiv also hires data scientists where he does not focus on certifications. However, he looks at the projects they have completed to understand their approach. “Machine learning and neural networks can be trained if there is a gap, but the attitude towards taking business problems and solving them is what differentiates applicants,” says Sanjiv.

Advice To Aspirants And Working Professionals

According to Sanjiv, setting timelines for learning is essential to be truly productive. For instance, if you want to learn time series modelling, put an end time to the learning and then start implementing all that you learn in the timeframe. The landscape is vast, so having the right strategy for learning and deploying is crucial to succeed as a data scientist.

Besides, aspirants should also focus on fundamentals and create a portfolio of projects by participating on Kaggle and other hackathon platforms. However, for professionals who want to make a career switch, they should try to advance data science skills and implement them in their current work to increase their chances of being successful.