PyTorch is one of the most popular open-source deep learning frameworks for creating and training artificial intelligence models. Of late, tech giant Microsoft has been showing a great deal of interest in one of the most demanding programming languages, Python. According to the statistics from an AIM report, Python continues to be the most popular language for data scientists. And general-purpose libraries like PyTorch, Pandas, NumPy and Sklearn, are only growing in popularity.

PyTorch 1.2 has various intuitive capabilities such as support for object detection and segmentation models such as mask RCNN, faster RCNN, and SSD, optimisation of models with constant folding, support for models that work on variable-length inputs and much more.

Deep learning has been gaining much spotlight in the present scenario. Due to which the machine learning frameworks have become traction for the developers these days. There has always been a kind of debate among the developers as to which one is better or which one should one choose, TensorFlow or PyTorch.

TensorFlow is the most popular machine learning framework when it comes to working with deep learning techniques. However, it seems that this year, the coin is flipping. According to this blog post, it has been seen that PyTorch is gaining dominance in the field of research. However, from the industry perspective, TensorFlow is currently the dominating framework with 13.7k stars on GitHub and PyTorch with 7.2k stars.

Below is a graph of PyTorch vs TensorFlow which shows the evidence of PyTorch gaining a lot of traction in the research community. 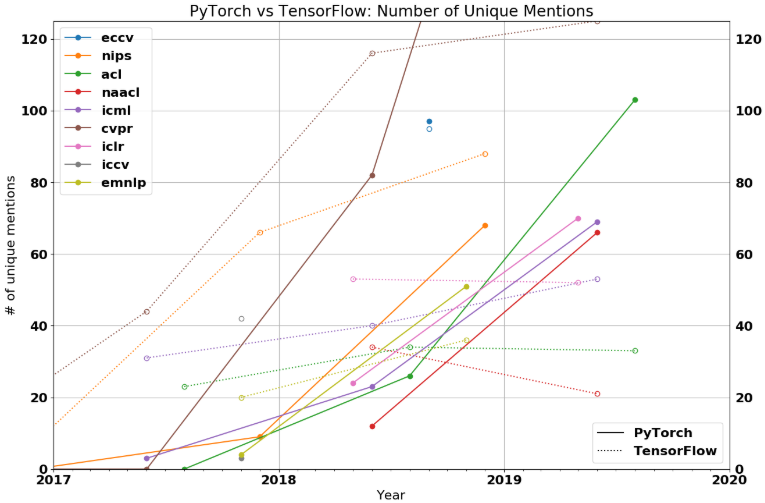 Not only is Microsoft integrating Python and its libraries in its ecosystem but it also launched a new 44-part video series known as Python for Beginners on YouTube for free. The video consists of lessons hosted by Microsoft Senior Program Manager, Christopher Harrison, and Business Development Manager at AI Gaming, Susan Ibach. These lessons will help both the versions of Python 2.x and 3.x.

Most of the time, people want to learn Python only because of its popularity. However, practitioners face difficulties about where to start or how to learn. For such issues, Microsoft has created a series of videos which will help a beginner to a quick start learning the programming language.

One motive of the tech giant behind all these is to ensure that emerging technologies like artificial intelligence becomes more accessible as well as valuable to everyone. The company is striving hard to bring all the possible advancements in this domain to the developers and researchers regardless of their platform. Now that PyTorch has been mostly adopted by the researchers for academia, it will be not too long that the industry will start adopting this framework for their intelligent projects.

PwC To Set Up New AI Lab In Kolkata, Plans To Hire 1,200 Techies