Making A Case For Art With GANs

Does art stop being art once it is deprived of its human connection; its creator? Where can one draw the line?  Should art created by non-human entities like AI be given the same stature as that of Picasso or Van Gogh?

Questions such as these have surfaced ever since the advent of GANs.

Artists like Mario Klingemann have been at the forefront of this new-age GAN-powered art. The works of Klingemann have garnered a lot of attention over the past couple of years and have been honoured with auctions by the likes of Sotheby’s.

Klingemann gave away with the application of traditional methods in creating paintings. Instead, he trained his neural network with thousands of portraits from around the 18th century and tweaked in his own layer of aesthetics by using the same preference model that social media applications like Tinder use for facial recognition.

The results of such an unconventional process were considered by the art lovers as being both attractive and repulsive at the same time. The mystics of this convulsive aesthetics might have almost created a genre of its own. If invoking an emotional journey fueled by imaginations, is what art is for then AI might have just made a case for itself. 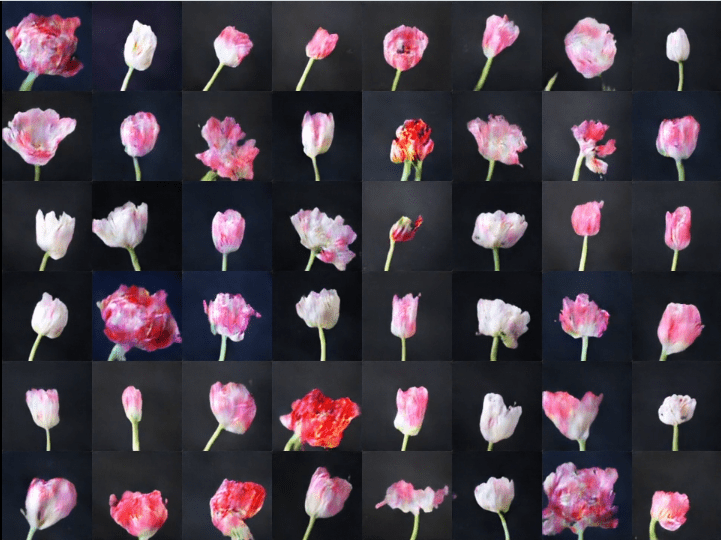 Anna Ridler, a researcher and most importantly an artist, has experimented with GANs in her recent artistic endeavours and created surreal imagery of Tulips. The popularity of tulips rose in the mid 17th century when a tulip-specific mosaic virus invaded the Dutch gardens.

This resulted in a peculiar intense dual coloured stripes on the petals which sparked the world’s first speculative bubble. At its peak, a single bulb of Viceroy tulip was worth twelve fat sheep, 1000 pounds of cheese and many other vanities which could satiate the needs of a humble village.

The rising tulip-fever nudged the prices into unreachable heights and with, it the disappearance of buyers. The rise and fall of the popularity of tulips do remind us of many other man-made speculative bubbles incentivised by the fear of missing out. And, one such mania of the modern era is that of the bitcoins. At its peak, Bitcoin witnessed a value of nearly $ 20,000 followed by a slump to $ 3,000.

So, Anna Ridler, who also works as a researcher in tapping the uncovered potential of machine learning, did what a creative genius would naturally of; create a meaningful art out of hazy, mistranslated imaginations of the human mind.

The training set consisted of 10,000 labelled photos of handpicked tulips throughout the Dutch spring. She then arranged the flowers based on their state of decay, colour and other such visible classifications.

And to cater to the unpredictable colour combinations of the Mosaic virus, Ridler, used the fluctuating Bitcoin prices to control the appearance of the flower. The stripes on the flower are in direct relation with the Bitcoin values.

What is even more remarkable about this project is, it doesn’t just stop at a visual depiction of a cryptic analogy but also introduces the botanical impossibilities or all the appearances tulips could have been- an artistic rendition of alternate reality.

In the case of Anna Ridler, right from the selection of the flowers from the Dutch floral markets to deploying GANs to draw a parallel between and entwine a visual story out of speculative bubbles, blossoming tulips and bitcoins is indeed as human as it gets.

Such a laborious process for an artistic endeavour surely matches that of any other traditional methods of creative art. In fact, to use traditional and creative in the same sentence is a sin on its own.

One might make an argument for AI by saying that it has only augmented human creativity. But there is something more to that than mere augmentation; the human subjectivity.

The aesthetically pleasing realistic faces were overshadowed by Picasso’s Cubism movement. Not that the people have started evolving into cubes but because of the triumph of imagination. Just like Einstein’s theory of relativity or composition of Vivaldi’s two violins in a minor.

Should we still abstain from considering AI generated art as art?