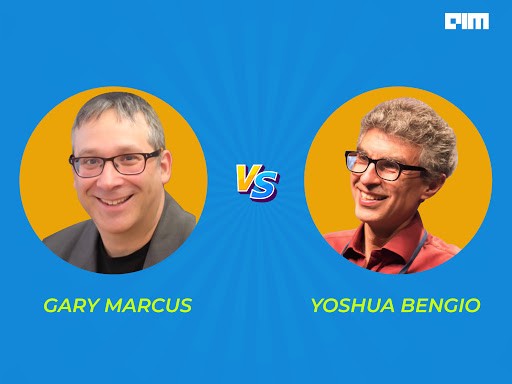 According to his website, Gary Marcus, a notable figure in the AI community, has published extensively in fields ranging from human and animal behaviour to neuroscience, genetics, linguistics, evolutionary psychology and artificial intelligence.

AI and evolutionary psychology, which is considered to be a remarkable range of topics to cover for a man as young as Marcus.

Marcus, in his website, calls himself a scientist, a best-selling author, and an entrepreneur. And is also a founding member of Geometric Intelligence, a machine learning company acquired by Uber in 2016. However, Marcus is widely known for his “debates” with machine learning researchers like Yann Lecun and Yoshua Bengio.

Marcus leaves no stone unturned to flaunt his ferocity in calling out the celebrities of the AI community.

However, he also, call it an act of benevolence or finding a neutral ground, downplays his criticisms through his “we agree to disagree” tweets.

Last week, Marcus did what he does best when he tried to reboot and shake up AI once again as he debated Turing award winner Yoshua Bengio.

In this debate, hosted by Montreal.AI, Marcus, in his speech, criticized Bengio for not citing him in Bengio’s work and complained that it would devalue Marcus’ contribution.

Highlights From The Debate

Marcus, in his arguments, tried to explain how hybrids are pervasive in the field of AI by citing the example of Google, which according to him, is actually a hybrid between knowledge graph, a classic symbolic knowledge, and deep learning like a system called BERT.

Hybrids are all around us

Marcus also insists on the requirement of thinking in terms of nature and nurture, rather than nature versus nurture when it comes to the understanding of the human brain.

He also laments about how much of machine learning, historically, has avoided nativism.

“I don’t care what words you want to use, I’m just trying to build something that works.”

While Marcus argued for symbols, pointing out that DeepMind’s chess-winning AlphaZero program is a hybrid involving symbols because it uses Monte Carlo Tree Search. “You have to keep track of your trees, and trees are symbols.”

Bengio dismissed the notion that a tree search is a symbol system. Rather “It’s a matter of words,” Bengio said. “If you want to call those symbols, but symbols to me are different, they have to do with the discreteness of concepts.”

Bengio also shared his views on how deep learning might be extended to dealing with computational capabilities rather than taking the old techniques and combining them with Neural Nets.

Bengio admitted that he completely agrees that a lot of current systems, which use machine learning, has also used a bunch of handcrafted rules and codes that were designed by people.

While Marcus pressed Bengio for hybrid systems as a solution, Bengio, patiently reminded how hybrid systems have already been built, which has led to Marcus admitting that he misunderstood Bengio!

This goof-up was followed by Bengio’s takedown of symbolic AI and why there is a need to move on from good old fashioned AI (GOFAI). In a nod to Daniel Kahnemann, Bengio, took the two-system theory to explain how richer representation is required in the presence of an abundance of knowledge.

To this Marcus quickly responded by saying, “Now I would like to emphasise on our agreements.” This was followed up by one more hour of conversation between the speakers and a Q&A session with the audience.

The debate ended with the moderator Vincent Boucher thanking the speakers for a hugely impactful debate, which was hugely pointless for a large part of it.

Why Marcus May Not Be The Best Villain

Gary Marcus has been playing or trying to play the role of an antagonist that would shake up the hype around AI for a long time now.

In his interview with Synced, when asked about his relationship with Yann Lecun, Marcus said that they both are friends as well as enemies. While calling out Lecun for making ad hominem attacks on him, he also approves many perspectives of his “frenemies”.

Deliberate or not, Marcus’ online polemics to bring down hype of AI, usually ends up hyping up his own antagonism. What the AI community needs is the likes of Nassim Taleb, who is known for his relentless, eloquent and technically intact arguments. Taleb has been a practitioner and an insider who doesn’t give a damn about being an outsider.

On the other hand, Marcus calls himself a cognitive scientist, however, his contribution to the field of AI cannot be called groundbreaking. There is no doubt that Marcus should be appreciated for positioning himself in the line of fire in the celebrated era of AI. However, one can’t help but wonder two things when one listens to Marcus’ antics/arguments:

There is a definitely a thing or two Marcus can learn from Taleb’s approaches in debunking pseudo babble. A very popular example could be that of Taleb’s takedown of Steven Pinker, who also happens to be a dear friend and mentor to Marcus.

That said, the machine learning research community, did witness something similar in the form of David Duvenaud and Smerity, when they took a detour from the usual “we shock with you jargon” research, and added a lot of credibility to the research community. While Duvenaud, trashed his own award-winning work, Stephen ‘Smerity’ Merity, investigated his paper on the trouble with naming inventions and unwanted sophistication.

There is no doubt that there is a lot of exaggerations related to what AI can do. Not to forget the subtle land grab amongst the researchers for papers, which can mislead the community into thinking vanity as an indication of innovation. As we venture into the next decade, AI can use a healthy dose of scepticism and debunking from the Schmidhubers and Smeritys of its research world to be more reliable.